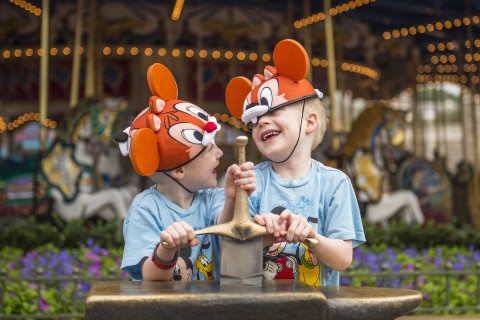 While Disney offers plenty for the young-at-heart, there’s something uniquely magical about visiting the House of Mouse as a kid.

“Mickey remembered me! Did you see?!”

Kids don’t get snagged in the stresses that sour trips for so many adults—they just imagine. A trip to the Most Magical or Happiest Place on Earth is an invitation to dream, to actually live out our favorite tales as part of the story. For kids, a trip to Disney parks is one giant adventure, and its all amazingly, mind-bogglingly real.

Maybe you were a Disney kid yourself and have fond memories of these moments, or maybe you’ve had the pleasure of taking a child with you and getting to glimpse their unique perspective. Either way, you might recognize these ridiculous (but kind of adorable things) you totally believed as a Disney kid…

1. Everything was WAY bigger

If you grew up as a Disney kid, you may remember a pretty significant difference about the parks: everything seemed so much bigger! From castles to mountains to coasters, everything at Disney parks seems enormous to the eyes of a kid.

Now, some of this is to be expected (being children are, well… small), but there’s something more to our childhood memories of Disney parks as larger than life. Disney parks frequently use a pair of optical illusions to make things look bigger. The first one is forced perspective--by making objects far from the audience disproportionately small while those closer are unusually large, you create an effect of massive size. The second trick is tip of the iceberg effects, where we actually can only see part of extremely big objects (the rest might be hidden behind foliage, buildings, or other decorations), but our brains convince us we can see the whole thing.

These tricks are already impressive enough to leave adults goggling (think of the floating islands of Pandora or the mountains surrounding The Black Spire Outpost in Star Wars: Galaxy’s Edge), but for a kid, these illusions make Disney’s mountains, buildings, and landscapes appear absolutely staggeringly huge. Big Thunder Mountain is as big as a mountain. Expedition: Everest looks like a distant glimpse at the real thing. Cinderella Castle may as well be Neuschwanstein, and if you grew up in the 90’s-2000’s, don’t even get me started on the Honey I Shrunk the Kids Movie Set Adventure…

The one that really stands out to me for this effect is Sleeping Beauty castle in Disneyland. As an adult, I’ll admit a day came that I walked into the park and the castle seemed tiny—like a great big dollhouse compared to Cinderella Castle. I seriously wondered if it’d been rebuilt or if I was just looking at some sort of reverse-forced-perspective.

In truth, Sleeping Beauty castle is just really small compared to its Magic Kingdom counterpart… but for most kids, you just can’t tell!

2. You were certain you almost died on EVERY thrill ride

Reaching the age where you hit the minimum height restriction for Disney’s thrill rides is a huge milestone for many kids. That magical mark opens up a whole new world of adventures… and potential brushes with certain death.

I had a pretty active imagination as a kid, and I remember vastly overestimating the danger factors on the full gamut of Disney rides. I wondered more than once what would happen if the cannonballs actually hit our boat on Pirates of the Caribbean. The Tower of Terror really could kill you if you caught the wrong elevator, and Injun Joe’s cave was certainly hiding a serial killer somewhere in its brooding tunnels.

Sometimes these cases were just Disney doing their job really well—like the secret mechanism in the queue for the Indiana Jones Adventure that causes the spike ceiling to start lowering (it actually did use to move nearly a foot—I confirmed this was not just my imagination)—but other times, my assumptions bordered on hilarious. How many kids have you met who were convinced the Haunted Mansion was really haunted or that you actually did almost go off the tracks on Expedition: Everest?

This habit of overestimating the perils of rides remained a habit of mine throughout my entire childhood. I was convinced if I turned around on the Matterhorn, I would see the Yeti bearing down on our heels. I refused to enter the Maharajah Jungle Trek for years because I took Disney’s vivid descriptions of the area to mean guests were just sort of expected to fend for themselves amidst the tigers, Komodo dragons, and giant bats.

I even remember panicking and bailing out the exit door right after the pre-show during of the ExtraTERRORestrial Alien Encounter because I’d become convinced I would be strapped to my seat with a bloodthirsty alien running loose in the room, breathing on my neck, slobbering on my head, and ripping unseen victims into bloody shreds in pitch darkness…

I think the biggest thing kids think is that the ride is really located inside the fascade-- the biggest one being the belief that when you ride Haunted Mansion, you're really going through the house that you see outside. Disney does such a great job of hiding the massive show buildings that you don't realize all that's happening behind the scenes! (And yes, as a child I really believed I was riding a hydrolator down to Seabase Alpha!)