Is It Time to Bury Dinoland, U.S.A.? Here's How This Land Was Designed, Declined, And What We Hope Is Next... 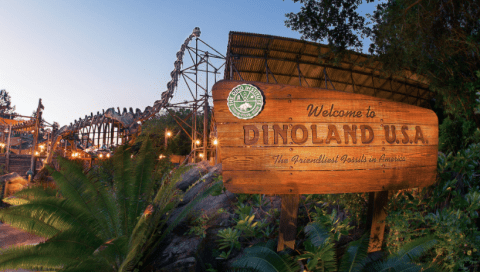 Look – it wouldn’t be the first time dinosaurs went extinct.

Since 1998, Disney’s Animal Kingdom has played host to an entire land dedicated to the ancient reptiles that once walked the earth. From day one, Dinoland, U.S.A. has been an oddity – a meticulously designed in-joke philosophically exploring humanity’s relationship with creatures we’ve only encountered through fossil evidence and feature films. But arguably, Dinoland has always fallen a bit flat… Anchored by a swing-and-a-miss attempt to relive the glory of one of Disney’s best rides ever, then accentuated by a fan-frustrating carnival, Dinoland has never truly entered the pantheon of great Disney projects.

And now, things are changing once again. With the recent news that one of the land’s few attractions will never open again, Dinoland’s looking more desolate than ever. So what if Disney were drawing up plans to replace Dinoland entirely? Today, we’ll take the trek through the history of Dinoland and toward the conclusion many Imagineering fans have already drawn (sometimes literally)... Could Animal Kingdom’s land of ancient animals become a land of ancient adventures? Here’s our in-depth assessment of how we got here...

To understand why Dinoland may be endangered, we have to remember why it exists at all.

Picture it: in the early ‘90s, plans for Disney’s Wild Animal Kingdom were already underway. A response to (and maybe, a rejection of) the era of the “Studio” park that had preceded it, Animal Kingdom would be “a new species of theme park,” dedicated to “animals real, ancient, and imagined,” with the latter two in particular ensuring that guests would recognize this new fourth gate as “Nahtazu,” but so much more.

By nature of reading this Editorial, you undoubtedly already know that the latter two of those lands – featuring “ancient” and “imagined” animals, respectively – were supposed to be the concepts that would most clearly and succinctly demonstrate that Animal Kingdom was worthy of Disney-level admission prices despite its admitted on-paper similarities to regional zoos. Which means you also know that as the park’s budget ballooned with back-of-house infrastructure, then-CEO Michael Eisney allegedly got cold feet about the ultra-ambitious park and its nail-biting costs in a post-Disneyland-Paris company.

Dinoland was famously greenlit, leaving the Possibilityland: Beastly Kingdom a mere legend in our library. But… why? What gave Dinoland an edge over its mythological sister?

Frankly, Dinoland, U.S.A. was born of a ‘90s pop culture convergence that was too good to pass up.

Given what was happening – and what was on the horizon – it’s easy to see why Dinoland was elevated above Beastly Kingdom. It was the right land at the right time; one that would cash in on the recently-revitalized pop culture coup of dinosaurs, rise to meet Universal and its new park, integrate a highly sought-after ride system into Walt Disney World, and set the park up for success thanks to the in-production film. As for the form it took?

Animal Kingdom’s Africa transports guests to the fictional – but not fantasy – waterside village of Harambe; Asia similarly sets guests down in the misty town of Anadapur at the foot of the Himalayas. Dinoland takes you somewhere, too… it’s just not quite as far away.

Look, we’ll be the first to admit to being “Dinoland Apologists.” In fact, Theme Park Tourist published a full, in-depth Declassified Disaster: DINOLAND feature that digs into the history of the land just to mount a defense against its critics. You can see and feel that Imagineers really did want to use Dinoland to transport guests somewhere new… in this case, to a sleepy town on a quiet highway somewhere between Texas and Florida, long-since surpassed by the Interstate. Just as much as any other land at Animal Kingdom, Dinoland is rich with history and story and detail layered on by Imagineers who are building a fake place that could exist in the real world.

In this case, it’s a story that begins with locals – like married couple Chester and Hester – whose long-standing gas station was a lone outpost in the quiet Diggs County… until the discovery of fossils brought archaeologists and grad students from around the world. Within, the land’s buildings tell the story of their ensuing re-use, with old fishing lodges become dorms and cafeterias for hungry students; with their professors gradually forming the Dino Institute in vacant Diggs County structures, gradually gaining funding...

...up to the opening of the more prestigious Dino Institute museum and research center, where the Lost Legend: Countdown to Extinction served as the land’s only chance to get face-to-face with real, living dinosaurs.

Put another way, Dinoland has a story as pervasive and rich and layered as Batuu. Like 1994’s New Tomorrowland at Magic Kingdom or 1995’s Adventureland in Disneyland, this was an early attempt at Imagineering’s land-wide continuity, with one overarching frame story explaining every ride, show, restaurant, and shop in the land. So why didn’t people love it?

The Downfall of Dinoland

Even when Disney’s Animal Kingdom opened in 1998, there consensus seemed to be that Dinoland, U.S.A. was an oddity… It just… didn’t fit. From the untamed beauty of the Oasis to the craftsmen village of Discovery Island in the fantastic roots of the Tree of Life, then to photorealistic and immersive lands recalling far-flung corners of Africa and Asia… Animal Kingdom is a park of artistry and romance; it explores how the story of humanity is inextricably tied to the animals and nature our civilizations have developed within and alongside.

Dinoland took that “idea” of exploration humanity’s relationship to animals and created a philosophically clever take without stealing Jurassic Park’s M.O. of literally positioning us alongside them. It explored how we, as people, have both revered and infantilized dinosaurs; how we take for granted that giant reptiles once walked the earth and instead turn them into caricatures in cartoons; patterns on baby bibs; action figures and stuffed animals… It’s a clever way of sticking to the park’s pattern, but it’s also very different from the rest.

Imagineers worked hard to create in Dinoland a physical place, and habitable and layered in history as Harambe or Anadapur. But Dinoland was still out of sync. Maybe it was “too close to home;” not exotic enough; maybe it didn’t have enough to do; maybe it just pales in comparison to Jurassic Park.

Or maybe its story was so deeply embedded – so layered – that most guests just didn’t even realize it was there. Most visitors, after all, don’t view lands as puzzles that need studied to be solved, but as places that need navigated to be completed.

And though Dinoland might’ve ridden the wave of ‘90s pop culture, the EMV, and Eisner’s shoe-in blockbuster movie Dinosaur to its completion, the land that didn’t fit didn’t get much better. In fact, it might’ve gotten worse… Read on as we dissect the downfall of Dinoland.

I want them to keep the dinosaur theme, only to improve it. Replace Dinoland with a prehistoric land featuring the Palaeozoic (includign giant bugs), the Mesozoic (including dinosaurs and pterosaurs), and the Cenozoic (including Ice Age giants, homonids, dodos, great auks, Tasmanian tigers, and quaggas}. It's important people can leanr about prheistory. And learning of extinct fauan can help them learn to be nicer to animals.
Here be ideas:

1. Change the Dinsoaur Ride to one in which the humans help the Dinosaur characters.
2. Add a Brother Bear Spirit Cave. Brother Bear be a grand movie. Would rock if the tourists see cave paintings and then enter some chamebr where the Spirits pop up with the Brother Bear's Transformaytion song.
3. Add a monument to Charles Darwin, Mr. Bones, Richard Owen, and more who help play their part on learning of prehistory.
4. Prehistric fauna should be feature on some walk-through info. Creatures such as dinosaurs, Ice Age giants, dodos, Carboniferous insects, Permian reptyles, homonids, and more.
5. The gift shop should be prehistoric theme. Selling toys, fossils, books, clothes, CDs, DVDs, and more.
6. There should be some Brother BEar show.
7. Some comical dodo can provie entertainment.
8. Tar pits can be feature.
9. A volcano can be add.
10. Some Galapagos tortoises, marine iguanas, Galapagos finches, and more cna be feature to fit Darwin.

I thought maybe they could just make a more scientific and distinguished take on dinosaurs that fits the scientific, distinguished atmosphere of the rest of the park. For example, have animatronic dinos running around fake zoo environments with plaques with facts on them like they have with the real animals. Have simulations where kids can see interpretations of what dinos looked like, a film where they can learn about them like the educational Circle 360 films in the World Showcase at Epcot. Maybe have an educational slow ride about dinosaurs. Decorate with replicas of dino skeletons everywhere. The hokey, cartoonish carnival of it all is what's the problem, just make a more serious dinosaur-themed park. I want dinosaurs, I like dinosaurs. Lots of kids love them as well.

How about reworking the land and renaming it Pangaea? People love dinosaurs and it fits with Animal Kingdom. The carnival theme doesn't.

1. Build a volcano (see DisneySea) as the land's centerpiece. The base of the volcano would contain dining and retail, while the remainder can feature a roller coaster, something like escaping from a T-Rex.
2. Next to the volcano, a jungle cruise style attraction but dinosaurs and other animals that lived during the time period.
3. Replace the dinosaur attraction itself (but keep the track layout and design) and re-theme it to Anthropods. Imagine oversized spiders and dtagonflys, etc. swarming the vehicle

make dino land go UP UP and away. And be replaced by UP.

I know arguably too IP-friendly, but you had me at "Gravity Falls"...