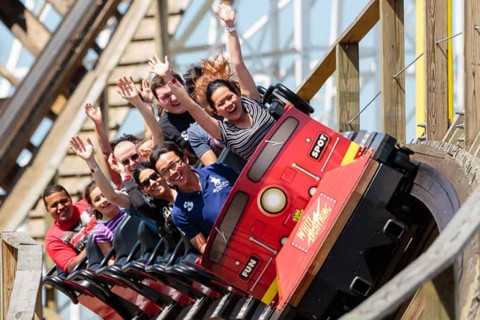 Central Florida kids’ memories were shaped by crowded July pool days, the Nickelodeon Hotel, and the classic—if not a bit tacky—“IT’S HUGE” Fun Spot commercials. I remember when the advertisements would come on in the commercial breaks between viewing of Sponge-Bob Squarepants, how the entire idea of Fun Spot was shrouded in mystery, amusement, and grandeur.

As I got older, though, Fun Spot took on a new reputation, one highlighting the dingier side of Orlando. My family never went to Fun Spot, and friends spoke of it as more of a joke than something “HUGE.” It was a park of cheap thrill, emphasis on the cheap, that Central Florida kids and families typically shied away from, bringing up more often as the butt of a joke than a legitimate option for things to do on the weekend. The park had a late-night Orlando allure often associated with discount steakhouses and 192 gift shops. Because of that, I never went. I bought into the infamy, and decided life was better spent far away from Fun Spot, even if it was just a hop, skip, and a jump away from my favorite local parks like SeaWorld and Universal.

But then I went to Fun Spot. Expecting at best a funny story to tell, I found myself developing a fondness for the two small Orlando parks, the stigma I’d built around them crumbling. The parks weren’t roadside dumps, but charming and eclectic remainders of hometown amusement parks.

Even though my own view of Fun Spot changed, the conversation for the most part has not. In many circles it’s still a joke, still a tacky tourist trap. That’s why I’m taking this case to court, in defense of Fun Spot.

What better place to start than the parks themselves? Fun Spot holds two Florida locations, one in Orlando off International Drive and one in Kissimmee close to Disney. (There is a third location outside of Atlanta, Georgia, but I will not be discussing this park in much detail here.) Fun Spot is a family-owned business with a history in Florida that dates back to the 70s. Starting as a chain of go-kart tracks, the parks slowly invested in larger attractions to pull in more guests.

In the past five years, both parks have undergone massive expansions, receiving wooden coasters that rival some of the best on this side of the country. Mine Blower, a 2017 addition to the Kissimmee park, is a Gravity Group wooden coaster featuring one inversion, a one-of-a-kind in the state of Florida. With an array of safe and popular flat rides including Hot Seat, an S&S Screamin’ Swing. This model can be found at large parks such as Busch Gardens Williamsburg and even Cedar Point, which many consider to be the best amusement park in the world.

Beyond the rides, Fun Spot prides themselves on their “Golden Rule,” which is to provide Safe-Clean-Fun for all. And though the park has received some bad press recently due to mask requirements being broken by guests, they are striving to create a clean and safe environment in the midst of the COVID-19 era, offering free face masks to guests and conducting temperature checks. The parks are surprisingly pristine year-round, with little trash found around the parks and a well-kept environment.

The staff, though more sparse than your typical Orlando theme park, is kind and helpful. There’s a hometown feel to the entire park, like you’re being welcomed into the Fun Spot family.

The "dinginess" I associated with Fun Spot was actually a charm, an against-the-grain style of running an amusement park that I hadn't seen before. When you're "spoiled" by giant parks, you don't get to know what a hometown park looks like. It might be imperfect and less-than flashy, but it's yours. Now when I pass Fun Spot as I cruise down International Drive, I'm filled with a sense of ownership, like it's my park.

Fun Spot parks aren’t just enjoyable…they’re smart. To say Orlando is a competitive environment for theme parks would be a massive understatement. The big three, Disney, Universal, and SeaWorld (which also owns Busch Gardens Tampa) are constantly at odds to pull in crowds. Though Universal and Disney are definitely bigger players than SeaWorld parks, all three parks compete for crowds through promotions, accommodations, rides, and park experience.

But Fun Spot isn’t competing for these crowds…they’re benefiting off these crowds. While the big three parks pull in large crowds, they close relatively early, leaving thousands of people without a place to go or a thing to do with the rest of their evening. This is where Fun Spot steps in.

Fun Spot’s hours differ from the other parks; they typically open in the late morning and close at midnight. Because of these later hours, tourists at Disney and Universal parks find themselves on the doorstep of Fun Spot for the rest of the night. The better the big parks do, the better Fun Spot does. Because any traffic into the Orlando area means more visitors to their roadside parks.

With this plan of capturing the leftovers from the big parks, Fun Spot can focus on being wholly themselves, not needing to actively compete with parks with much deeper pockets and different approaches.

Beyond their plan to gain visitors, Fun Spot has a payment plan which is unique to the Orlando area. While most parks require a hefty cover fee—and don’t forget parking—which allows guests to access most if not all attractions in the park, Fun Spot employs a pay-per-ride strategy. This means that to park at and enter Fun Spot, there is absolutely no charge. Rides can be enjoyed at a general cost of $10 per ride or roughly $50 for a day pass.

So why does this structure work for Fun Spot? Pointing back to Disney and Universal tourists left without a place to go after closing, these crowds are offered a completely free—and safe—place to walk around, grab a bite, and enjoy some rides at a cost. With free entry, more guests will be on the Fun Spot grounds, buying their food, drinks, and merchandise, and paying up-charges for their rides if they choose. The same cannot be said for the big players in Orlando.

So no, Fun Spot isn't like the other parks in Orlando...but they were never trying to be. Fun Spot isn't tied to a big corporation or pricey intellectual property to answer to. Though they operate under a smaller budget and a smaller scale, Fun Spot can do whatever they want. The parks have worked closely with the International Association of Amusement Parks and Attractions in hosting after parties for the annual Orlando conference. This pulls big names in the theme park industry into the parks while also drawing in press. For example, Great Coasters International chose to unveil their new steel track (similar to that of Rocky Mountain Construction's IBox track) at a Fun Spot-hosted event following an IAAPA conference.

Fun Spot Orlando and Kissimmee have exhibited great individuality, growth, and resilience in an ever-changing and always competitive theme park landscape, never sacrificing their hometown appeal and Golden Rule. They've taken small but sure steps year after year, marching to their own beat.

It's hard to tell where they'll go next, or what expansion is up their sleeve. There's no guidelines, no expectations, and no limits. One thing we can be sure of is this: the future of Fun Spot? It's huge.

Peyton is a writer and roller coaster enthusiast living just outside Orlando, Florida. She received her BA in Creative Writing from the University of Central Florida, taking classes by day and hitting the theme parks by night. When she's not in the single rider line, you can find Peyton playing music or at the movies.