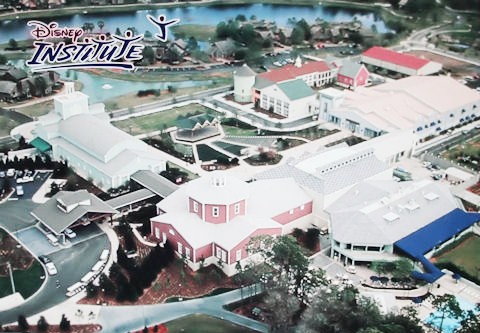 When’s the last time Disney did something different? Like, really unexpected? Something so out of left field – so completely out of the box – it felt like a reinvention and a risk? Think back to the days before box-office tie-ins and IP lands. When’s the last time Disney made a move that truly surprised and excited you? Disney English? The Disney Cruise Line? The Disney Vacation Club? Maybe!

But one thing’s for sure: one of the bravest, boldest, and most surprising moves at Disney in the last few decades is one that’s no longer around (except that it is) that you can no longer visit (except that you can): The Disney Institute was a really-for-real reinvention of what Disney could do. And today, it’s gone… kind of. Would you be willing to skip the theme parks altogether to live, learn, and lounge in a self-contained campus of immersive classes allowing you to expand your horizons? That's the risk Disney took with its Disney Institute experiment...

So what was the Disney Institute? A program or a place? A campus or a course? Did you study there or stay there? Does it continue, or was it closed? And for that matter, is it a Lost Legend missed by those who experienced it, or a doomed Declassified Disaster whose failings we should learn from? The answer is… yes. In today's in-depth, unabridged dive into Disney history, we’ll dig into the unusual history of one of Michael Eisner’s more far-flung pet projects; how it was conceived, where it came to life, why it disappeared… and how you can still experience it today.

“What is Disney World?” That’s the essential question faced by the leaders of Walt Disney Productions left behind after the 1966 death of Walt Disney. Strictly speaking, Walt himself had left a larger-than-life plan for what he’d hoped to do with Disney’s massive landholdings in Central Florida. The problem was that – as he was wont to do – Walt had seemingly moved on from his past pursuits and was thinking bigger.

His closest companions at WED Enterprises (today, Walt Disney Imagineering) tend to recall that while Walt was willing to build a “Disneyland East” near Orlando to secure funding, his real pet project was E.P.C.O.T. Walt’s Community of Tomorrow would be a test market metropolis; a city powered by corporate innovation; a master-planned, continuously-evolving model to act as a blueprint for cities around the globe.

And to make it happen, the Studio arranged a most peculiar agreement: the “Reedy Creek Improvement District,” a governing jurisdiction and “special municipal distict”  to provide Disney with the controls it would need in the pursuit and running of E.P.C.O.T., like oversight of building permits, road development, and sewer systems.

As we know, plans for E.P.C.O.T. died with Walt when executives left behind opted not to pursue such an ambitious reinvention of American life without him at the helm. However, the Reedy Creek Improvement District remained… and to this day, Walt Disney World benefits from the questionable legal arrangement wherein it technically grants its own alcohol permits and construction permits.

Given the loss of Walt and his keystone project, it’s probably no surprise that Walt Disney World defaulted to the form it took: the “Vacation Kingdom of the World,” anchored by Magic Kingdom, but accessoried by days’ worth of watersports, nature parks, resort hotels, campgrounds, boating, fishing, hiking, golfing, swimming, restaurants, equestrian trails, luaus, and more.

But even if it weren’t EPCOT, executives weren’t ready to abandon plans for a residential community in Walt Disney World quiet yet…

In June 1973 – nearly two years after the Magic Kingdom’s debut – Disney announced that its Buena Vista Land Company would soon break ground on an exciting expansion to the Vacation Kingdom of the World: a 1,200 acre community called Lake Buena Vista, constructed in the largely undeveloped land in the southeastern corner of the sprawling Florida property.

A true maestro of Disney history with an eye for detail, Passport to Dreams’ FoxxFur produced an epic, multi-part exploration into the history of Lake Buena Vista for the 2719 Hyperion blog – a must-read for Disney World fans who savor getting the unabridged story. For our purposes, suffice it to say that Lake Buena Vista may have been – as Disney’s publicity put it – “the experimental prototype of the experimental prototype.” This village was to be sincerely tucked away along a wooded inlet on “Village Lake,” presenting a beautiful and classically old-Floridian spot for homes and condos.

By 1974, Disney would construct 133 townhomes and 60 “treehouses” (supported on ten-foot tall pylons – a groundbreaking engineering marvel for the time), ingeniously set among the undisturbed woodlands of the area. So who lived there? Well… no one.

Instead, the reclusive rental properties tucked away in a forested, quiet corner of the resort along the northern wooded shores of Village Lake would be leased for multi-year use by corporations. Disney marketed the opportunity as “ideal for executive family vacations, customer entertaining, or sales-incentive-reward holidays.”

In other words, this quant collection of single-family dwellings would be filled, but by corporate executives or their chosen employees, awarded as an incentive; a quiet, charming little artificial village hidden away from the rest of Walt Disney World.

And in fact, they sweetened the deal with the 1974 opening of the Lake Buena Vista Golf Course and – that November – the Lake Buena Vista Club, one of the property’s first attempts at true fine dining (above, and in the lightly shaded peninsula northwest of Village Lake on the map below; take careful note of its shape and distinctive roof, which you’ll recognize later).

For at least a little while, these bungalows, townhouses, and treehouses (collectively, “villas”) and their associated golf course were very sincerely an escape from the action of the Vacation Kingdom; a faux neighborhood available only to those with connections. While Lake Buena Vista offered its own recreation, boat launches, and trails, this removed corner of the property felt a world away from Disney World. It probably would’ve stayed isolated, too… except that guests needed somewhere to buy groceries.

And while Disney did have plans to connect the Shopping Village and Lake Buena Vista neighborhood to the rest of the resort via a Monorail (with a PeopleMover route to nearby off-site hotels), neither ever came to be. That meant that the quiet, cozy Lake Buena Vista and its Shopping Village seemed certain to remain a tranquil community separate from the rest of the Vaction Kingdom.

However, in 1977 – just two years after it opened – the Lake Buena Vista Shopping Village was officially renamed the Walt Disney World Village to draw a more concrete connection to the rest of the resort. It stood to reason that Disney’s retail village could be a worthwhile attraction among the “Vacation Kingdom’s” lineup for all guests, not just those squirreled away in the hidden forests of Lake Buena Vista.

And in fact, Disney’s leaders clearly saw the value of the rebranded Walt Disney World Village… and all those villas around it. In 1980, the chalet-style Walt Disney World Conference Center was constructed adjacent to the villas of Lake Buena Vista (“M” on the map above) – available for small or medium sized meetings and conferences. Subsequently, corporate leases on the villas expired and Disney gradually repurposed the Lake Buena Vista bungalows, townhouses, and treehouses as hotel inventory for travelers.

Rather than being leased to corporations for the year, the villas were leased to visitors by the night. Officially grouped as the Fairway Villas (“L,” bungalows overlooking the golf course), Vacation Villages (“N,” townhouses along the lake), the Club Lake Villas, and Treehouse Villas (“O”), occupancy shifted in 1980 from corporate executives to out-of-towners drawn to the resort by its burgeoning reintroduction as a professional convention destination.

Think of the transformations that had occured around “Village Lake” just in the first decade of Walt Disney World’s history. Lake Buena Vista – once imagined as a residential community – had instead opened as a corporate client retreat before having its remote Villa neighborhoods repurposed as hotel inventory to support the Conference Center built nearby.

Consequently, the already-growing Lake Buena Vista Shopping Village got a rebrand and a new role… Rather than merely serving “residents” of the villas across the lake with sundries and groceries, the renamed Walt Disney World Village lived up to its identity by serving as an attraction in and of itself – a daytime and nighttime destination for all visitors to Walt Disney World offering dining, shopping, and entertainment.

In 1985, things finally began to come together. The Fairway Villas, Vacation Villas, Club Lake Villas, and Treehouse Villas scattered around the shores opposite the Walt Disney World Village were finally wrangled together and elevated to official hotel status as Disney’s Village Resort.

At this point, having wandered the grounds of Lake Buena Vista and watched its transformation into the Village Resort of treehouses, townhomes, golf courses, and country clubs, you must be thinking: what does any of this have to do with the Disney Institute? The answer is, you’re standing in it. Read on…

Excellent truthful article. I was an instructional designer at DI. All I in a add is that programs reported to the hotel leaders. HAVIng creatives report to budget focused leaders did not work. It was designed to fail.