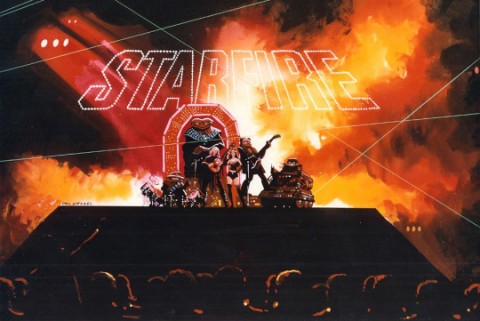 There is not now – and likely, has never been – a single thing to happen at Disneyland that could be described as “inconsequential.” Disneyland is hallowed ground. Every person; every attraction; every thing that has taken place there shapes – and is shaped by – Walt Disney’s original magic kingdom. Even still, there are plenty of times that monumental moments and pivotal people in the story of Disney Parks are left untold, fading from generation to generation until they disappear from the parks’ stories for good.

And that’s almost what happened to Halyx. Almost.

Directed by filmmaker Matthew Serrano and produced by (creator of the “Defunctland” YouTube channel) Kevin Perjurer, Live from the Space Stage: A Halyx Story is that most sought-after of Disney Parks ephemera: a lovingly-crafted, whole-hearted glimpse into a practically unknown and previously-untold moment in the story of Disneyland; a fresh story in a familiar place, spurred by the hazy recollections of a long-lost musical act on the Podcast: The Ride show.

Live From the Space Stage dives into Disney’s surprisingly earnest 1981 attempt to develop their own live rock ‘n’ roll act to populate the open air Space Stage in Disneyland’s Tomorrowland. Born of the age of The Empire Strikes Back and long predating the Lost Legend: STAR TOURS, HALYX was a sci-fi centerpiece. But unlike much of Disney’s pre-fabricated entertainment, Halyx was also a band with heart. Authentic songwriters, real musicians, and the brotherhood and heartbreak that come with being rock ‘n’ roll pioneers in the Happiest Place on Earth.

Exploring the casting, songwriting, costuming, contracting, and the single Californian summer that Halyx reigned, the film applies and amplifies what Perjurer’s Defunctland does best: it expands a mere footnote in the entertainment industry into a weighty, real, and consequential story. It pursues the lives and times of the very real people who defined a year of their lives – and in turn, shaped a year of Disneyland’s – as part of an out-of-this-world rock ensemble. Furry bassists, amphibian percussionists, powerhouse human vocalists, and robotic synthesizers; outlandish ’80s sci-fi couture; oil-based fog machines; lyrics that would send Walt Disney screaming from the room… And it all happened every weeknight before a blackout curtain of pulsating embedded fiber-optic stars and an increasingly adoring audience.

If, like many viewers, you’ve never heard of (much less experienced) a night among the stars with Halyx center stage, consider this stellar documentary a first-hand feature. Live from the Space Stage is a genuine Disney Parks treasure. It’s joyful, emotional, and earnest. And it proves yet again that any single, seemingly-impermanent moment at Disney Parks contains within it a story waiting to be told.

As to why so little evidence of Halyx remains? Record producer Mike Post mentions that the band’s masters and recording were largely lost since “there’s never gonna be a bunch of nerdy young people that come around and want to know about Halyx or want to hear it.” How perfect that the Disney Parks community is here in 2020 to prove him wrong, and how lucky that Serrano and Perjurer did it with such a celebratory spirit.

Live From the Space Stage: The Halyx Story debuts for free on the Defunctland YouTube channel on Thursday, August 20, 2020. In the meantime, explore Theme Park Tourist's own library of in-depth Disney Parks history features, our world-class LEGEND LIBRARY!