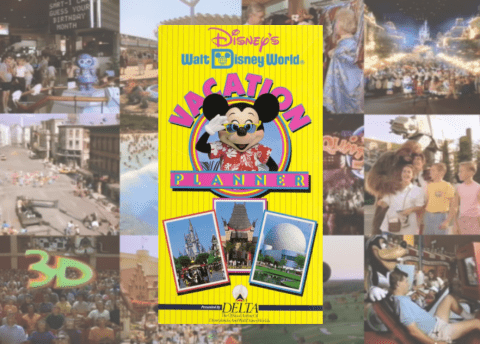 You can probably guess the top five most-attended North American theme parks in 1993 even now, almost 30 years later. As reported by the dearly departed Amusement Business Magazine, four of the five had Disney somewhere in the name. The fifth, bringing up the rear, was Universal Studios Florida at about 600,000 fewer guests than Disney-MGM Studios. That’s pretty well cut-and-dried but compare it with the magazine’s 1992 numbers and those turnstiles tell a story. The only Disney park in the country with a boost in attendance from ’92 to ’93 was the Magic Kingdom with a 4% uptick. The other Walt Disney World parks flatlined. Universal Studios Florida, however, jumped 10% across the year.

For a few dollars more, visitors could buy a two-day pass to Universal Studios Florida. For the price of two days at Disney, they could buy an annual pass at Universal.

Eisner’s vaunted “Disney Decade” was a third over by 1993 and the first big check, Euro Disneyland, had just bounced. Changes were planned for Walt Disney World. Some, like an E-ticket based on the 1990 franchise non-starter Dick Tracy, already fell off the drawing board. The biggest remaining swings wouldn’t happen any time soon. The resort needed a bump and fast.

Enter the repetitively titled Disney’s Walt Disney World Vacation Planner, presented by Delta Air Lines. Although Disney had been selling VHS souvenirs for years, most recently the 1991 double-header of A Day at the Magic Kingdom and A Day at EPCOT Center, the Vacation Planner was its first videotape distributed for free with the explicit intention of courting tourists. The souvenir tapes were about looking back to vacations past. The planning tapes were about looking forward to vacations not yet booked.

What better welcome than a rousing rendition of “Be Our Guest” with rewritten lines about “a kingdom so exciting, there’s no world that’s more inviting.” It’s the usual, all big hugs and bigger heads bumping noses with babies. But then some b-roll with cast members works into the montage. “Where y’all from?” asks a kindly older employee of a brightly dressed British family. “Make sure to say hello to Mickey Mouse for me, okay?” requests a concierge in pecan-pie lilt. The song isn’t even over and already a line’s been drawn. Gatorland may be quaint and Universal may be wild, but Disney is home.

Hotels are lavishly showcased with the insistence they were designed for budgets “from the economical to the regal.” The Jungle Cruise and Pirates of the Caribbean are brushed off quick and cute - a boy too little to handle his Ys sings his best Wo-Ho instead - so Splash Mountain can get its turn in the spotlight. Close-ups on screaming mouths. Logs fall at quadruple speed. You’d swear half the riders didn’t make it back to unload. And for anybody still playing dumb about where the source material, the voice-over promises it’ll “have you singin’ the songs of the South.”

When Space Mountain earns a talking head calling it “the scariest ride I’ve ever been on” and footage from the significantly spookier Phantom Manor is mixed in with the significantly sillier Haunted Mansion, you can see what they're selling.

It’s only fair, then, that Disney-MGM Studios gets the most attention. Or rather, The Disney Studios, since the MGM licensing deal was squirrelly about ancillary media. Whatever it’s called on brochures, the voice-over copy calls it “the most popular movie and television studios in the world.” By every measure but attendance as a studio-based theme park, that’s a bold-faced lie. It was already apparent just four years after opening that Orlando would never become Hollywood East - keen eyes will spot backlot trams driving down the New York Street sets, even though they were opened up to foot traffic by the end of the park’s opening year due in part to low production demand. But competition is competition and The Walt Disney World Vacation Planner came to play.

Cue the white-hot cameos from Ed McMahon and Dick Van Patten. Productions filmed in and around the park are rattled off not once, but twice. Every attraction that can explode does explode, sometimes from different angles worked in multiple times. Chewbacca cozies up for a family photo. An excitable Star Tours survivor says it “makes you feel like you’re part of the movie,” cutting as close as legally possible to Universal’s (in)famous slogan, “Ride The Movies.” Blink at the wrong time and you'll miss the park's dignified centerpiece and mission statement, The Great Movie Ride, entirely. There's plenty of time for the Teenage Mutant Ninja Turtles, though. Even by ’93, having the Turtles appear live and in shell was a hard hand to beat.

The EPCOT Center segment doesn’t try. Body Wars gets edited into a lather like Splash Mountain, but the Wonders of Life as a whole is sedately described as “better than science museums across the country.” Captain EO, the hippest attraction by a contemporary mile, earns the longest talking head of the tape likely to cover for the contractual reason not a single frame of the attraction film is shown. Though one guest casually predicts the future of EPCOT Center - “We learned a lot about nutrition and then we had junkfood” - the rest of the park’s high-tech half is breezed through in favor of its only edge on the upstarts down I-4 - class.

Culture and fine dining are all that matter in World Showcase. The three-headed troll of Maelstrom gets its close-up(s), but the sped-up drops feel more impatient than impacting. More than a few interviews are staged behind glasses of red wine. If viewers of appropriate age have any on hand, they could make a drinking game out of the word “authentic.” Chefs, waiters, and street performers alike are presented as the true attractions, only discerning tourists need apply.

But before any adolescent eyes glaze over, a happy family makes their case for the Disney vacation as an annual expense: “This is our fourth time at Disney and every time we come down here, there’s something new and different to do.” If that wasn’t convincing enough, they pop in again to say they went to Typhoon Lagoon twice in the same trip.

The interesting thing about calling Disney for vacation planning is that they use a phone number starting with 407 (the area code for the Orlando area). Normally, vacation companies would use a toll-free 800 number so people didn't have any long distance charges.
I wonder how long people would be put on hold or how long they would spend talking to a Disney vacation planner... and then how much would their phone bill be, at the end of the month?