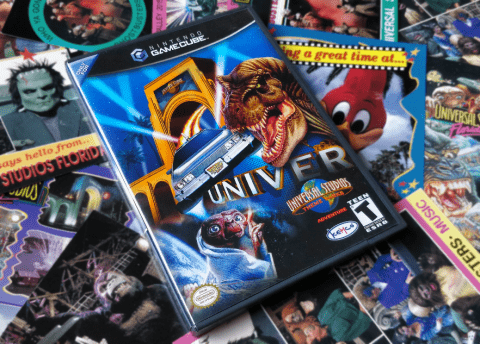 “If the real Universal Studios is anything like this game, we don’t ever, ever want to go.”

IGN managed to work that into their review before the first full paragraph. Considering Universal Studios Theme Parks Adventure was designed as a playable travelogue, that’s not necessarily an unfair conclusion.

On March 31st, 2001, Universal Studios Japan opened to record-breaking crowds. Early projections clocked the first year’s attendance around 8 million. By the end of the year, over 11 million guests passed under the studio arches, hitting the 10-million mark faster than any other theme park in history.

Not bad for the company’s first scratch-built international project.

Not good enough for some park officials at the time. One unnamed authority admitted their worries to The Japan Times: “Osaka isn’t a major tourist destination and, with all major media based in Toyko, constantly promoting Universal Studios Japan will be difficult.” More difficult still for overseas audiences, which supposed to account for every third spin of the turnstiles.

That’s probably why Universal Studios Theme Parks Adventure was released abroad at all, reaching North American shelves a week before Christmas 2001 and PAL regions in May of the following year. It was good timing. No matter the market, Theme Parks Adventure was one of the earliest third-party titles for the shiny, new Nintendo GameCube. It sold well, at least in Japan. By the end of 2002, some Blockbusters in the States were giving away copies for a dollar. So much for a paid advertisement.

Then again, given how meticulously all the serial numbers were filed off for gamers outside Japan, maybe publisher Kemco saw it coming. The studio arches on the cover have no location under the logo. The blurry pre-rendered arches in the game might say Japan, but good luck squinting that out in blown-up standard definition. Before you even get that far, the game presents a legalese splash screen making explicitly clear that it “is not a true representation of UNIVERSAL STUDIOS™ THEME PARKS but an interactive game based on UNIVERSAL STUDIOS™ THEME PARKS and some of the characters featured are not associated with the park.”

For kids unfamiliar with Universal Studios Japan, the ruse works. The virtual park as presented seems like a Frankenstein’s monster of Universal Studios Florida and Hollywood, with a hint of Islands of Adventure’s Jurassic Park section. The firehouse front of the dearly departed Ghostbusters Spooktacular lives on as the entrance to Backdraft. The Institute of Future Technology wears its west coast best, all grays and glass blocks. Waterworld is there.

Any amount of cursory research, though, and it’s plain as day - this is a “true representation” of Universal Studios Japan, right down to a gussied-up scan of the park map. The only unconditional positive of Theme Parks Adventure is the digital déjà vu of its pre-rendered streets. Between the familiar facades and the actual themes from Universal’s biggest franchises, there’s at least a contact high of the real deal.

The “untrue” representation, though, comes from the mini-game adaptations of the park’s (Universal-owned) headliners. The E.T. Adventure. Jurassic Park: The Ride. Backdraft. Jaws. Back to the Future: The Ride. The Wild, Wild, Wild West Stunt Show. Waterworld. The Japanese original Animation Celebration is included and similarly unrecognizable to its source material.

None of these mini-games are great. Some are barely functional. Given that the objective of the game is the same as any day at a theme park - survive the rides until the fireworks start - there’s no way around them, either.

The Wild, Wild, Wild West Stunt Show is the closest thing to good because it’s just a shooting gallery, but the only strategy is waiting for the bonus targets.

Back to the Future: The Ride gets the only faithful translation from attraction to video game. Players chase Biff through 2015 Hill Valley, then the Ice Age, and finally the very late Cretaceous Period, trying desperately to bump him back to the present. It plays like any given racing game, only the DeLorean handles about as well as a hovercraft pushed around by ceiling fans. With no other obstacles besides Biff and little sensation of actual speed, this is a sad testament to the attraction that sold Steven Spielberg on Universal Studios Florida so long ago. It's also the hardest mini-game by a Hill Valley mile, necessitating replays that don't help its first impression.

Jurassic Park: The Ride considers the spirit of the blockbuster film, in which no gun is ever seen being fired, and rejects it in favor of mounting a laser cannon onto the back of a Jeep. Even novice players can expect to blow away over 200 velociraptors alone. Though it’s disconcerting long before the aiming system gets in the way - the reticle doesn’t represent where shots land so much as where they’re headed about ten feet away from the barrel - this is easily the most replayable game of the bunch.

Backdraft is easily the least replayable game of the bunch. In place of Kurt Russell, the player’s adolescent avatar of choice must rescue a bunch of people from a raging inferno. But each playthrough takes a full 15 minutes, it’s ultimately guesswork as to where anybody is stranded, and the directional controls change with every new camera angle. Any remaining goodwill should be worn out by the final room, an absolute onslaught of flying barrels and heat-seeking fireballs that is functionally impossible if players didn’t find enough extra hearts earlier on.