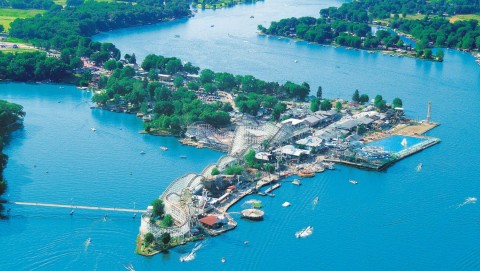 “Charm” is the word most commonly associated with beloved boardwalk park Indiana Beach. Though the midwest is not lacking for great amusement parks, with top-tier Cedar Fair and Six Flags parks seemingly everywhere you turn, Indiana Beach Boardwalk Resort has made a habit of straying from the status quo since its opening nearly 100 years ago. The park is relatively modest in size, with no record-breaking attractions or ownership of any mainstream intellectual properties. A quiet park. But when Apex, the park’s operator, announced its closing in February of 2020, the response from the community was anything but quiet.

If you’re not from Indiana, you’ve probably never heard the Indiana Beach story. But you need to.

Because we all have a home park, we all experience that swelling in our chests when we think on memories of kiddie coasters and log flumes, and we all love a comeback story.

Indiana Beach Boardwalk Resort opened in 1926 under the name Ideal Beach in the town of Monticello, Indiana. Less than two hours from both Indianapolis and Fort Wayne, the peninsula location on the Tippecanoe River made for, well, the ideal tourist destination for nearby locals and city travelers alike. Earl Spackman and his family owned and operated the park for years, gradually adding to the space with dance halls, family rides, and live music. It was the place to be.

The park grew rapidly, running out of space in its opening years. Even in the midst of the Great Depression, Spackman expanded and expanded until he had purchased all the land on the peninsula. Taking over the legacy of his father, Thomas Spackman gained ownership of the park in 1945. The place was a family park, through and through. Owned by a family, operated by a family, and made for families. Faced with steep summer competition in the next 20 years, Thomas Spackman filled in his father’s shoes and then some, constantly innovating and expanding, including but not limited to the park’s name change to Indiana Beach in 1952.

The town of Monticello and the amusement park were inseparable; you couldn’t have one without the other. A go-to spot for a Friday night and the standard first job for students in the area, the park was a living legend in a small town.

The Apex of Indiana Beach

In more recent history the park has added some crowd-pleasers, like Lost Coaster of Superstition Mountain, an exceptionally odd and equally beloved Custom Coasters International roller coaster that features elements such as an elevator lift hill (similar to that on Cobra’s Curse at Busch Gardens Tampa) and multiple enclosed sections weaving in and out of an artificial mountain. Steel Hawg came as the park’s most recent addition in 2008. An El Loco model from popular steel manufacturer S&S, this ride specializes in tight turns and steep drops (the steepest of which being 110 degrees) in a compact layout. This coaster was designed by Alan Schilke, the man, myth, and legend behind Rocky Mountain Construction creations such as Steel Vengeance at Cedar Point, Lightning Rod at Dollywood, and the (hopefully) soon-to-be-opened Iron Gwazi at Busch Gardens Tampa. Not a bad addition for a small boardwalk park.

The park underwent a series of ownership changed through the late 2000s and 2010s, ultimately landing in the hands of Apex, an amusement operator perhaps best known for operating Fantasy Island in Grand Island, New York near Niagara Falls. The acquisition came with its pros and cons. On the one hand Apex was an established park operator that brought newer, flashier rides to the hometown park. But wasn’t the point of Indiana Beach that it was just a hometown park, run by a family who knew the area like the back of their hand?

In this acquisition a lot was gained, but what was lost was the core of Indiana Beach’s identifying factor: its charm.

Mere weeks before the COVID-19 pandemic would shut down theme parks across the country, Apex made an announcement that shook the state of Indiana and beyond. On February 18, 2020, Apex put out a statement announcing the unfortunate news that Indiana Beach would not be opening for its 2020 season. They later filed for chapter 11 bankruptcy, and have maintained the fact that they closed the park strictly for financial reasons. With the park already in the off-season, this left lovers of Indiana Beach with no goodbyes and no last rides at the park that raised them.

Almost everyone has memories of heading out to their home park as a child. I remember Universal Studios: Jaws, churros dipped in chocolate sauce, the mist of the Universal globe hitting my face after a long hot day at the park. Odds are you have memories like this too, no matter your location and no matter your home park. Now imagine that park being closed for good, without warning and without a proper sendoff. This was the reality for those who called Indiana Beach their home park.

The town of Monticello suffered as well. Without Indiana Beach there to pull in visitors, the town would drastically suffer from the loss of local income. They would suffer so much, in fact, that they actually offered three million dollars in incentives to anyone who would purchase the property. Monticello locals took to the streets, protesting the closing of the historic park.

I'm late to comment here, but I wanted to thank you for highlighting this park. Though my true home park is Michigan's Adventure, I have fond memories of visiting my family in Indiana while I was a kid, and those weeks always included a trip down to Indiana Beach. It's good to see a spotlight on smaller parks and to focus on what they do well.