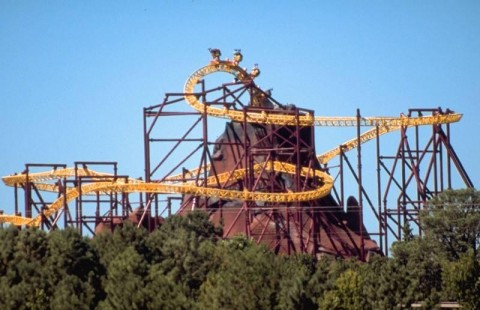 Lost Legends… Rides so spectacular in scale and so incredible in their experience, their stories are shared through generations. Here at Theme Park Tourist, our Lost Legends series has spent years slowly collecting the inside stories of forgotten rides from around the globe: the Big Bad Wolf that huffed-and-puffed its way through Busch Gardens, the icy, forgotten Curse of DarKastle, the monstrous Son of Beast and dozens more.

Today’s tale is particularly raw for fans of Kings Dominion near Richmond, Virginia, where an entire mountain fell, taking with it one of the most extraordinary and extreme roller coasters ever made. VOLCANO: The Blast Coaster was sincerely one-of-a-kind, using prototype technology to launch guests vertically up and out of a flaming, steaming, rumbling peak.

How did Volcano come about? What was it like to take on nature’s greatest force? What happened to make this active peak go dormant? Dig in to the full story, then be sure to share your memories of this explosive coaster in the comments below.

As odd and it may sound, the story of one of the world’s most intense roller coasters begins with The Flintstones, The Jetsons, Yogi Bear, Scooby-Doo, and the Smurfs. That’s because in 1966, a Cincinnati, Ohio-based television company – Taft Broadcasting – purchased Hanna-Barbera, acquiring the rights to those characters and essentially owning Saturday morning cartoons for a generation. Taft suddenly owned an intellectual property catalogue that would make Disney jealous, and had an idea of how to use it.

In 1969, Taft purchased Cincinnati’s Coney Island – a small amusement park along the Ohio River – which had been devastated by a number of floods. Their plan was to relocate what they could of Coney Island to a new, custom-built park on newly acquired land northeast of Cincinnati. There, they’d leverage the layout and lessons learned from Disney’s own 1971 Magic Kingdom and their acquisition of the Hanna-Barbera library to create one of the first modern theme parks based off Disney’s tradition.

In 1972, Kings Island opened with all the standards you’d expect post-Magic-Kingdom: a grand entryway (International Street) leading up to a park icon (a 300-foot-tall Eiffel Tower) with “spoke” paths radiating out into themed lands like Rivertown (an old Ohio settlement), Oktoberfest, Coney Island (featuring the world-record-breaking twin white tracks of the Racer), and of course, the Happy Land of Hanna-Barbera.

Following the success of Kings Island, Taft set out to expand into a new region of the country, settling on a 400-acre site in Dowell, Virginia (just north of Richmond). The heart of the Mid-Atlantic, this East Coast park would be an attractive option for both residents and tourists from Richmond, D.C. Baltimore, Raleigh, and Norfolk. Given that this new sister to Kings Island would become an icon of “The Old Dominion,” the Virginia park was named Kings Dominion.

When Kings Dominion opened in 1975, it had a lot in common with its sister park in Cincinnati: an International Street leading to an Eiffel Tower with branches off to the Happy Land of Hanna-Barbera, an Old Virginia mining town (opposite Kings Island’s Rivertown), and even a Coney Island with a dual racing wooden coaster.

But of particular interest today is a land Kings Island had not opened with: the Lion Country Safari.

The Lion Country Safari had actually opened before the rest of Kings Dominion. It was used in 1974 as a “preview” attraction, allowing guests to drive their own personal vehicles on a route through actual zoological exhibits stocked with big cats, elephants, lions, rhinos, antelopes, and giraffes.

When Kings Dominion officially opened in 1975, the roadway was replaced with ride. Now, guests would begin their journey in the Lion Country Safari land – a thatch-roofted adventurers outpost recalling African encampments – and board a monorail (yes, a monorail!) that would carry them through the 20-minute tour of animal habitats.

In 1979, the remote Lion Country Safari would gain an equally-adventurous neighbor in one of the largest expansions the park had ever seen… No, not a volcano. At least, not yet.

In 1979, the park debuted the Lost World. This craggily peak reigning 170-feet over the park (nearly as tall as Cinderella Castle) isn’t so different from the never-built Discovery Mountain once planned for Disneyland Paris in that the mountain itself would’ve concealed an entire sub-land with multiple rides and attractions of its own. Decades before Disney would attempt it, Kings Dominion did it.

The multi-ride complex quickly became the park's signature attraction, its fantasy peak rising above the forests of Virginia – a scale few would've expected of a regional park.

In fact, the Lost World was an intertwined complex containing three attractions:

While the scale of the Lost World was grand (in fact, the $20 million expansion was said to be the largest and most expensive theme park expansion project ever undertaken outside of Disney's parks), the attractions inside weren’t entirely timeless.

As a matter of fact, both dark rides would undergo substantial rewrites within a few years, each elevated to their long-lasting and most recognizable forms.

In 1980 – the year after the Lost World’s debut – the Journey to Atlantis flume ride was redesigned as The Haunted River – a ride many Virginian natives will recall. From a black light “Piranha River” and gag-filled Ancient Egypt to a graveyard and Pirates-of-the-Caribbean-influenced shipwreck, the attraction was surprisingly robust for a regional, seasonal park, and as a re-theme nonetheless!

For a generation of locals, The Haunted River may have been a test of courage for young kids. But in 1984, its upstairs neighbor became a family’s best friend. In 1984, the Land of Dooz was recrafted around Hanna-Barbera’s popular Smurfs franchise. The ride (and indeed, the entire mountain complex) was renamed Smurf Mountain in honor of its newest inhabitants.

The musical Smurf Mountain might’ve seemed like just the kind of classic family dark ride that would be beloved even to today. You can almost imagine generations of guests meeting the Smurfs through an oddball dark ride at Kings Dominion, maybe even believing the characters to be original creations designed just for the attraction. However, that’s not what happened… Kings Dominion was about to be changed forever by a new owner who had big ambitious for the Lost World mountain… Read on…

I was SOOO Lucky to visit the park for the first time in Spring of 2018 before it closed. So glad I got the credit before disappearing!

In this era of copycat coasters (it seems like everyone has one giga coaster, one drop coaster, one flying coaster, etc) Volcano was truly the most unique ride I have ever ridden. I miss it terribly.

You hit the nail on the head. One-of-a-kind. Purpose-built. Designed around an existing structure... We don't see many rides like this anymore...

Wonderful article. Thanks for all your effort in this.

Is Carowinds Worth A Visit? New Themed Land Is Coming In 2023