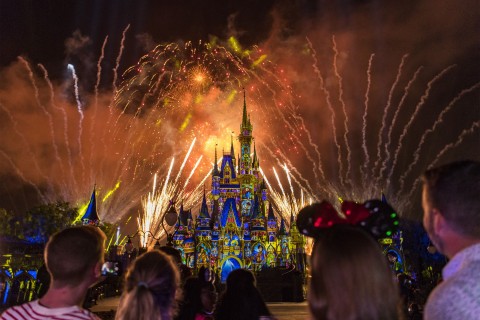 The idea of Disney without fireworks definitely feels weird…

Fireworks have become an inseparable part of the Disney parks experience, to the point that Disney as a company remains the largest fireworks consumer on the planet. It was barely one year after Disneyland opened in 1956 that the park launched their first nightly fireworks shows as an incentive to keep guests in the park until closing. These original shows weren’t exactly the mind-boggling extravaganzas we’ve come to expect from Disney—their original shows were entirely run by one man (Mickey Aronson) sprinting between rockets to light fuses, hopefully not leaving any long, awkward gaps.

Tracking the history of fireworks at Disney’s US parks is… a complicated endeavor to say the least. Our own David Mumpower did an excellent job detailing the early history of Disney’s original fireworks show, Fantasy in the Sky, and that’s an in-depth story in and of itself. While Magic Kingdom has had a fairly straightforward history with only four major shows, I quickly realized when researching for our recent article How to Deal with Disney Parks Withdrawal with STYLE that if you start considering all of the shows at Disneyland, Epcot, and Disney’s Hollywood Studios, you will quickly find yourself tumbling down quite the rabbit hole in Wikipedia freefall.

We don’t want to break your brain, dear reader. We sifted through this soul-crushing mind-map to trace the highlights of the strange, eclectic, and feels-inducing history of fireworks at Disney’s US parks.

The birth of a Fantasy in the Sky

Walt Disney’s dreamed of building a park where guests could experience their favorite stories brought to life—a place where magic became real. Nightly fireworks became an important part of this vision, and in 1958, the show was dubbed Fantasy in the Sky. Just a few years later, the company hired Tiny Kline in 1961, who had previously worked with Disney for a concert event, to play a nightly role as Tinkerbell flying from the Matterhorn across the sky in front of Cinderella Castle. Tiny was 71 years old at the time (!), and she repeated the role nightly until shortly before her death in 1964. Despite the popularity of the shows, as the years wore on, the company recognized they had a lot of learn about the business of fireworks.

One of the most significant turning points was when Disney discovered new ways to program fireworks. That opened the door for fireworks shows to follow precision timing that matched sweeping soundtracks. The company also underwent a philosophic change. They realized they could view fireworks shows the same way they viewed animated films—that every fireworks show is a story being told. The famous adult Mouseketeer, “Big Roy” Williams, played a major part in upgrading Fantasy in the Sky to the first of Disney’s great spectaculars.

The real launch to the next level took place on October 1, 1971, when Walt Disney World’s Magic Kingdom opened. Fantasy in the Sky made the jump across the country for the park’s debut, but Disney took the opportunity to expand the show to grand levels. Walt Disney World didn’t suffer from the same space and noise constraints that Disneyland did, and that meant their version of Fantasy in the Sky could be bigger and better than anything the company tried before. The new show was met with widespread acclaim and remained a mainstay in the park for three decades!

Disney’s nightly entertainment scene remained largely unchanged until a key event—the opening of EPCOT Center in 1982. Within a month, Disney introduced Le Carnival de Lumiere, a first-of-its-kind show that used rear-projection barges paired with fountains and fireworks to produce dazzling effects across the World Showcase lagoon. The only problem was it could only be viewed from certain points in the park.

In 1983, Le Carnival was replaced with A New World Fantasy which incorporated synthesized classical music and new lighting effects. The show was rebranded again the following year as Laserphonic Fantasy, the very first Disney show to utilize laser effects projected on a water screen (an important leap forward that would eventually lead to another famous water show).

The real game changer came in 1988. Laserphonic Fantasy was rebranded as IllumiNations. The new show was set to a full orchestra soundtrack and introduced dazzling tributes to each of the original World Showcase nations (Norway wasn’t opened yet and when Morocco was added, it was left out of the show out of respect for the pavilion’s religious architecture). IllumiNations was a heart-thumper of a show, a grandiose symphony of water, lights, sweeping music, and a stunning fireworks ending. If you picture fireworks every time you hear Ode to Joy, you probably saw IllumiNations as a kid.

IllumiNations became Disney’s most innovative show to date and remained a mainstay in EPCOT Center until 1996 when the classic show was replaced with IllumiNations 25—a new version concocted for Disney’s 25th anniversary. IllumiNations 25 featured an entirely new soundtrack without classical music, flashy new effects, and incorporation of nations beyond those in World Showcase. Ironically, this same name was tagged to two different shows. In 1997, the show returned to using classical music, and the anniversary references were removed.

IllumiNations remained the same until Disney’s Millennium Celebration in 2000 when a final version debuted. IllumiNations 2000: Reflections of Earth took the show to the next level with an epic new score, insane new fireworks and light displays, and the introduction of a new globe barge that could both project images and open to reveal a massive flame. Effects were synced up across Epcot, including using Spaceship Earth as part of the projections. The show would remain part of the fabric of EPCOT until it closed in 2019 (after losing sponsorship) to be replaced by the temporary show Epcot Forever.

With AR and location based technology I don't see why Happily Ever After couldn't go virtual for the time being. The technology is there for a guest to just be in front of the castle or on Main Street and stream the show at any time, eliminating the need for all the crowds.