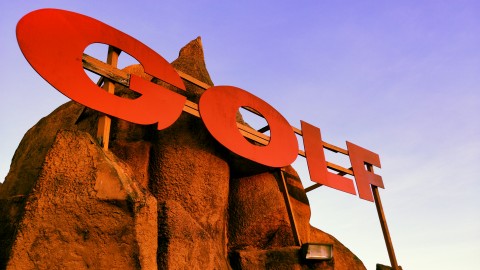 The heights, depths, tension and triumph of full-sized golf simmered down in a crucible of tiny windmills and unnaturally blue water to the rawest essence.  A club, a hole, a brightly colored ball and glory.

Since the dawn of its creation in 1912, as a sport crudely dubbed "Gofstacle," miniature golf has ricocheted between the cutting edges of themed entertainment and landscaping, bounced off one of the bricks at the edge of the green and landed in the rarefied bushes of athletic purity.

Each hole is a fresh test of every skill, trick and talent in the (mini)golfer's arsenal. The one that's pretty much a straight shot, but there are like logs poking out of the ground so you're not sure. The one with three holes that are actually just tubes that send your ball to the rest of the green and it's apparent two of them aren't even going to put you in the same zip code as the real hole. The one that looks like a kidney.

Miniature golf is the very soul of sport cloaked in a family-friendly veil of good cheer and ample parking.

It makes perfect sense, then, that it has taken root nowhere so ferociously as Central Florida.

The tourist corridors of International Drive and 192 are littered with the remains of a hundred dead courses, man-made volcanoes left behind like the tombstones of gods long forgotten.

But what of the living?

In no particular order, here are my personal selections for the six must-play courses in the Vacation Capital of the World.

There are three Pirates Coves around Orlando, not counting its Kissimmee cousin Pirates Island. If you've only got time to play one, accept no substitutes.

Secluded at the back corner of the Crossroads plaza, located inconveniently at the Disney Springs traffic jam, Pirates Cove has aged gracefully into its surroundings. Wait until the sky starts to blush and the halogens hum to life and you might just mistake its mountain for the real deal.

Like all the Coves, it features two courses, Captain's Course and Blackbeard's Challenge, with one obviously more difficult than the other. Neither will end with your club through the windshield of a rental car out front. Both are worth playing and not a bad deal at $5 for another round. If you bring a coupon - read it closely because some Pirates Cove coupons only work at some Pirates Coves - and take the average, it’s one of the better putt-putt deals in town.

What Pirates Cove does well, this location especially, is verticality. Not only in the layout, but the individual holes. The greens are creatively organic, fitting the landscape like the landscape showed up first. The other Coves in town feature similar design, but this is the only location with enough tropical seclusion to distract you away from the outside world, dumpster-side wall of the Hooters out back notwithstanding.

All of the Coves have their charms. The International Drive location lets you play across a pirate ship. The 192 location offers a nice view of Disney park fireworks if you time it right. But taking into account the higher prices of the former and the occasional paid parking for the latter, there’s no better place to win yourself an eyepatch with the day’s lucky hole-in-one than the Pirates Cove at Crossroads.

Play while you can, before the long-threatened widening of I-4 finally sinks it.

Shrouded in palms and blocked by a Denny’s, this Congo River can be hard to spot if you’re not already looking for it.  Without the chain-standard zebra-stripe plane wedged into one of its waterfalls, the course draws little attention from the road. The sign helps at night, a neon explorer blazing a trail, not with a machete, but a putter.

This location's outpost doesn't have the attached gift shop or gem mining of its International Drive counterpart, but it does have a bigger arcade and its own claim to fame - a literal Congo River, complete with flamingo pedal boats on which to brave it.  The waterway winds around the front half of the course, ducking under bridges, and loops back to the entrance. It may not be a long voyage, but it's one unlike any other you can take on 192 or International Drive.

This is the only Congo location in the area that intertwines two 18-hole courses, with a slightly wider gap in difficulty than Pirates Cove. Both courses sprawl, stretching around the lagoons, through the caves and up an impressively lofty manmade mountain. It's a natural progression in difficulty that never feels constrained by layout or hurried by pace. A collection of expedition gear and artifacts, a Congo staple, hides among the mineshafts and mangroves. Spot them all and win a shot at another round. It's a tougher game of I Spy than you might expect.

There are a few deceptive straight shots, but not enough to bend your putter over. The simple-but-unsatisfying design of the International Drive location's holes is nowhere to be found. No blind bounces, impossible obstacles or detrimental tunnels here.

These courses manage to preserve the sport of miniature golf while remaining accessible for the family of six killing time until Medieval Times starts letting people in for the late show.   Junior and his waffle club will have just as much fun as professional (mini) golfers here, and that's no mean feat.  A fair challenge, if you're in the market.

There's not a Congo River logo to be found. No zebra-striped plane. No runaway truck. Barely even a sign.

But make no mistake - this used to be a Congo River, the Congo River of International Drive before the newer location was built down the block.

It'd take a weather eye and a traffic jam to spot Lost Caverns from the road. Tucked away in the shadow of Universal’s Endless Summer Resort, the course is cut off from the surrounding tourist traps by a long parking lot and near-constant construction.

The only hints to its heritage lie in hidden artifacts, sleepy gators, the suspiciously safari-themed British restaurant next door and 36 holes of quality miniature golf.

The clever design hews closer to its estranged cousin on 192, both of the same ‘90s vintage, so the challenge should be familiar to Congo veterans. On challenge alone, it's a course worth playing, but what sets Lost Caverns apart is the ambiance.

Foliage reaches lazily for the greens, overgrown by natural negligence. A sky-painted lake opens up around the back nine, ringed with the majestic monoliths of timeshares resorts. At one point, a babbling brook must be crossed by stepping on individual rocks. Maybe more so than its former comrades, Lost Caverns feels like an adventure, enlivened by the possibility of genuine peril.

What happens if your child slips into the stream and is carried out to the lake? A vacation memory that'll last a lifetime.

That's not an indictment of safety codes, but a celebration of time-earned authenticity. This is a worthwhile course for completionists and gamblers, as well as anybody looking to save a buck. Check for coupons in your tourist publication of choice.