When the first Pizza Time Theatre opened in 1977, it must have felt like the realization of a dream for Nolan Bushnell, the ATARI co-founder who hoped to revolutionize (and redeem) arcade gaming for a new era. Still, it was really thanks to marketing genius Gene Landrum that Bushnell’s dreamy concept had become a reality at all.

Pizza Time Theatre was a groundbreaking reinvention, reimagining the dirty business of arcades for a family audience. It was a safe, celebratory place for kids to eat, play, climb, and meet the memorable Chuck E. Cheese. An entirely new product – the family entertainment center – had been born.

From the very start, there’s one thing that set Pizza Time Theatre apart – yep, the theatre.

When Walt Disney World opened in 1971, among its exclusive highlights was the Modern Marvel: The Country Bear Jamboree – an all-animatronic, wisecracking, toe-tapping musical revue that delighted audiences… and became the precursor to a similarly smart band in the Pizza Time Theatre for its 1977 debut.

In its original incarnation, the band was made up of Crusty the Cat, Pasqually P. Pieplate (an Italian chef), and Chuck E. Cheese himself – at that time, a cigar-smoking, tuxedo-clad, streetwise New Jersey rat with a penchant for sexual innuendo.

Voiced by John Widelock, the gruff rat was intentionally cast to mimic the voice and mannerisms of wise-talking hooligans from ‘30s and ‘40s films, as it was expected that parents – not kids – would be the main audience of the animatronic show (given that kids would be out spending tokens to play Atari games).

Just as Bushnell had planned, Pizza Time Theatre was something the likes of which pop culture hadn't seen before... a family-friendly arcade and restaurant with its own built-in animatronic show and walkaround costumed characters, the new concept was a hit. And even if its star – Chuck E. Cheese – was a rough-around-the-edges, cigar-smoking rat that would never make the cut today, it was clear that Bushnell had a hit on his hands...

In fact, Chuck E. Cheese's invention of the "family entertainment center" was too big a hit to ignore. And as it turned out, Pizza Time Theatre’s signature starring act – its robotic dinner show – became the element competitors were eager to outstage… 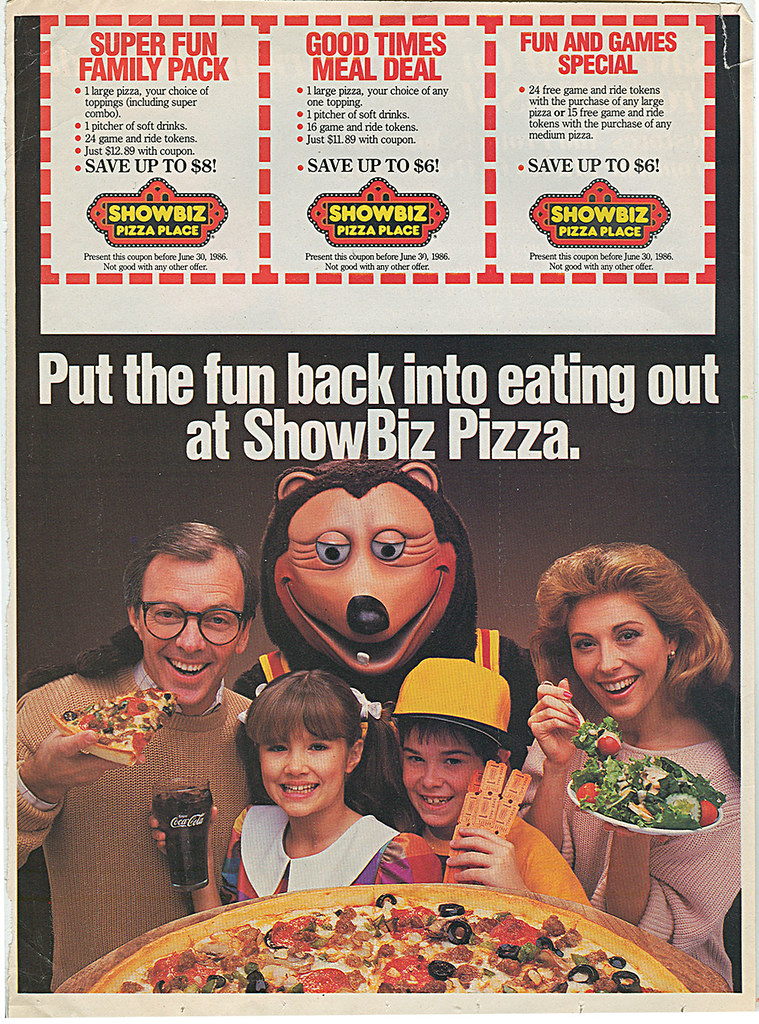 By 1980, Pizza Time Theatre (by then, owned entirely by Bushnell) had dozens of locations in multiple states. The concept of an arcade-based family entertainment center had proven itself a success. So it should be no surprise that competitors rushed to bring their own family entertainment centers to market… Chief among them was Showbiz Pizza Place, founded by Bushnell’s almost-partner Robert Brock.

Showbiz Pizza Place emulated most of Pizza Time Theatre’s features, including a cartoon star (Billy Bob the hillbilly bear) and a robotic show… but Showbiz Pizza Place used much more sophisticated animated figures designed by Brock’s Creative Engineering firm for its Rock-afire Explosion Band, seemingly besting Chuck E. Cheese at his own game (and becoming a cult classic in its own right)…

Pizza Time Theatre (that’s Chuck’s place) successfully sued Showbiz Pizza (Billy Bob’s), and was awarded a portion of all of Showbiz Pizza’s future earnings – a major win! But behind the scenes, things were shifting with Bushnell’s entertainment enterprise.

To make matters infinitely worse, both franchises were severely hurt by the “video game crash of 1983” (sometimes called Atari shock), caused by oversaturation in the market (and solved only by the introduction of the Nintendo Entertainment System in 1985, which successfully brought video games into homes, further decreasing the “uniqueness” of Chuck’s place.) 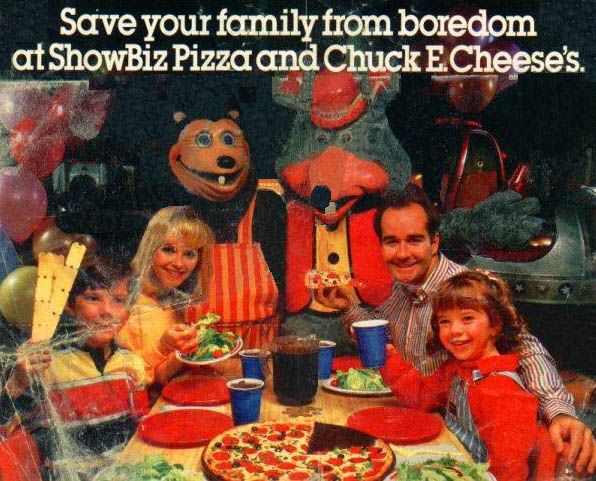 But before long, Billy Bob was furloughed. The stronger Chuck E. Cheese character won out, and in 1992, every location worldwide was renamed CHUCK E. CHEESE’S PIZZA.

In the ‘80s, a planned animated film starring the character kicked off a major redesign of Chuck E. Cheese (both voice and body), “rounding” his sharp edges and changing Chuck from a tuxedo-wearing, cigar-smoking adult rat into something more palatable for kids. In fact, any ‘90s kid will be able to identify that sporty, baseball-hat-wearing teenager of ambiguous-rodent-species voiced by Duncan Brannan (who also voiced Barney the Dinosaur from 1997 to 2000).

But for most visitors young enough to have Chuck E. Cheese as a fond memory, one of the highlights must be the ‘90s mainstay of "Munch's Make Believe Band", with Chuck E., Jasper, Helen Henny, Munch, and Pasqually in the lineup. With recurring shows throughout the day, this spectacular “live” production brought a piece of Disney Parks showmanship to your local strip mall… an unforgettable and iconic piece of “magic” in hundreds of hometowns across the country.

For ‘90s kids, the rest is history. Chuck E. Cheese’s became the go-to party place for a generation, with its robotic band, its “in pizza we trust” coin tokens, and its prize redemption center where $50 in tokens might earn you a pencil sharpener, a notebook, and a whole lot of fun.

In fact, Chuck E. Cheese’s was meant to be a respite for parents, too. The attraction’s long-standing policy of admitting adults only with an accompanying child (and hand-stamping everyone for good measure, ensuring you leave with any many children as you brought; no more and no less) was revolutionary in that it allowed parents to relax with a pizza and beer.

From a video gamers dream to a modern family attraction, the invention, growth, decline, and reinvention of Chuck E. Cheese’s is a truly spectacular tale. And believe it or not, this rodent-led restaurant inspired by Disney imagination actually turned around and became the basis for a short-lived Disney experiment itself… On the last page, we’ll see where the concept has been tested by others and finish off with Chuck E. Cheese’s modernization and future… Read on…