As Americans dusted themselves off in the wake of World War II, the 1950s gave way to an era never seen before: one where two working parents, family automobiles, and the GI Bill created something never seen before: a middle class awash with leisure time, extra income, and an interstate highway system begging to be explored.

Mid-century America was defined by families packed into sedans, heading out on the open road. And en route to National Parks or beaches, an entirely new enterprise was invented. Giant balls of twine. Alien oddities. Tourist traps. Sculpted dinosaurs eating Union soldiers... From tourist traps to genuine roadside wonders, stopping by something that sounds unusual is as baked into Americana as baseball and apple pie. And while the "gotta-see-it" trend has indeed opened its fair share of questionable and downright disappointing attractions – including some frustrating and non-AZA-accredited animal parks, perhaps like those seen in Netflix's 2020 docu-series, Tiger King – don't let it spoil roadside America for you.

After all, for seventy years, the tradition of must-see one-off attractions has only grown. Today's "roadside attractions" run the gammut from historic classics to multi-media must-sees born of the 21st century.

Today, the United States hosts innumerable sights from "world's largest" icons to spectacular attractions all theme park fans should see. We'll focus on the latter in our cross-country trip to attractions both classic and contemporary; those that inspired and those that were inspired by the parks we love. 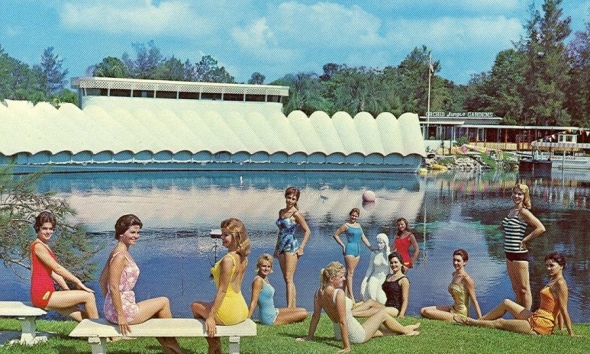 Weeki Wachee Springs is one of those ultra-classic roadside attractions dating back to the 1950s. Located about two hours west of Walt Disney World along Florida's Gulf Coast, this sensational nature park owes its status as a Florida icon to Oliver Newton Perry who laid claim to the crystal clear, bottomless, spring-fed, 100-foot wide limestone basin. While Perry could've simply operated the spring as a nature park (common throughout Florida), he instead decided to add a little pizzazz.

Perry populated this spring with "mermaids" – graceful atheletes who learned to free-dive in the basin, breathing through air-hoses and drinking a non-carbonated grape beverage underwater as onlookers gathered into an 18-seat sunken theater with a window into the underwater world.

ABC purchased the attraction in 1957 and built a 200-seat theater, using their TV leverage to push Weeki Wachee into mid-century pop culture. Today, the Springs and its mermaid shows are maintained as a State Park. We actually took a "deep dive" into this particular attraction in a standalone feature – Roadside Wonders: Weeki Wachee Springs – if you want to learn more about the place that real mermaids call home.

Quite the opposite stands Meow Wolf – a leading icon of today's "roadside attractions." Meow Wolf is an art collective and entertainment company formed in Santa Fe in 2008. While they've been the creators and curators of a number of immersive art exhibits across the region, their biggest move was in 2015 when George R. R. Martin (creator of Game of Thrones) pledged $2.7 million to renovate a vacant Santa Fe bowling alley into a permanent facility for Meow Wolf.

Opened in 2016, that facility and its permanent installation – The House of Eternal Return – took the themed entertainment world by storm. An ultra-immersive, totally-accessible, and wildly-imagined art installation, the House of Eternal Return invites guests into the home of a family who tapped into an extradimensional force known as "The Anomaly," fracturing their otherwise lovely home with portals through time and space. Guests can step through the fridge, slide through the clothes drier, crawl through the fireplace, and more.

Each portal leads to artistic landscapes from vaguely-Harajuku streetscapes to ancient caverns alight with glowing skeletons; blacklight forests to trailers overtaken by alien plant life. There are treehouses in glowing forests, neon cities, infinite rooms, mid-century laboratories, and more. This fractured, interdimensional playground is layered with stories and narratives you can explore – or not! – as you travel through trippy, otherworldly sights and sounds in an epic adventure of your own making.

Meow Wolf is opening further immersive exhibitions (Las Vegas in 2020, and Denver in 2021). In anticipation of their Denver opening, Meow Wolf oversaw the redesign of a dark ride in Denver's Elitch Gardens amusement park, creating one of our must-see attractions of 2019.

The Winchester Mystery House is one of the more peculiar sideshows you'll find for theme park fans... The home was initially built in 1884 at the bequest of Sarah Winchester whose husband William Winchester (treasurer of the Winchester Repeating Arms Company; manufacturer of Winchester rifles) died just three years earlier. At once, Sarah inherited today's equivalent of a half-a-billion-dollars from her late husband (and would continue earning the modern equivalent of $26,000 per day from the company as well).

Distraught over the unexpected death of her daughter and husband, Sarah consulted a psychic who (allegedly channeling William) instructed her to built a home to move West and to build a home for all the spirits who'd died as a result of Winchester rifles. Sarah apparently came to believe that only by continuing construction on the home would the spirits remain at peace, and it's said that construction continued "around the clock, without interruption" on the Queen Anne Style Late Victorian mansion until the day she died in 1922.

No one can say for sure if the home and truly expanding continuously, 24/7 for 38 years (though Sarah certainly had the money to fund it!), but today, the Winchester Mansion contains 160 rooms which include 47 fireplaces, 40 staircases, six kitchens, and 13 bathrooms. Curiously, Sarah's push for continuous construction yielded staircases that terminate in solid ceilings, windows built into the floors, doors that open onto multi-story drops, and other oddities – all alongside priceless stained glass, elegant ballrooms, and historic artwork. It's said that the odd, unsettling, and strange goings-on of the Winchester Mansion were a direct inspiration for the Haunted Mansion at Disneyland.

Coolest of all, the Winchester Mystery House is offering 360-degree virtual tour access for $8.99 during the COVID-19 pandemic!

For its historic appeal alone, we have to include the Mystery Spot – a good ole-fashioned tourist trap in the redwoods of Santa Cruz. To be clear, Mystery Spot falls within a category of roadside attractions called "gravity hills," with many scattered around the country. Advertised as a "gravitational anomaly," the gotta-see-it draw of the mystique alone began drawing the curious when it opened in 1940. Especially in an era before social media, the allure of "Mystery Spots" and "Things" were all it took to draw people off a highway – something today's Google-friendly culture wouldn't necessarily grasp.

This 45-minute guided tour through a "circular area of effect about 150 feet in diameter" includes some ultra-classic "anti-gravity" demonstrations and optical illusions, including a chance to visit the Mystery Shack where water appears to flow uphill and balls roll against gravity. Though it's less than $10 per person to explore, you have to enter the Mystery Spot knowing what you're getting – a charming throwback to the roadside wonders of yesteryear.

Today, the Mystery Spot is a California Historic Landmark. For theme park fans, it's worth seeing not only for its laugh-worthy illusions and picturesque setting, but for the mythos and narrative its founders were able to craft, elevating it from a troust trap to a beloved (if divisive) attraction.