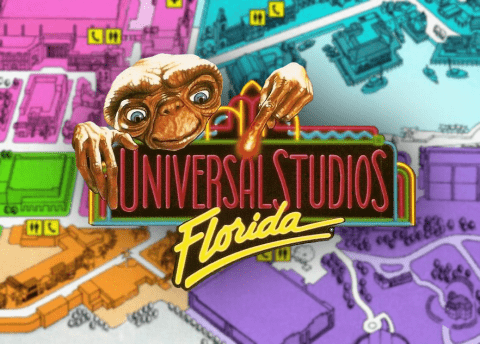 You can’t even sneak onto Walt Disney World property without seeing ten-foot-tall monuments to the most famous cartoon characters in human history. There’s a reason the statue with Walt and Mickey is called “Partners.” Mickey Mouse, Minnie Mouse, Donald Duck, Goofy, and Pluto - the so-called Big Five - are as indistinguishable from the Disney experience as the color red from Coca-Cola.

Universal Orlando Resort, on the other hand, has never had a lasting mascot. E.T. graced t-shirts the longest, but now mostly keeps to himself as the park’s elder statesman. Hanna-Barbera characters gave way to Nickelodeon characters, which gave way to Illumination characters, give or take a few sea sponges. Woody Woodpecker endures as Universal’s dark horse, an 80-year-old cartoon that started as a walkaround character, earned his own land, provided a cuddly ambassador to the new park next door, and thrives on merchandise to this day despite a limited presence in modern American media. Then you have the current billboard class - Spider-Man, Minions, Shrek, The Simpsons, a dinosaur, the boy wizard whose name escapes me. Even if they don’t stand guard on Kirkman Road, you’ve certainly felt their presence or at least seen them on the walls of the airport stores.

But those billboards could’ve easily been occupied by other familiar faces over the years. Here are six contenders:

If you vaguely remember Casper haunting the Studios, you’re vaguely correct. In the summer of 1995, sets from the same year’s effects-heavy hit took up residence in Soundstage 22. Guests could tour the spooky halls of Whipstaff Manor and commemorate their visit with the usual souvenir suspects. T-shirts with Casper’s translucent face peeking over the old neon Studios logo haunt Ebay to this day. Casper: On Location even earned airtime in contemporary commercials, promising a “behind-the-screams look” at the sixth-highest grossing film of 1995.

Despite beating Mortal Kombat, Bad Boys, and a James Bond at the box office, Casper all but vanished from the cultural consciousness in the years to come. Not that Universal let the iron cool on accident. A Casper attraction was on the drawing board, however briefly. It would’ve allowed guests to steer flying beds with attached candelabras. Not much is known about what could’ve been, but given an entirely different Casper dark ride appearing prominently in the Goddard Group’s 1996 concept art for a Universal Studios park in Germany, it’s clear the company was seriously considering a ghostly promotion.

In a kinder, gentler timeline, there would be no monthly thinkpieces about what Disney buying Marvel means for Islands of Adventure because Universal would’ve landed their first choice, DC Comics.

In the early 1990s, when their hypothetical second gate was known only as Project X, Universal wanted cartoons that could go toe-to-merchandising-toe with the competition down I-4.  With the 1992 release of Batman Returns, the Caped Crusader continued his reign as the only superhero with a white-hot presence off the page. That presence, however, is exactly what tanked the deal.

The Landmark Entertainment Group sketched out elaborate plans for a Burton-inspired Gotham, complete with dueling suspended coasters, and a sunnier Metropolis, headlined by a simulator hybrid that would become The Amazing Adventures of Spider-Man. DC was onboard, but Time Warner, who owned the film rights to the superheroes involved, wasn’t so keen on sharing custody with another studio. Time Warner wanted 8% of royalties from the new park. MCA, then-owner of Universal, wouldn’t go higher than 6%. Time Warner walked, taking another stable of beloved characters with them in the bargain.

Bugs Bunny may be to Six Flags what Mickey Mouse is to Disney parks, but he was very nearly an Islands of Adventure star. The Looney Tunes characters, no slouch alongside the Mouse on the iconography charts, showed up in the earliest plans for Project X, when it was still unofficially dubbed “Cartoon World.” The scarce surviving concept art for the Looney land includes attractions centered on Wile E. Coyote, Marvin the Martian, Yosemite Sam, and more.

The Looney Tunes fell through in the same negotiations with Time Warner and took the possibility of “Cartoon World” with them. Though Marvel was a convenient substitution for DC, the additions of Jurassic Park and the Lost Continent turned a 2-D world into Islands of Adventure.

WOW, how have I never heard about the idea of a ride based on the works of Stephen King? It's such an obvious winner, would love to see concept art for it!

The stage coach from Van Helsing is back stage in the lay down yard covered by tarps.