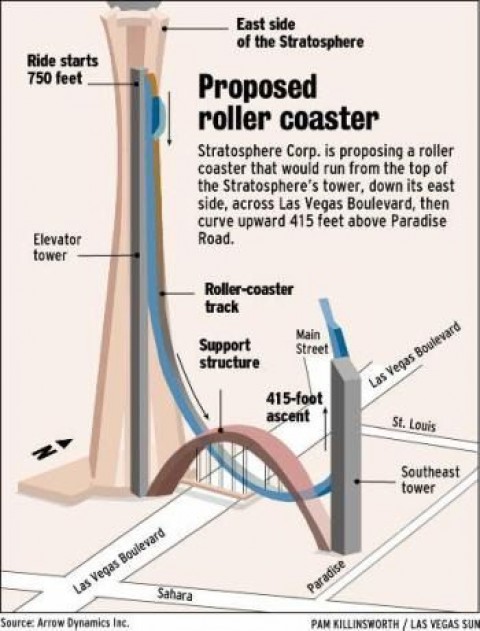 At the turn of the millennium, the amusement and thrill world was deep in the midst of what is now known as the Coaster Wars. Every park was pushing for greatness, for something new. The two biggest contenders in the war, perhaps, were Cedar Point and Six Flags Magic Mountain. Not only were the parks competing in quantity, each vying for the title of most coasters in one park, but they were also focused on quality.

Since Cedar Point’s debut of Magnum XL-200 in 1989, it seemed that every new coaster had to be a record breaker. Park executives and coasters manufacturers were constantly pushing for faster, longer, taller, wilder. In 2000, Millennium Force had just opened at Cedar Point, marking the world’s first full-circuit Giga-Coaster. Superman the Escape at Six Flags Magic Mountain, meanwhile, broke 415 feet, living a short-lived life as the world’s tallest coaster before (you guessed it) Cedar Point dethroned it in 2003.

While the parks had their rivalries, however, the public benefited from the wars through the introduction of new groundbreaking attractions that still stand today. Kinda-Ka premiered in 2005 as the world’s tallest coaster, standing at roughly 450 feet, a record still unbroken fifteen years later.

There was a coaster, however, that would have broken—not broken, shattered—this height record. In the year 2000, the iconic Stratosphere hotel was looking for a new addition, something the world had never even thought of, let alone had the chance to experience. The coaster was not 450 feet or 500 feet or 600 feet. The proposed coaster stood at 700 feet. However, met with angry residents and a company on the brink of bankruptcy, the giant coaster would never come to be.

The Stratosphere in Las Vegas, Nevada, features an array of click-bait attractions such as X-Scream, a teeter totter-type ride that dangles you off the edge of the building at roughly 850 feet, and Big Shot, a standard drop tower stationed at the very top of the structure. Big Shot opened with the landmark in 1996 along with High Roller, a coaster with thrills that would normally be considered a kiddy coaster if it wasn’t positioned at the top of a skyscraper. The growing thrill destination, however, was in search of something far more eye-catching and tourist-trapping. In 2000, smack-dab in the middle of the Coaster Wars, what could be better than absolutely obliterating the record for the world’s tallest coaster?

The proposed coaster, referred to as the “Fish Hook” coaster, stood at 750 feet. Riders would be lifted to the highest point of the coaster before plummeting down the side of the Stratosphere. The coaster would top off at 120 miles per hour (another world record for the time) and speed over Las Vegas Boulevard before ascending a beyond-vertical spike which would slow down trains from the high speeds they reached on the descent. The spike alone would stand as tall as the height record holder at the time, Superman the Escape at Six Flags Magic Mountain.

This large drop paired with a beyond vertical spike gave the coaster its fish hook shape, and would undoubtedly be an icon had it seen the light of day. Though manufacturers such as Intamin and Bolliger and Mabillard were sweeping the scene in innovation, the Stratosphere would consult classic American manufacturer Arrow Development to take on this challenge.

Arrow Development was founded in 1945 by Angus Anderson, Ed Morgan, William Hardiman, and Karl Bacon. Though the company would dissolve for good in the 2000s, it would not be without making a tremendous impact on innovation in roller coasters and theme parks alike. Starting with a modest carousel in San Jose, Arrow would soon be approached by a man by the name of Walt Disney.

Arrow would not hold the legacy it has today if it were not for Disney, but the same goes for Disney. Arrow was instrumental in developing Disneyland and Disney World into the theme park tent poles they are today. Working with Disney, Arrow was the first manufacturer to develop the tubular steel track which is still found on the majority of modern steel coasters today. This innovation allowed for new maneuvers and track profiling the industry had never seen before. Their mine trains are found in countless parks across the world, most of which still operating today, and their tubular track made way for the first modern looping coaster, Corkscrew at Knott’s Berry Farms.

Arrow’s innovation in steel coasters made way for the creation of iconic attractions such as Magnum XL-200 at Cedar Point, the Big One at Blackpool Pleasure Beach, Loch Ness Monster at Busch Gardens Williamsburg, the Bat at King’s Island, and countless more. Arrow was constantly pushing the limits of what was possible in the amusement industry. Not only are their rides iconic, but many modern manufacturers have Arrow to thank for their influence and foundation. Though they filed for bankruptcy in 2001 due to reasons which will be explored, Arrow cleared the path for many to come, and for that their legacy is forever solidified in parks and hearts around the world. When you ride an Arrow coaster, your truly ride a piece of history.