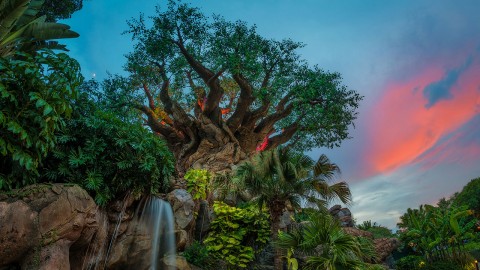 Since 1970 – fueled by the Clean Water Act and the movement toward environmental education – April 22 has been celebrated as Earth Day: a borderless celebration of the power of environmental protection and our one planet. But for Imagineering fans, there's perhaps been no bigger celebration of this international holiday than the opening of Disney's Animal Kingdom in 1998.

Considered a masterwork of Imagineering, this magnum opus of themed entertainment design was made possible by a team of dedicated researchers, designers, engineers, animal care experts, and scientists often exemplified by the park's lead designer (and the Lost Legend: The Adventurers Club), Joe Rohde. A scholar, a philosopher, an artist, and a true-life adventurer (literally serving as the inspiration for several members of S.E.A.), Rohde is an icon of modern Imagineering... and he's letting us in on his thought process.

Thanks to the worldwide closure of Disney Parks due to the COVID-19 pandemic, Disney's Animal Kingdom isn't open to guests for its 22nd anniversary – April 22, 2020. But thankfully, Joe Rohde has been leading us on a roundtrip tour of the park via his personal Instagram, sharing his own photographs from inside.

Here, we've collected a handful of the sensational lessons we've learned from this makeshift social media tour, and we're sharing them here with the hope that – like us – you won't see Animal Kingdom the same next time you step inside. Note that here and there, we've edited Rohde's original comments for clarity or brevity, but we'll link to his original for every lesson we've learned. We didn't think it was possible to appreciate Walt Disney World's fourth gate more, but wow... Do these comments make you see Animal Kingdom differently?

When you're designing an icon that has to hold its own against Cinderella Castle, Spaceship Earth, and the Hollywood Tower Hotel, you have to bring your A-game. The "Tree of Life" is the term used for a 19th century diagram depicting shared ancestories and the variations and adaptations of life on Earth through species. But in 1998, it also become the undisputed icon of Disney's Animal Kingdom. The 145-foot tall sculpture of a baobob tree is actually built around the refitted base of an oil platform, boasting 8,000 branches and 102,000 leaves. But how did the Tree of Life come about conceptually?

What we learned from Rohde: "Because the park is dedicated to the themes of animals and their relationships to humans (good and bad), we needed a non-architectural icon... something “natural.” Since nature is everywhere anyway, we also need to signify that this place is exceptional... in some way “magical.” Thus... a strange tree. A tree whose body disappears under patient observation to become nothing but animals. A metaphor for the rewards nature can provide to the careful observer."

Radiating outward from the Tree of Life are some of the first animal exhibits guests encounter in the park. These naturalistic habitats are carved out from the roots and tendrills of the tree. Unlike the park's Asia and Africa areas, whose animal inhabitants are dictacted by geography, there's seemingly no thread that connects the animals housed in the Discovery Island habitats. Unsurprisingly with Joe at the helm, though, there is a connection between the Discovery Island animals.

What we learned from Rohde: "When we originally chose animals just around the tree, we chose them for their physical diversity, as demonstrations of the vast differences in shape as animals adapt to their various ecosystems. Kangaroos, porcupines, flamingos, macaws. Each of these animals has strikingly unique adaptations. A marsupial deer with the body of a giant hare. A rodent with really pokey hair. A bird with an upside down mouth. A giant parrot with nutcracker jaws. Something is at work here. A principal of life.

These are observations which can be made but are not required. Because this is not an educational facility per se, we want people to pursue ideas at their own pace."

Surrounding the Tree of Life is the park's central land, Discovery Island (originally named Safari Village until enough folks who couldn't find Kilimanjaro Safaris prompted a rewrite). Unlike Africa, Asia, Dinoland, and even Pandora, Discovery Island doesn't need to represent a real place. Instead, it's "a place that represents an idea;" a neutral port from which to depart to the park's more grounded lands.

What we learned from Rohde: "Discovery Island "is basically an architectural revisitation of the same themes expressed by the Tree of Life in its center. The beauty, diversity, the importance of animals, only this time instead of being expressed as a natural object, the same idea is expressed as art on the surface of buildings and around them. The buildings are not from any particular region but are reminiscent of tropical architecture around the world. I know a lot of people spend time looking at the animals on the tree… But I bet far fewer people take the time to look for all the animals on the buildings, both inside and outside.

And if you pay close attention, there are these very subtle groupings to the design. Animals who migrate. Animals who eat each other. Animals who disguise themselves. The murals inside Pizzafari have pretty obvious underlying themes. In this case, rather than tell you exactly what, I think would be interesting, when the park reopens, to go check and see if you can figure out what the groupings might be."

Continuing the artisan depiction of relationships throughout Discovery Island, the spectacular Flame Tree Barbecue is packed and two- and three-dimensional depictions of predator-prey relaltionships – a pretty funny thing to surround you while you eat barbecue, when you really think about it... Yet somehow, the Flame Tree Barbecue area is restful and relaxing. It turns out that the area doesn't look at all the way that was initially planned, even if in true Imagineering form, the final product is all the more spectacular because of it...

What we learned from Rohde: "Early in design of the park there was a shuffle of programming. The Tree originally had a restaurant under it with a view of the river. The Flame Tree location was an amphitheater. We decided to put a bigger show under the Tree so we abandoned the amphitheater and moved the restaurant to the amphitheater location.

Because this happened after our landscape design was pretty well defined, we had to fit the restaurant into the amphitheater shape. That could have been a design problem, but it ended up creating a really wonderful space. It’s loosely inspired by some of the places we visited in Bali...little pavilions surrounding a reflecting pond." ... "The architectural ornamentation is inspired by colorful folk art mainly Oaxacan carvings, Peruvian Moche ceramics, and American folk art carvings...not Balinese at all."

Discovery Island and the Tree of Life together act almost like a "Hub" for the park, with the "spokes" radiating outward into the Oasis, Pandora, Africa, Asia, and Dinoland. Because of the encircling Discovery River that flows around the Tree, any journey forward meaning crossing a bridge (a narrative tool used in Universal's Islands of Adventure as well), instantaneously "flashing" guests between continents, planets, and worlds. As you can imagine, that's no accident.

What learned from Rohde: "Crossing a bridge is one of the time honored narrative symbols of change. It is such a common metaphor that it has passed into normal language... we talk about bridging between subjects, music bridges, etc. So it’s not just for functionality that bridges separate us from the four main narrative lands of the park. It’s symbolic, like a gate or tunnel. The river itself may change over time and has already, but I think the bridge motif is likely to remain."

Harkening back to the park's opening motto, Animal Kingdom spent much of its early life convincing guests that it is "Nahtazū." And despite its focus on live animals and its practice of arranging its animal collection by continent (a favorite organizing principle of zoos), it's easy to see what makes Disney's park different. It's not just the hyper-detailed environments built by true artisans after extensive research and consultation, or the rides and attractions... it's the context; the story; the deeper themes of the inherent value of nature of humanity's relationship alongside and within it. Turns out, there are threads connecting animals within each of the park's lands.

What we learned from Rohde: "If you pay attention to most of Disney’s Animal Kingdom You’ll see that when you come up on animals, it is usually in the context of some story. In Africa that story ultimately reflects upon the question of resources, like ivory and rhino horn. Asia is chiefly concerned with habitat loss and habitat use and how animals and humans can live side-by-side; in Pandora, with pollution."

7. Fiction, but not fantasy

What we learned from Rohde: "People who know the park will comment on its “authenticity. “This word makes me a bit uncomfortable, since the entire thing is fictional. I think accuracy and realism are more apt terms. The stories that we tell are pseudo-documentary. They relate to real ideas, but are artificially constructed. We want you to understand that you are inside of a story, just like at the Magic Kingdom, but you are not inside a fantasy.

Crossing the literal and metaphorical bridge from Discovery Island to Africa begins a change in the park's design and the emergence of something vastly different from Discovery Island: realism. Its lands are real and habitable, packed with nuance and detail. But even though they may look like postcards of real places, they're still fictional; passed through a lens of fantasy. And even here in this photorealistic imaginary place, we – the visitors – have a role to play.

What we learned from Rohde: "None of our lands are supposed to be geopolitically real like say, Kenya. Harambe looks a lot like Lamu in Kenya, but not in a replicative way, and there are substantial stylistic departures. It’s more like a smash-up of Lamu-Kenya and Arusha-Tanzania. Both are a kind of mercantile border town, as is Harambe.

The word Harambe means “let’s work together or pull together.” Implicitly on behalf of wildlife. What can we read in this environment? Clearly multiple levels of history and conquest, as with Lamu. There’s a Portuguese fort, some remnants of Omani reign, a British Colonial era, and Independence in 1961. Must be a valuable place. The building are old and weathered, but not intended to look neglected, and there’s lots of evidence of reutilization and upcycling...from economic stress? So people are striving here. I mean, the municipal logo is a Maasai shield and an industrial gear with the word ”enterprise.”