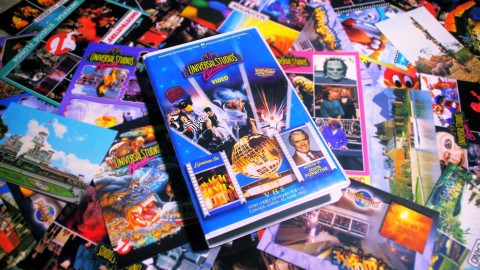 The Partners statue of Walt Disney and Mickey Mouse has its own comprehensive Wikipedia page. Most people assume the statue of Universal Studio Florida’s founder is Abraham Lincoln. That’s not an entirely fair comparison - you won’t find the name of MCA/Universal chair Lew Wasserman on any exits down I-4 - but it is indicative of a lasting culture clash between the Orlando theme park heavyweights. For the Magic Kingdom’s 25h anniversary, Disney smeared Cinderella Castle with 400 gallons of Pepto-pink icing and made it the world’s biggest birthday cake. This year marks Universal Orlando Resort’s 30th anniversary. Unless they’re planning to put out a t-shirt later this year, it’ll likely go uncelebrated.

History is practically a buy-in for Disney Parks fandom. Right now on the ShopDisney website, a crew neck t-shirt with the logo of an ill-fated nightclub district that closed twelve years ago can be yours for only $25. Entire books have been written on Disney attractions that never made it off the drawing board. But, to paraphrase the competition’s current billboards, history is not Universal.

That makes Universal Studios Florida: Experience The Magic Of Movies the most valuable primary source on the subject by default, if not entirely by design. Everyone nodding along likely has fond memories of it, the first souvenir VHS tape Universal Studios Florida ever sold. There’s very little reason, though, that even the most devout rewinders would’ve bought more than one copy over the seven-or-so years it took up shelf space in the park. What seems to be one warmly remembered video is actually three significantly different cuts, with slight revisions for intermediate releases, further confused by two different copyright dates. The three major versions tell a story of a failing studio and burgeoning theme park, but even then, the history is mostly in the margins.

If you’re following along at home, the quickest way to tell what cut you’re watching is by the earliest title shown. Uploads vary - the 1994 and 1996 versions both use the middle logo and might include a green production card - but this should put you on the right track:

The first edition of Experience The Magic Of Movies hit gift shops in 1991, Universal Studios Florida’s make-or-break sophomore year. Guests were still routinely cashing in their rain checks from the disastrous inaugural summer. The lede of the Orlando Sentinel’s opening day coverage says it all: “Jaws didn’t bite and Kong was anything but king...” Later on in the same article, a Texan visitor assured reporters she would be telling her entire home state not to go. Universal’s optimistic attendance forecast called for six million paying customers in the first year. They cleared less than half that.

The solution was $50 million split unevenly between fresh, mostly fool-proof live entertainment and Back to the Future: The Ride. Like A Dream Called Walt Disney World before it, Universal’s first souvenir video had an ulterior motive. Come, ride the movies, then take home the tape to impress your friends. No matter what the gossip was in Texas, Universal Studios Florida was new, improved, and open for business.

In the first thirty seconds, a cowboy ziplines out of an exploding shack, King Kong knocks two soldiers off a burning train, and Beetlejuice makes a sleazy entrance. TV legend John Forsythe calls cut and sets a proud tone: “You have not seen anything yet.” Given the park’s notorious reliability at the time, he probably wasn’t wrong. Which explains why this video, no matter what cut you’re watching, gives away so much of every attraction it covers. Each demonstration of Alfred Hitchcock: The Art of Making Movies gets its due, with preshow interviews with his biggest stars cut in as needed. Every big bang from the Dynamite Nights Stunt Spectacular is present and accounted for. Even the Screen Test Home Adventure, a $30 upcharge to experience the magic of green screen technology and replace William Shatner in Star Trek, earns a minute in the spotlight.

In its loud and proud youth, Universal Studios Florida knew blessedly little restraint. But of all the cuts, the original spends the most time away from pyrotechnics and great apes. Only six minutes in, John Forsythe provides a breezy history of film as a medium, from Edison’s kinetoscopes to the rise of nickelodeons. He also recounts the legendary, if possibly apocryphal story of how studio founder Carl Laemmle settled on the name when a truck marked “Universal Pipe Fittings” drove by. The story of the movies was worth mentioning in 1991 because Universal Studios Florida was supposed to be the next chapter. Before the 1994 cut, in a revision that dropped Screen Test, added the long-awaited Jaws 2.0, and retained a 1991 copyright, that history was already gone.

With that first, invisible edit, the videos become their own messy resource of Universal Studios Florida’s history. Some things remain constant. All the versions have rapturous footage of the park’s opening day, shot in the hours the shark stopped working and Kong had to be moved by hand. John Forsythe narrates all of them, though his material around the park was shot sometime in late 1990, when Finnegan’s was still made up as Mindy’s for John Landis’s Oscar. The b-roll never changes either, but that’s where the discrepancies start.