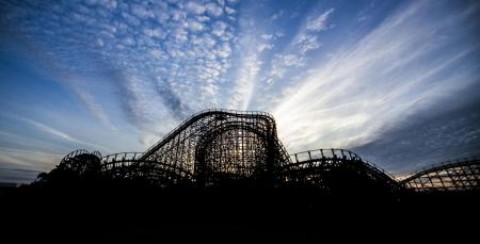 Something was roaring in Tampa in the summer of 1999. It was named after a mythical creature with the head of a tiger and the body of a lion. 7,000 feet of track peeked up from the skyline. It stood at 100 feet tall and hauled at speeds of over 50 miles per hour…and there were two of them.

Gwazi debuted at Busch Gardens Tampa dubbed as the Southeast’s largest wooden coaster. Manufactured by American company Great Coasters International and coming in at a price tag of 10 million USD, Gwazi was a much-needed addition to the Florida area. Though Disney World and the rapidly expanding Universal Orlando Resort had already cemented Florida as a hotspot for roller coasters and thrills, the area was lacking in the wooden coaster department. The only other wooden coaster in Florida had closed nine years prior, so for many young enthusiasts and park goers, Gwazi was their first experience on a wooden coaster. The thing is, this wasn’t a starter coaster you’d find at a family fair or beach boardwalk. This was a lateral-packed airtime machine with a dueling element that riders had seldom seen upon its opening. With six self-proclaimed “flyby” moments, the riders would experience the illusion that they were about to run into the train on the opposing track. If paced just right, it seemed that you could give riders a high-five. (Spoiler alert: you couldn’t. Dueling coasters are designed with specific clearances and a safety first mentality, making contact between riders nearly impossible.) This coaster was nothing short of intense, but with a 48-inch height requirement, even younger children could catch a ride on the Lion or Tiger side.

Though the sides offered slightly distinct ride experiences, the differences were minor. Both featured the now-iconic twisted drop, each banking to a different direction. You couldn’t go wrong—both sides offered out-of-your-seat airtime, laterals that would throw you to either side, and speed that would convince you the coaster exceeded its 50 mph limit.

Gwazi was something new, something fresh on the scene. While most wooden coasters at the time offered a linear out-and-back layout, Gwazi’s twisted dueling layout was a sight to behold. Even the bird’s-eye view of the coaster is breathtaking, with airtime hills and banked turns converting a roller coaster to a work of art, beautiful and awe-inspiring.

But the visual beauty and twisted layout came with a cost.

The Headache of Gwazi

Despite initially positive reviews upon opening, Gwazi would only operate at Busch Gardens Tampa for fifteen years. Some would argue, however, that it only ran well for closer to five years. The attraction had built up a reputation of charm, sure, but with that charm came a rough ride. The trains, manufactured by Philadelphia Toboggan Coasters, just didn’t hug the track like they used to. The ride had an intense rattle to it, making it both a headache for maintenance and, well, a headache for riders. Many wooden coasters have some roughness to them—that’s part of the allure—but Gwazi quickly became painful. In 2006, a 52 year-old man died of a heart attack just hours after riding the wooden coaster. Though it was determined that the man had pre-existing heart conditions, the tragic incident did deter riders for years to come.

The park proceeded with a three-year improvement plan. In 2009, ten years after the ride’s debut, the Lion side was re-tracked. This is when teams go in and replace either sections or the whole track in order to ensure proper profiling and a smooth ride. In 2010, the Tiger side followed suit in a re-tracking. Then, in 2011, the shaky Philadelphia Toboggan Company trains were replaced with Millennium Flyer trains, manufactured by Great Coasters International themselves. These trains, found today on rides such as Ghostrider at Knott’s Berry Farms, were specifically designed to traverse the tight and whippy layouts of Great Coasters International’s wooden coasters. It was hopeful: a trinity of development and improvements. But it would not prove to be enough.

Just a year later, the Tiger side of Gwazi closed. Ridership was low, maintenance was showing to be more trouble than it was worth, and the reputation of pain and discomfort had been sealed in the minds of park goers. By 2015, the historic coaster gave its last ride.