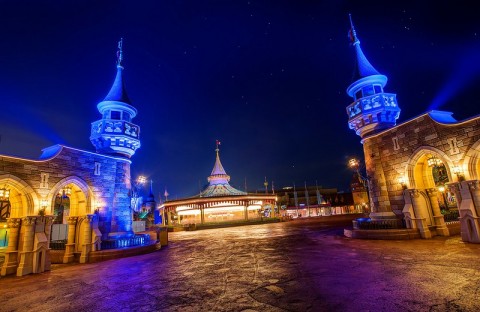 At the time, it seemed like the biggest news in the world. Now, just a little over a month later, it’s almost easy to forget. But, it’s true: Bob Iger isn’t the CEO of The Walt Disney Company anymore.

When Bob Chapek took the reins of one of the world’s largest entertainment companies, he probably didn’t know what he was getting into. At that point, Disney’s stock was soaring, its parks just opened crown jewels with Star Wars: Galaxy’s Edge, and the future seemed as bright as ever. Sure, passionate Disney Parks fans grumbled about Chapek’s management of the theme parks over the years, but for the majority of Disney Watchers, all Chapek would need to do is continue on autopilot for a few years while he found his footing.

Now, all of that is out the window.

Regardless of the economic picture, Bob Chapek would have to face quite a few challenges with regard to his theme park portfolio in the coming years. But, suddenly, he finds those questions being posed with even more immediacy. Here are four challenges Bob Chapek will have to confront as the new head of The Walt Disney Company, specifically with regard to the theme parks.

As of this writing, the world is in a state of chaos. The global economy has fluctuated wildly throughout March of 2020. Many countries are in a state of indefinite lockdown. Millions are without jobs, and hundreds of thousands have fallen ill to coronavirus. The Disney Parks are, in fact, closed for the foreseeable future. They may not reopen before summer, or Halloween, or even New Years. Much is uncertain, and no one has the answers because they are largely unknowable.

Disney is a big enough company, and its Disney+ platform has been a large enough success, that it doesn’t face an existential threat from coronavirus-related economic catastrophe. At some point, for Disney, this will all be over and it can resume business as usual.

But, what form “business as usual” will take is another matter entirely, and it will be up to Bob Chapek to make that decision.

For years, Disney has been moving in the direction of being a theme park for the wealthy, offering incredible, immersive, luxury experiences for an ever-increasing cost. Much like Apple charges more for what is, essentially, a hyped-up version of a Windows PC, Disney is charging a premium for what it considers to be a step above its competition. Will this be the strategy Chapek continues to utilize once COVID-19 settles down? When consumers choose to spend their money again, will Disney change its plans to attempt to appeal to more people? Or will it double down on the “lower capacity, higher ticket cost” plan it’s been following?

It’s impossible to say right now. After 9/11, Disney lured guests back to Orlando with deep discounts and lucrative promotions. It’s possible they’ll trot those deals out again, but it’s also possible they’ll use this chaos as an opportunity to once-and-for-all change to be a high-cost, exclusive product.

The Integration of Fox IP into the Parks

Another piece of massive news that you might have forgotten is that Disney recently acquired nearly all holdings of 20th Century Fox, including, most notably, its film library. Fox’s highest-grossing film of all-time actually already has a pretty hefty presence in the Disney Parks: Avatar. But, it remains an open question as to what extent Disney will leverage existing IP that it now has access to in its physical locations.

The list of Fox IPs that Disney acquired is actually rather curious, and it makes it hard to predict just how Disney might use those projects in its theme parks. For example, the most popular animated film series Fox created was the Ice Age franchise, with five films in total to date – the last of which underperformed at the box office. Visually, the films don’t quite have the same punch as Disney’s best, and with the original debuting in 2002, it’s hardly a hot-off-the-presses guarantee. On the surface, it seems like an easy fit. When you dig into it, though, it’s hard to figure out just who the audience would be.

Most of the successful Fox projects are either Marvel movies (Deadpool, X-Men), Star Wars movies that Fox distributed, or adult in themes (Titanic, Futurama, The X-Files). Of course, there is one possibility: Disney could use one of Fox’s most visible properties, The Simpsons, as a negotiating chip to try and get rights to the Marvel characters back in Florida. But, that’s a conspiracy theory for another day.

In all likelihood, Fox’s IP will serve as creative fodder for the company to continue rebooting nostalgic films and series that people enjoy. For example, an X-Files reboot on FX or a Die Hard reboot in cinemas around Christmas of 2025. As for the parks, it seems unlikely, but it also seems unlikely Chapek would allow such a massive deal to bear no fruit for the heart of Disney’s company. Stay tuned.