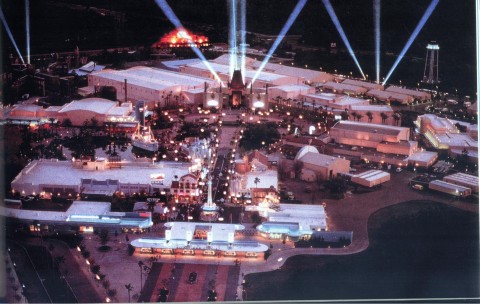 As Doris Day famously hipped, Hooray for Hollywood. She meant the one in California, but there’s a single lyric that sounded like accidental foreshadowing some fifty years later: “Go out and try your luck, you might be Donald Duck.” At the televised grand opening of the Disney-MGM Studios, they even let Donald squawk that verse personally.

In the late 1980s, Disney and Universal spent a combined $1 billion on production facilities and infrastructure to turn Orlando into Hollywood East. Then-mayor Bill Frederick bragged that they’d have to call Hollywood “Orlando West” before long. Naysayers guessed it might become Toronto South, given the state allowed for cheaper non-union crews.

They’d all be wrong in under a decade. So much for trying their luck.

What happened? That’s an case study for another day, but it’s not hard to see the disadvantages.

Hollywood, that is the Hollywood, ended up where it is because any location you wanted was only an hour away. Deserts. Beaches. Mountains. Forests. Every size and shape of municipality. Drive four hours in any direction from Central Florida and you’ve got...more Florida, give or take some mangroves. In Hollywood, most stars were only a taxi away. It cost money and time to fly a full cast and crew across the country. Most productions that tried the new facilities didn’t count on the complete It’s A Small World experience, with built-in hallways so tourists could watch their favorite actors botch take seven.

There was a fundamental culture shock between the town where Mickey Mouse rubbed elbows and the town he put on the map. Former Disneyland magician Steve Martin laid it out to the Los Angeles Times after shooting Parenthood around Orlando in 1989:

“Because it’s a tourist town, people are used to having access to everything. It’s not like New York or LA. There’s no etiquette. And you’re expected to be friendly all the time.”

By 2000, despite offers from Disney to add private soundstages across the highway, Orlando hadn’t become Hollywood East or Toronto South. It was just the theme park capital of the world.

Today, the two parks that were supposed to lead the charge bear only passing resemblance to their grand openings. Universal Studios Florida still has its street sets and soundstages - the Deal or No Deal revival was recently shot there - but they get more mileage out of them for Halloween Horror Nights than outside production. Disney-MGM Studios no longer exists, in name or concept. Disney’s Hollywood Studios replaced its streets with Star Wars and soundstages with Toy Story, and the smart money says the remaining infrastructure of Animation Courtyard isn’t long for this world either.

If you know where to look, though, the dream of Hollywood East is still alive in Central Florida. This isn’t by any means a comprehensive list, but here are a few places to start.

Hidden in the jungle to the right of the Indiana Jones Epic Stunt Spectacular but before the big robot dog, you’ll find the gently rusting Studios Shops. This is where every prop, set, and piece of cinematic forgery in the Studios was made and now haphazardly stored. At least that’s how the story goes. It’s always been a quick service restaurant that just so happens to be furnished with everything you need to make a movie.

Once upon a time, the Backlot Express featured pieces of film history just as accessible as the toppings bar. The Toon Patrol paddywagon from Who Framed Roger Rabbit used to sit outside by the Paint Department. The mechanical contraption, like a deconstructed go-kart, that Bob Hoskins rode around in underneath the animation for Benny the Cab was a photo-op for anyone in the know.

Last summer most of the touchable props were removed to make room for the inevitable Galaxy’s Edge crowds. But all is not lost. Go eat, drink, and be curious. Keep an eye out for matte paintings in progress on the walls and props that clearly said Disney-MGM Studios not so long ago. Peek into the fully furnished Paint Department office. Peek at the hovercraft mold from Epcot’s dearly departed Horizons over the Stunt Department office. Bonus points if you can find the Six Flags brochure on the bulletin boards.

It’s a testament to Universal Studios Florida’s versatile construction that this corner of its New York sets is named after a movie set in Chicago that was mostly shot on a Hollywood backlot.

Your average parkgoer won’t even notice it, even as they wait for their latte right around the corner. Hidden in plain sight between Starbucks and the corner where the Blues Brothers perform, Sting Alley looks like a dead-end. A collection of lovingly aged storefronts and fire escapes on the verge of collapse. Venture into that red brick unknown and it eventually connects to the waterfront.

In between is a refreshing piece of otherwise pointless design. There’s no store, no arcade, not even an ATM. It was built for production, with quarters that seem a little too tight for theme park crowds, and not much else. Sting Alley has showed up in commercials, music videos, and at least one episode of the ‘90s Swamp Thing. The Universal faithful know it best as an early staple of Halloween Horror Nights, later immortalized in a 2002 ad for the event and the pre-show video for 2009’s beloved Leave It To Cleaver house.

These days, even in the peak season, Sting Alley is quiet if not empty. So wait for your coffee, then go sit on an artificially dirtied stoop and enjoy the fake view.

Now we get into the nitty-gritty leftovers. The kind of trivia that will make your friends pause momentarily and go, “Nice,” on their next vacation.

As mentioned previously, one of the last largely untouched corners of Disney’s Hollywood Studios is the Animation Courtyard, even if the actual animation stopped in 2004. The occupants have obviously changed, though, making the majestic studio arches a little less obvious than they used to be.

When the park first opened in 1989, the only way for a guest to see New York Street or any of the soundstages was the Backstage Studio Tour. This two-hour monster, later split into separate tram and walking tours, loaded from what is now the open-air queue for Star Wars Launch Bay. Trams took guests to the back of the lot, then dropped them off for a long walk through the stages, culminating with a short called “Michael & Mickey” in The Walt Disney Theater.  So in the early days, the Disney-MGM arches physically separated the theme park from the active studio.

But as production dwindled and attendance exploded, guests needed more to do than peek into empty soundstages. A new show, Here Come The Muppets, was fast-tracked into the original Walt Disney Theater and a smaller replacement theater was built onto the back of Soundstage 4, then the post-production facility. Before long, the walking tour shrunk again, no longer needing a theater at all.