Fixing FastPass: How Disney’s Virtual Queue Was Born, Broken, And Could Work Again 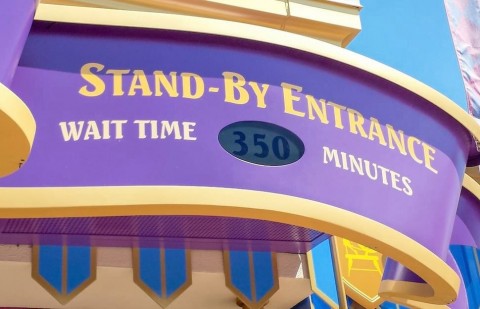 If you haven’t opened the My Disney Experience app lately, check it out and you might be shocked... No, not just by rising food prices, sold-out Boarding Groups, or slashed park hours but by something much simpler; something we thought we had long-ago gotten under control: wait times.

In what we once called the “off season” – weekdays far removed from Christmas break, Spring break, and any major holiday overlays – it’s not unusual to see the waits crest an hour for Magic Kingdom’s “mountains,” Buzz Lightyear’s Space Ranger Spin, Pirates of the Caribbean, even the Jungle Cruise. Is it in our heads? Does it merely feel like we're waiting longer for the same rides?

Thanks to the indispensible work of the data scientists and vacation planners at Touring Plans, we can break down this frustrating phenonenon by the numbers...

It probably looks how you "remember" a Disney World vacation – sure, a half-hour wait for Big Thunder Mountain, an hour for Soarin' or Test Track, and the resort's longest wait – for that week, The Twilight Zone Tower of Terror – taking nearly an hour and half... But now, let's jump forward exactly five years, to the same "off-season" February week in 2020.

That's right – exactly five years later, the top fifteen longest waits at the resort have exploded, with the shortest of the top 15 waits now equal to the longest at the resort in 2015. It's not just that new rides now top the list; it's that wait times for age-old classics have literally doubled – in five years, Space Mountain leapt from an average wait of 46 minutes to 102; Jungle Cruise from 44 to 87; Rock 'n' Roller Coaster from 49 to 105. You can explore Touring Plans's interactive data visualization yourself, and it's likely to leave you with one burning question:

What is going on? While it’s true that, year-over-year, attendance consistently climbs faster than parks’ capacity can keep up with (despite ever-rising prices and diminishing entertainment offerings) while ticket pricing now incentivizes "off-season" visits to spread crowds, there’s a fundamental flaw fans know all too well: FastPass.

At every turn, sluggish Stand-by lines are simply the only choice outside of your three FastPass+ reservations. How have we gone from FastPass being Disney’s greatest operational (and PR) tool ever designed to theme parks awash in stagnant waits, sold-out return times, and pathways packed with meandering crowds with nowhere to go? Today, we’ll dig into the in-depth story of FastPass… and how this panacea for a Disney Parks visit became a pandemic.

Whose line is it anyway?

Okay, so, lines. No one likes to wait in a line. And for most of human history, people didn’t.

The first written account of people waiting in a single-file line comes from the 1837 book The French Revolution: A History by Thomas Carlyle, the author described citizens forming a queue (French for “tail”) at a bakery to collect the post-Revolution scarcity of bread:

“If we look now at Paris, one thing is too evident: that the Bakers’ shops have got their Queues, or Tails; their long strings of purchasers, arranged in tail, so that the first come be the first served.”

The notion of a “first come, first served” system was considered a “French eccentricity.” While we don’t exactly know what form transactions elsewhere in the world took (because, y’know, that’s not a very interesting or important thing for people to record), it likely involved would-be customers gathering around vendors, vying for attention like you’d find at a modern deli counter or bar.

By a century later, the practice of “waiting in line” was spreading. Author George Orwell wrote in a 1944 essay of British citizens queuing for rations during World War II, wondering if visitors to Great Britain would be surprised by English people’s “willingness to form queues.”

And if you think about it, that was barely a decade before Disneyland opened in 1955! The park’s queues back then were made of metal posts and ropes arranged in a back-and-forth maze organizing guests outside of, for example, Fantasyland’s dark rides - simple, old-fashioned queue spaces that remain today.

As Disney legend has it, Walt’s a-ha moment around waiting came in 1960 when he visited Knott’s Berry Farm, the long-running theme park just a few miles north of Disneyland, to see the new Calico Mine Ride designed by legendary designer Bud Hurlbut. To board the slow-moving mine train, Walt was led up a winding path weaving through fake desert rocks and waterfalls. Only as he neared the station did he turn a corner see the waiting crowd that had been hidden from passers-by by the false desert facade, allegedly causing Walt to exclaim, “You ole’ S.O.B.!”

Walt loved that Hurlbut had hidden the wait from guests (making them much more likely to join the line and hand over a ride ticket) and that the themed pathway gave guests something more to do than to zig-zag through a slow-moving rope maze.

Disney began rolling out similarly themed queues in earnest in the 1960s, like the rolling cemetery path to the Haunted Mansion or the courtyards and fountains outside Pirates of the Caribbean, but the first truly immersive queue at Disneyland was probably 1967’s Lost Legend: Adventure Thru Inner Space. In any case, incorporating the queue into the environment became Imagineering's standard through the steel coasters of the 1970s (Space and Big Thunder Mountains), but waiting would be revolutionized soon after...

As with so many revolutions and reinventions at Disney Parks, the reimagining of waiting really hit high gear in the early 1990s. With then-CEO Michael Eisner at the helm, the “Ride the Movies” era was coming to fruition. An influx of intellectual properties fueled a generation of gargantuan new rides of unprecedented style, from Star Tours to Alien Encounter; Indiana Jones Adventure to The Twilight Zone Tower of Terror. Aside from their cinematic scale, these attractions also did something brilliant: they turned queues into part of the attraction.

Like never before, this generation of ambitious attractions was designed to make the wait worthwhile, blurring environmental design, batched pre-shows, and Cast Members into the ride experience. This is where guests began to gain concrete “roles” like being an interstellar traveler or international tourist, dropped not onto rides, but into original worlds and mythologies where they had a role to play. All that world-building happened with guests passing through starport security, deciphering ancient lanuages and tripping booby traps, exploring eerie hotel libraries, or being dropped into dystopian sci-fi settings, allowing them to acclimate to the adventure while waiting.

These multi-stage attractions set the tone for today’s Imagineering pinnacles like Star Wars: Rise of the Resistance, requiring precision timing and incredible calibration to ensure the experience begins long before guests set foot on a ride vehicle. And though Disney Imagineers had helped mitigate ever-lengthening waits by marvelously dressing queues in sprawling, storytelling scenes with lavish pre-shows and high-capacity boarding areas, that created another problem that needed solved… And a miraculous idea seemed to be the solution. Read on…

I think one of the HUGE drawbacks to the FastPass+ system is that it inherently discriminates against the less wealthy. Why? Because Disney assumes that everyone has a smartphone with the latest operating system to support the Disney app. So if you don't have a smartphone or you have an older/ slower phone, then you can't use the Disney app, meaning you can't book a Fast Pass, meaning your day will be spent waiting in lines for *every* ride.
Or should I rephrase that to say, "Disney assumes that everyone *who wants to go to Disney World* has a smartphone that can run the app"? Does that mean Disney doesn't want guests who don't have a smartphone, since that implies that don't have money? Or is the price of a $110 one-day ticket enough to scare off people who can't afford the latest smartphone?

I've been an annual passholder for almost 25 years and it seems like the FastPass experience is getting worse. For example, we decide to go to Epcot on Saturday, so we get FastPasses for Soarin, but not Test Track since we're only allowed 1 "big ride" FastPass. Then the app *forces us* to choose 2 small rides because we're *forced* to get 3. So we choose Journey Into Imagination and Living with the Land, 2 rides that have zero wait times already.
But now my family (all 4 of us) have taken 4 "slots" in both of these rides, even though we probably won't use the FastPass for them because the app forced us to get them. How many other rides have their slots taken by people who aren't going to ride? Sure, this doesn't affect the people waiting in the standby line, but at what point will the data engineers figure out that a lot of rides have tons of FastPass reservations but a fraction of actual riders?

As a former Disney team member and opening crew at animal kingdom, I have seen the FPS problems up close. This article is the best explanation I have read about it. Great job and sad to say, it is all true.

This is exactly the reason we skipped going to Disney World for the first time in 15 years. After last year, the waits were so horrid we were lucky to be able to use our two fast passes, even with booking 60 days out. Even 60 days out was almost impossible to get fast passes for the popular rides. Then you add the dining reservations, which you never get seated on time, so we were constantly losing one of our three fast pass rides because we couldn't eat fast enough to make it. Disney actually has lost us as customers. We got tired of walking from one end of their park to the other, only to find the wait times were ridiculous for the "slow" period when we vacationed. Let's get real, when It's A Small World ride is over an hour during their slow months, late January/first week of February on a weekday, you know you're being taken. So we tried Universal for the first time this year, and behold, it reminded of Disney World when we visited for the first five years! So good bye to Disney until they get it under control. But I seriously doubt we'll ever go back to Disney unless Universal becomes as ignorant. I don't know of anyone who likes to schedule the living heck out of themselves while they're supposed to be on vacation!

You do have the option of getting a FastPass for rides after your three are redeemed. I have gotten on major attractions all day long by using FP, even larger attractions. You just have to know how to work the system.