The 5 Most Important Rules of Walt Disney World Monorail, Bus, and Ferry Etiquette 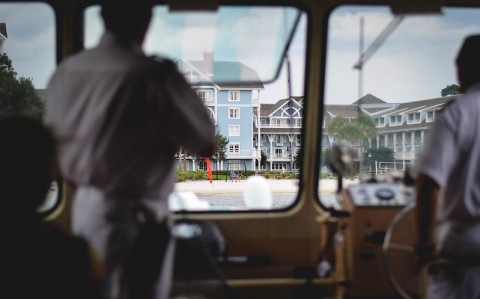 I’m a New Yorker, and even more than acting smug about pizza, music, and art, our favorite thing in the world is arguing about the subway.

You see, the subway is the lifeblood of our city. Everyone takes it, in part because it’s simply the fastest way to get from one place to another, and in part because it’s relatively inexpensive. But when you have millions of people crowding below ground every single day to get to-and-fro, there invariably are some unwritten rules that develop. These rules of etiquette help keep the subway running smoothly, and they encourage riders to show one another respect. Longtime New Yorkers take this etiquette very seriously, and we often share amongst ourselves examples of rude riders who ignore those rules at their own peril.

Walt Disney World’s transportation system is every bit as impressive as the New York City Subway, and it also has its own set of rules for etiquette that help keep everyone sane. Whether it’s your first time to the Vacation Kingdom or your 50th, you’ve probably seen someone violate these rules and drive you just a little bit crazy.

You probably already follow most of these subconsciously, but here are the five key rules for navigating the Walt Disney World transportation system respectfully.

Let Everyone Off Before You Get On

This is probably the cardinal rule of all transportation systems, whether it’s a Disney monorail or even an office elevator, but it also tends to be the one people forget about the easiest. It’s understandable: Everyone’s excited to be at Walt Disney World, and often there’s an incentive to move quickly so as to get more done in a day. But, being pushy and shoving your way past people trying to disembark a bus or shuttle makes you the jerk, not them.

Thankfully, most of Disney’s transportation options mitigate this somewhat by forcing the disembarkation of all guests before beginning the boarding of new parties. The monorail, for example, sees all departing guests exit down the boarding ramp before the crew allows new passengers to board at each stop. But, you do still see this behavior in some places, such as multi-stop buses on property and even many resort elevators.

Fill In All the Available Space

If you’ve ever been to Walt Disney World, this phrase is likely seared into your brain by cast members forcefully repeating it over and over while filling up pre-show rooms and attraction theaters. But, despite its everpresence as an attraction call-to-action, the place this advice is most useful is of course the Disney transportation system.

The same logic applies here, too: Guests scope out a spot on the bus or ferry or monorail that they’re particularly fond of, and then are unwilling to move to give it up. Even though, in doing so, they’re blocking off usable space that another guest could stand in. You’ll notice this a lot with buses at the end of the night – guests refuse to walk all the way to the back of the bus to stand, leaving gaps that could convey more tired guests back to their resorts.

There are a few reasons to make sure you’re filling in all of the space. The first is that it helps let more people on your vehicle, which is just generally a nice thing to do. We’re all tired at the end of the day, and the fewer people who get stuck waiting for the next bus the better. The second is that it actually helps dispatch the buses faster, which in turn gets everyone home faster, and allows the bus to head to its next journey faster. This increases total bus throughput for the system, and decreases wait times for everybody.

The last reason is pretty simple: The bus driver might, depending on how busy it is, take five minutes to implore everyone to fill in all the space, and won’t leave until you’ve done so. You’re just making it easier on everyone to keep your head on a swivel and pack in tight.

On Full Buses and Monorail Cars, Take Your Backpacks Off

This is a New York City Subway classic, but it’s even more important in a place with a high concentration of children.

First, the obvious: Backpacks can take up a fair amount of space, and putting them on the ground allows more people to fit on the bus or monorail car without getting squished. Even smaller backpacks can make you bigger than you might realize, and it’s just generally a good habit to be in.

But the even bigger point: Backpacks can sometimes be tough to control in tight spaces, and if you’re taller than the average person, your backpack is right at perfect face-knocking height for a child. I’ve seen it happy firsthand, where the bus turns and a guy wearing a backpack twists and accidentally smashes his pack into a small child. It’s not good! Just take it off and stow it at your feet – everyone will be thankful.

Thank you for all the good reminders! I have been guilty of the backpack one, I will be sure to keep that in mind next time I'm on any public transportation.