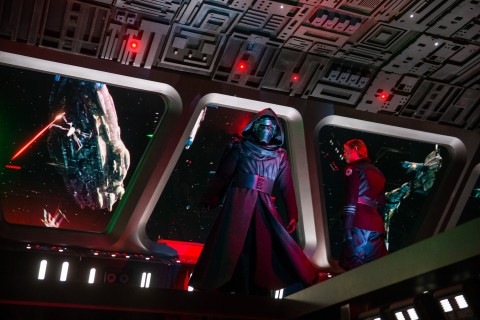 Did you know that some of Disney's best rides don't work right? Yes, attractions grow more complex each year, and when something goes wrong with one of them, park officials face a difficult decision. Should they shut down the ride and disappoint loyal guests? Or should they operate the rides in a more limited state? Disney often chooses the latter by employing something called B-Mode. What is B-Mode, and why should you care? Read on…

Have you ever ridden through a Disney attraction, only to notice that an Audio-Animatronic isn’t working? Have you recognized other glitches where something is missing from a ride that you know by heart? These situations happen somewhat regularly, although some instances are more infamous than others.

Each time that an attraction needs repairs, the maintenance crew liaises with the park management team. The parties work together to decide whether to leave the ride online, and it’s a tough call.

For many guests, the thought of an attraction working poorly is just as much of a buzzkill. YouTube is littered with glitch videos and lights-on versions of Disney rides. Many of these sequences occur when a ride is in a state that could require the deployment of B-Mode.

For cast members, B-Mode means that one of the primary effects on an attraction isn't working correctly. We'll discuss specific examples in a minute, but a general rule is that the best Audio-Animatronic is down. That's a general description, though. The central theme for B-Mode is that a primary element for an attraction doesn't function correctly.

In a few cases, specific special effects have never worked correctly. So park officials have decided that it's better to leave the ride running without them. In fact, a couple of Disney attractions operate in permanent B-Mode because the A-Mode version borders on impossible to fix/maintain.

Here are some rides with B-Mode functions that you might know, along with a description of what they are.

As we’ll talk about it in a moment, the most famous of all B-Modes exists at Disney's Animal Kingdom. Overall, that park has it rough with several malfunctioning rides. I'll list three examples from Animal Kingdom, which vary from minor nuisances to wildly problematic.

While riding Dinosaur, have you ever noticed the hidden Carnotaurus? I’m not referring to the one that’s the primary Audio-Animatronic (AA) on the attraction. I mean the one that’s sometimes visible when theme park tourists glance at the right spot at the photo op.

Attentive guests sometimes notice a special guest. It's the backup Carnotaurus that Disney keeps nearby in case the primary one breaks. So, in the A-Mode version of the attraction, a menacing dinosaur glowers at you. In B-Mode, a timid critter from the same species peeks at you from his defensive position in the shrubs, almost like it’s more afraid of you than vice versa. B-Mode is, by nature, a concession about lesser ride quality.

This one’s the worst offender on the list. The problems with the main AA on this attraction are so well-documented that you’re already familiar with its B-Mode, even if you don’t know it.

During the planning phase for Expedition Everest, someone miscalculated the weight of the Yeti. When the beast stretches out its mighty paw to take a swipe at you, the movement stresses the foundation too much. In fact, park officials worried it would crack.

Clearly, Disney can’t have the Forbidden Mountain in that kind of peril. So, park officials disabled some of the movements of the AA. Since then, guests have affectionately called it the Disco Yeti. That’s not what it’s supposed to do, though. While Imagineer Joe Rohde has promised that he will fix the problem one day, Expedition Everest operates in permanent B-Mode right now.

Very interesting article! I was unaware of the Kali River and Splash Mountain ones, but I don't visit often. I wonder if Universal has any B-modes as well? Now I'm curious!