Think You Know These 16 Extra Iconic On-Ride Quotes By Heart? 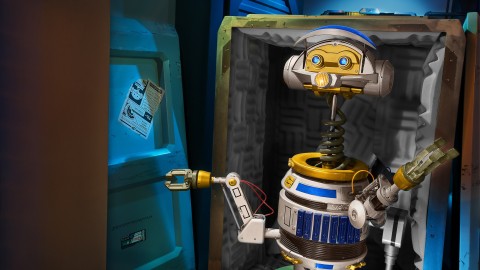 Earlier this year, we gave you a challenge: to see if you could recognize and identify 16 Iconic Ride Dialogue Lines We Bet You Know By Heart… and whaddaya know? You did! From unforgettable safety spiels to bilingual announcements; classic narration to beloved pre-shows, it turned out that lots of Imagineering super-fans have tried-and-true lines down pat.

Naturally, Theme Park Tourist readers took to social media to tag friends and family, relive favorite lines… and of course, suggest the ones we might’ve left out. That’s why we’re back with even more quotes you probably know from Disney and Universal attractions, and this time we won’t shy away from adding in a few timeless lines from closed, classic Lost Legends, either..

If you haven't looked at the first half of this list of quotes, be sure to make the jump there, too. Our challenge today remains the same: read each of these lines in your head… Chances are, the words will expand off the screen and come to life in your mind, fully formed with accents, tone, and tempo intact! If so, let us know which of these quotes (or those from part one) are your favorite… and which we missed between the two!

1. “Remember how easy it was to learn your ABCs? Thank the Phoenicians — they invented them!”

Spaceship Earth is one of the few remnants of the original EPCOT Center - an ambitious, epic, educational journey through time to study the pavilion’s assigned area of industry: communication. Naturally, the story of human communication begins long, long ago, tracing our early Stone Age ancestors through the advent of pictographs and primitive writing.

For now, the epic journey through time and space is narrated by Dame Judi Dench (she's the fourth in a series of narrators since the ride's opening), who explains that it was the Phoenicians with their central role in global trade who developed a common alphabet that made communication easier. And that's just the beginning of the ride's larger-than-life narrative that continues on into the Internet age and beyond.

But will this famous line last into the future? Disney has confirmed that Spaceship Earth will soon undergo a massive, multi-year reimagining that'll shift its main message from "communication" to the much more Disney-friendly "storytelling" (no doubt allowing characters to join the cast, even if only as cameos). That will certainly reshape many or most of the ride's scenes, or at least repurpose them. Will the Phoenicians be remembered and thanked for their role in creating an alphabet that allows stories to be shared between cultures? We'll find out...

Once more, we return to the rattling voice of the Ghost Host who inhabits the “delightfully unlivable” Haunted Mansion. Of course, the booming bass of Paul Frees gives life to the legendary narration written by Imagineering legend X Atencio. Our first list celebrated the Ghost Host’s quotable opening narration from the foyer to the Stretching Room (albeit, begging you not to recite it alongside him).

So here’s where we’ll lump together everything that happens after. After all, the disembodied voice of the omnipotent spectre follows guests’ Doom Buggies through the manor’s cobweb-filled corridors, and along the way, nearly every line feels legendary. In fact, each of the Ghost Host’s spoken lines could probably be its own entry here. But the hopes of being concise, let’s just group together everything from the eerie warning, “Do not pull down on the safety bar… I will lower it for you” to “Beware of Hitch-Hiking Ghosts!” As one entry and a testament to the writing and voice acting skills that bring the Haunted Mansion to life.

Imagineers designed an entire original mythology to underscore Pandora - The World of Avatar at Disney’s Animal Kingdom, casting guests as eco-tourists visiting the verdant moon light years from Earth to learn from the customs and cuisine of the native Na’vi people. The ruins of the human-led military assault on the moon (the subject of the film Avatar) have been long-abandoned and repurposed by the ecological Pandora Conservation Initiative, offering us the rare opportunity to link with a lab-made Na’vi avatar and commune with the Ikran - the dragon-like banshee - to experience the wonder of the Na’vi’s rite of passage.

Pre-shows connect us to PCI staff member Dr. Stevens, who prepares us for the emotional and exhilarating experience of suddenly having our psyche transferred to a Na’vi, and that’s where the line is delivered. Once we’re all paired with an Avatar whose DNA complements our own, we’ll “link that avatar and, uh, fly.”

You never can tell what will make a recorded line take on a life of its own. For the pre-show experience leading to Flight of Passage in Pandora - The World of Avatar, it’s the simple stuttering of “uh” that took Disney Twitter by storm, inspiring fan-made merchandise and even an Instagram analysis by the project’s creative lead, Joe Rodhe. Put simply, the line shows that you can’t always script viral fan-favorite moments; sometimes, they just happen.

Our last list of quotable lines ended with Peter Pan’s Flight and its legendary provocation: “C’mon everybody, here we go!” It’s somewhat appropriate that one of the most perfectly classic dark rides on Earth is somehow echoed in the opening of one of this century’s finest, Harry Potter and the Forbidden Journey.

But to understand why it matters, you have to imagine the set-up. After all, the element of Harry Potter and the Forbidden Journey that’s most astounding may be its ride system. A series of “Enchanted Benches” glide effortlessly down a great, candlelit hall as guests board. But if you lean out and look down the row to the left, you’ll see as - one-by-one, guests flip onto their backs and disappear out of the line. It’s a strangely nerve wracking and inexplicable move made possible by the equally enigmatic ride system that even exiting guests have trouble explaining.

So as your turn to flip backward out of the line of benches draws nearer and nearer, the sudden arrival of Hermione’s voice is a comfort and a sign that there’s no turning back. Just like in Peter Pan’s Flight, her countdown and a quick dusting of floo powder sends you skyward, magically transporting you to Hogwarts’ open air Observatory where your tour can begin...