E-TICKET AWARDS: Which Disney Parks Have the Most Headlining Rides? You May Be Surprised... 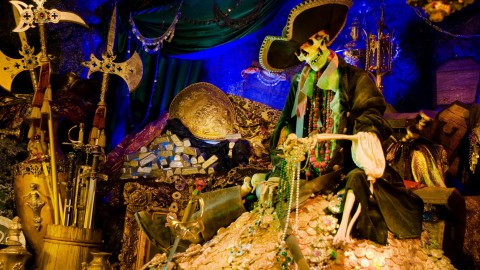 They are the Holy Grail of theme park attractions – astounding, breathtaking, spectacular rides both classic and modern. When you imagine the most amazing experiences at Disney and Universal parks, it’s probably E-Ticket attractions you picture: the coveted, beloved, fan-favorite, larger-than-life masterpiece rides that command spectacular crowds and engage generations.

Here at Theme Park Tourist, we took a global tour of Disney and Universal parks in our Ride Count Countdown to explore the number of rides each park – and ultimately, resort – offered (with some major surprises along the way). How would our rankings change if we instead looked only at the so-called “E-Ticket” headliners?

Today, we’ll count down from the parks with the fewest anchor attractions to those with the most to explore how these headlining rides make (or sometimes, break) a park’s reputation and tourism. But first, we need to set a definition for ourselves. So...

What is an E-Ticket?

But wait – that dollar entry fee was exactly that: admission only. If you cared to experience any of the rides or attractions within, that would cost you. Like many amusement parks of the era, each of Disneyland’s rides carried its own admission fee, albeit paid through the exchange of a “ticket.” For opening year audiences, a “ticket book” would cost an additional $2.25 - about $22 today. Within, guests would receive eight vouchers: a mix of A-, B- and C-tickets, with C-tickets necessary for the most impressive attractions, like Jungle Cruise).

The very next year, the elusive D-Ticket was introduced, with Jungle Cruise promoted to the new, higher-cost, lower-availability designation.

Then, in 1959, it happened. In a massive expansion advertised and televised as a Grand Re-Opening of Disneyland, Walt introduced the world to three attractions so grand, there was simply no way around it: a new ticket was needed. Those three Tomorrowland anchors - Matterhorn Bobsleds, the Monorail, and Submarine Voyage – were the first three “E-Tickets,” requiring the most expensive and elite ride ticket yet (with the Jungle Cruise yet again promoted alongside them to become an E-Ticket itself).

In 1982, individual ride tickets were retired entirely in favor of the pay-one-price admission arrangement we know now. And therein lies the challenge. How do we know if something would require an “E-Ticket” today? For the purposes of deciding how many anchor attractions each park has, we’ll need to set up a definition of what being an E-Ticket today means! While we’ll have to be at least a little subjective in our evaluation, we’ll think of it as an E-Ticket needing to have at least two of these three qualifiers:

With those loose qualifications, let the tour begin…

It’s alright to be depressed when looking at the E-Ticket offerings of the smallest Disney Park on Earth. The subject of a full, in-depth Declassified Disaster: Walt Disney Studios write-up, our tour through the pathetic and underbuilt second gate at Disneyland Paris at its 2002 opening revealed just how bad this “backlot”-style studio park really was. Back then, it had only three rides at all: Rock 'n' Roller Coaster, a pointless Studio Tour, and a Magic Carpets spinner ride. A handful of “Band-Aid” attractions in the two decades since has helped, but the future is riding on a massive expansion set to add lands themed to Star Wars, Frozen, and Marvel, with an unprecedented four upcoming attractions that’ll probably classify as E-Tickets. In the meantime, the park’s in hibernation with barely anything to offer, much less any true stars.

E-TICKET AWARD: The first step in the park’s pivot away from barren backlot, the Modern Marvel: Ratatouille - L'Aventure Totalement Toquée de Rémy fused Disney’s renowned trackless ride tech with multimedia screens. The end result is a ride that doesn’t quite live up to the hopes fans had. If it weren’t for its technological trappings, Ratatouille’s ride experience is probably more of a D-Ticket than a true, headlining E-Ticket. But in Walt Disney Studios’ sparse lineup, it’s a welcome, one-of-a-kind ride… at least until Epcot’s version opens this summer.

Hong Kong Disneyland’s 2005 opening signalled the end of the penny-pinching era overseen by Michael Eisner – the same time period that produced Walt Disney Studios. When it opened, the park was almost laughably small, borrowing from Disneyland in most every area (including a carbon copy of the itty bitty castle) except one: ride count. Hong Kong Disneyland opened with no Pirates. No “small world.” No Peter Pan’s Flight. No Big Thunder Mountain. No Haunted Mansion. A multi-year expansion opened three Hong Kong exclusive mini-lands, and a continuing evolution developed Stark Expo, an expanded castle, and a new Fantasyland expansion centered around Frozen.

E-TICKET AWARD: This one's easy. It must be the Modern Marvel: Mystic Manor. Set in the expanded “mythology” of Disney’s S.E.A. - The Society of Explorers and Adventurers, this epic dark ride doesn’t just introduce some of the coolest characters created just for Disney Parks; it’s also a astounding “spiritual sequel” to the Haunted Mansion and one of the world's best trackless dark rides, sending guests on a spectacular adventure through a museum collection brought to life.

THE WEAK LINK: Among its four standout E-Tickets, the weakest link has to be Space Mountain if only because it’s the least ambitious. A carbon copy of Disneyland’s (which was rebuilt the same year, 2005, for the Anaheim park’s 50th anniversary), the ride is spectacular fun… but ultimately, each of the other three E-Tickets at Hong Kong Disneyland is exclusive to the park.

Not yet considered: Remy's Ratatouille Adventure (2020), Guardians of the Galaxy: Cosmic Rewind (2021)

Since 1982, there doesn’t seem to be a single year that Epcot has been at rest. From its origins as a grand, intellectual, ambitious, permanent World’s Fair showcasing the wonders of human innovation and industry, the park has grown and shrunk in fits and starts to its current form. Today, it’s a mish-mash of brainy concepts, brainless thrills, character invasions, and attempts to downplay its very-’80s origins. The latest round of reimagining at least positions the park to have an identity once again, even if it lacks the cohesion and intentionality of old.

E-TICKET AWARD: A common and clever refrain has it that Epcot is “the best Disney Park with the worst rides.” Looking at the whittled down list of certifiable E-Tickets, that’s probably true. Of the five (soon to be seven!) we can earnestly stand behind, Test Track seems like the best balance of the park’s technological ambitions, futuristic origin, and forward-moving trajectory. Itself a reimagining of the Lost Legend: Test Track, the ride is a TRON-esque experience allowing guests to design then test their own prototype vehicles in an engineering process experiment-turned-thrill ride.

THE WEAK LINK: Replacing the ride that once served as the park’s centering, intelligent thesis (the Lost Legend: Horizons), Mission: SPACE was once imagined as Disney’s next-generation hit: an insanely expensive and outrageously technological simulator capable of realistically replicating the forces of a space launch. In retrospect, it seems obvious that Mission: SPACE is wildly intense, which cancelled plans to export it to Tomorrowlands across the globe and left Epcot with a ride with the technological trappings of an E-Ticket, but a somewhat unenjoyable ride experience that certainly doesn’t feel like a timeless classic or a fan favorite.

Fittingly, after Epcot, there’s no Disney Park on Earth to have been reimagined as wholly as Disney California Adventure. Opened in 2001 to dismal reviews, the underbuilt and underfunded park was creatively starved, lacked noteworthy attractions, and had practically zero Disney characters. In a special two-part insider feature, we first examined the park's pitiful premiere, then its $2 billion transformation. Along the way, it gained an identity (and arguably lost it again just as fast en route to becoming Disneyland’s home for Pixar and Marvel). Either way, it’s relatively low number of E-Tickets shows that it’ll take more than the Avengers Campus to keep California Adventure a fitting complement to Disneyland.

E-TICKET AWARD: Back in 2001, the park’s singular standout ride was the Lost Legend: Soarin’ Over California – the literal birthplace of the Soarin’ rides around the world. But part of the park’s 5-year reimagining brought the Modern Marvel: Radiator Springs Racers – a lightning fast, larger-than-life race through the desert buttes of the Cadillac Range.

THE WEAK LINK: In 2018, the park’s Victorian-themed Paradise Pier got an IP wrap of its own, becoming the strange Pixar Pier of mis-matched modern movie references. The land’s classic-looking coaster, formerly California Screamin’, was “reimagined” to include characters from The Incredibles. Unfortunately, they’re mostly static mannequins. The Incredicoaster is really no better than its bare-steel predecessor and, if anything, misses the mark by aspiring to more but failing to achieve it.

I'd love to see this kind of article explore the various Universal parks. And maybe even other parks like Knott's and Cedar Point, and more.

You can't omit Grizzley River Run from DCA, but include Kali River Rapids in Animal Kingdom. Grizzley is a much better attraction, it is longer and has an extra drop.

I didn't count either of those raft rides! I *did* include Roaring Rapids at Shanghai Disneyland (which is a clone of Grizzly River Run), but only because it feels like a more full experience due to the finale encounter with the animatronic. None really feel like "headliners" to me, and I don't think Disney has figured out how a spinning rapids ride "meshes" with their storytelling yet. But great point.

Love your posts, especially lists like these and the Possibilityland series.

I'm a tad skeptical of Peter Pan's Flight's inclusion as an E ticket though. I don't think it qualifies on scale; was it ever considered an E ticket back in the days when Disneyland still used to issue those single-ride coupons?

Good point! As far as I know, it was only ever a D-Ticket in the actual ticket book days, so maybe it should be removed... I counted it because, in my arbitrary definition, it meets two of my three made-up criteria: "A novel and extraordinary ride system" and "An exceptionally renowned, historic, or sought-after experience." I can see subtracting it from each "castle park" though depending on your definition!