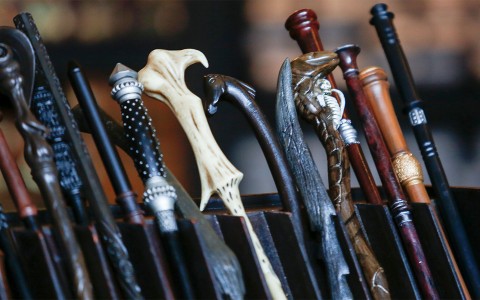 Just ask any Marketing 101 class: Disney and Universal Parks are the places where memories are made! But of course, if you want to cement those memories, you're probably going to need to bring something home with you, right? At least, that's the increasing hope of Disney and Universal, who've discovered a gold mine the likes of which they never imagined.

Far beyond PhotoPass, popcorn buckets, and pins, the long-standing culture of paid-for memories and limited-edition collectibles has kicked into high gear as never before. As theme parks increasingly race to transport their guests into new worlds, an entire galaxy of in-universe snacks and souvenirs has turned the tides of the industry as fans eagerly reserve, wait in line, and pay top dollar for customized creations and technological tools that bring the parks (and their stories) to life.

Here are our Seven Wonders of the Souvenir World – both classics and contemporary! Altogether, the full haul might set you back nearly $500... but along the way, you'd collect some of the most sought-after souvenirs in the industry. Which are worth it and which aren't? We'll dig into the truth as we go...

BACKGROUND: There’s a reason that industry fans often say that the Wizarding World of Harry Potter changed everything at Disney and Universal Parks. While it might’ve been simpler for Universal to stock the land with gargantuan emporiums selling LEGO Harry Potter sets, video games, and action figures, Universal, Warner Bros., and J.K. Rowling instead did the unthinkable: insisting each shop sell only the “authentic” wares of the Wizarding World. From wizarding candy to Hogwarts house robes, guests were willing to wait in line for the chance to buy parchment, quills, text books, and Quidditch gear, proving that if you built guests a world they wanted to inhabit, they'd eat, shop, and play in it.

EXPERIENCE: Naturally, at the heart of the land’s clever merchandising magic is the wand. Ollivander’s (in both Diagon Alley and Hogsmeade) offers a short-and-sweet show wherein a visitor (usually a child, so don’t get too excited) is selected to experiment with a wand of their own before guests are ushered into the shop and set loose among crowded shelves of various woods and cores. Sorting through the cluttered shelves and oblong boxes to get a feel for each wand is fun in its own right.

The most fun thing about the wand, of course, is that it’s interactive. Throughout both Hogsmeade and Diagon Alley, bronze medallions embedded in the cobblestones instruct guests on how to flick the wand and the spell to speak aloud. It may take a few tries, but mastering the moves will cause window displays to spring to life, light chandeliers, unlock doors, or even send fire roaring from chimneys! Finding and testing out the spells is an attraction nearly as exciting as any other in the Wizarding World, and remains one of the coolest and most natural attempts at theme parks creating “interactive” experiences.

VALUE: In the marketplace of “signature” theme park souvenirs, Universal’s $55 interactive wands are somewhat of a bargain! After all, their interactivity brings the land to marvelous life. Even once you’ve left the parks, having a wand of one’s own makes for a great show-and-tell at school or work, and the commemorative Ollivander's box and unfurling map of the land makes for a beautiful display on a desk or mantle. Even better, the wands are known to have quite extended lifetimes and can return to the parks on trip after trip… Any issues? An Ollivander’s assistant is likely to "tune up" your wand for free.

By the way, Universal does offer a catalog of non-interactive wands for $6 less… but we recommend you get the interactive type and drink one less Butterbeer to offset the cost.

BACKGROUND: Pretty immediately after the announcement of Pandora, fans connected the dots and understood that the blockbuster cinematic land was meant to be Disney World’s response to the Wizarding World of Harry Potter just up the road. To that end, discussion boards lit up with debates about what the land’s “wand equivalent” would be. Blue tails? Na’vi ears? Nothing felt quite like the “must-have,” land-exclusive feature that seems like a prerequisite post-Potter.

Then, the land opened…

EXPERIENCE: Don’t think of it as a price – think of it as an adoption fee! In the Windtraders Shop in Pandora - The World of Avatar, the long-abandoned remains of a human military base have been overtaken by a sprawling canvas of vines and roots, transforming the space into a haven of Pandoran nature… including young banshees – the flying reptilian creatures that commune with the native Na’vi people in their rite of passage.

Within days of Alpha Centauri Expeditions launching its ecotourism trips to Pandora, the Banshees were all adopted (that is, sold out). The clever creatures cling to their adoptive parent’s shoulder where a concealable control allows the banshee’s wings to flap, its head to turn, and its mouth to open and close. It’s a magical, living reminder of your visit to a distant alien moon, and it’s pretty darn cute to boot…

VALUE: Banshees are definitely the “gee whiz” take-homes of Pandora, and they’re totally cute, “gotta-have-it” impulse purchases! That said, we’d probably argue that they’d be a better “value” at about half their current price. While they’re adorable, they somewhat lack the personalization, collectability, or extended play of some of the other souvenirs on this list.

So while you might carry it around for the rest of your Animal Kingdom day (removing it for rides), it might not inspire hours of fun after. More than likely, the banshee will make it home in a suitcase only to be sent to a toy box... a somewhat disappointing fate for a $60 souvenir.

Interesting article. While I'm here Brian I want to thank you for your hard work. I've read many of your articles and they are informative, engaging and entertaining.

Can't tell you how much reading this made my day! Thanks for saying it, Jay.

Very interesting article, thanks for a great read. I was wondering though, apart from droids and light sabers, what is the other high-priced item you can buy at Galaxy's Edge? The Jedi robes?

Hi Melanie! I was thinking of Oga's Cantina as a must-see, sought-after experience that's hidden behind a reservation "pay wall." :) Not expensive, but definitely requires a purchase and pre-planning!