We Bet You Know ALL of These Iconic On-Ride Quotes by Heart... 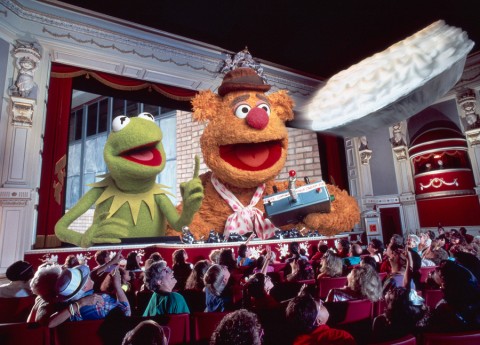 The sights! The sounds! The smells! The snacks! If there's one thing Disney and Universal's parks do well, it's to engrain themselves in your mind; to act as the backdrop to timeless memories. It's no accident that Disney and Universal's best attractions are the ones that become evergreen classics; the kinds of rides you can't to get back to and to share with others. And when designers' quest for memorable moments meet the magic of storywriters and voice artists, some of the most memorable dialogue lines on Earth are born.

Our challenge to you? Read each of these lines in your head… Chances are, the words will expand off the page and come to life in your mind, fully formed with accents, tone, and tempo in tact! Theme park fans can probably imitate each of these 16 lines with surprising precision. If that’s true for you, count yourself among those who have fallen for the hard work of story writers and voice artists that bring these iconic lines to life.

If you manage to recognize most (or all!) of these iconic Imagineering quotes – or if you're wondering why your personal favorite didn't make the list – you just may be ready to make the jump to an even tougher test... even more quotes we bet you know by heart, including some from closed classics and long-lost fan-favorites!

There’s perhaps no classic dark ride as beloved as Pirates of the Caribbean… and for good reason! The 1967 classic at Disneyland is the final attraction that Walt himself shaped from beginning to end. Even though he didn’t live to see the ride completed, his daughters often responded that he did see it…! The final attraction, after all, was exactly as he’d envisioned!

Though it’s the ride’s character-filled second half that features many of its “postcard” shots, it’s the ride’s first half (designed in part by Disney Legend Claude Coats) that sets the tone to make it possible, with visitors drifting through an atmospheric bayou and plantation as fireflies glow. In a region of darkness on the outskirts of the swamp, a skull appears overhead, uttering warnings of the squalls and boarders that lie ahead as an ancient voice calls out, “Dead men tell no tales” - an eerie, rhythmic, breathless cry like a fog horn that underscores the caverns that follow...

2. “Tonight could be the most dangerous night of my life… and yours!”

When Universal’s Islands of Adventure opened in 1999, it felt like the park propelled the industry into the 21st century. Packed with technological attractions and placemaking meant to show that Universal could match Disney beat-for-beat, the park’s magnum opus was certainly the Modern Marvel: The Amazing Adventures of Spider-Man. Born of Universal’s lucky theme park licensing of Marvel, the attraction is still considered one of the best modern dark rides ever.

Just as guests enter into the Daily Bugle’s offices, the villainous Sinister Syndicate attacks New York, stealing the Statue of Liberty. With his normal reporters having cleared out in fear, Editor in Chief J. Jonah Jameson recruits us to take to the streets in a new, all-terrain, news gathering vehicle called a SCOOP to track down the story. Back in the darkened alleys of the Big Apple, Spider-Man arrives with a bang, offering spectacularly sound advice (and a compliment on our 3D glasses) before swinging off to track down the bad guys. It’s a line with memorable intonation and a pretty iconic gesture to match… what a way to kick off a masterpiece attraction.

3. “This here’s the wildest ride in the wilderness!”

“Howdy partners! For your safety, remain seated with your hands, arms, feet, and legs inside the train—and be sure to watch your kids. If any of you folks are wearin’ hats or glasses, best remove ’em—’cause this here’s the wildest ride in the wilderness!”

As any fan of Disney Parks will tell you, sometimes it’s the smallest details that make the biggest impact. It’s likely that when Big Thunder Mountain opened in Disneyland in 1979 and Magic Kingdom in 1980, few would’ve assumed that assigning a raspy prospector voice to the pre-recorded safety spiel would become such an iconic line. And yet, forty years later, the ever-repeating cry has become a souvenir mainstay and a moniker associated with the runaway mine train coasters.

4. “Welcome to Walt Disney’s Carousel of Progress. You’re in for a real treat!”

When Carousel of Progress debuted in 1964, it wasn’t in a Disney Park at all! In fact, the famous revolving theater show was developed for General Electric’s pavilion at the 1964-65 New York World’s Fair! The innovative ride system’s absolutely massive capacity could easily keep up with World’s Fair crowds, ushering thousands of guests per hour into the wonders of “Progressland” and the ease of life brought about by GE’s products and services.

After the Fair’s closure, the ride was relocated to Disneyland in a new, custom-built Carousel Theater. It remained there until GE asked for its relocation to the then-new Disney World, where international crowds (rather than repeat-business locals) offered a chance to spread GE’s product placement message further. As a result, Carousel of Progress has been playing at Magic Kingdom since 1975 (with only occasional disruptions). Curiously, that makes it technically hold the record for the most showings of any stage production in the history of American theater! The lines spoken at the show’s opening are, for fans, a heartwarming indication of the simplicity and ease of the singalong show to follow… truly timeless in every way (a few needed updates excepted).

But for Disney fans, what’s most important is that Walt named it his personal favorite, stating that it should never cease operation. We traced Walt’s personal connection to the Carousel in its own standalone feature, Modern Marvels: Carousel of Progress. But it’s telling that the show is one of only two attractions at Disney Parks to bear his name as a prefix. The other…? Read on...

In my opinion, the most famous line from Spaceship Earth is “Thank the Phoenicians.” However, the monorail safety spiel is definitely the best line from any attraction at WDW.

Great list, really fun read. You can add "You are not the first to pass this way. Nor shall you be the last." Miss that ride!

I loved Maelstrom, and I always wondered who narrated that great attraction. I have always been interested in Disney attraction voices and then I narrated the Twilight Zone Tower of Terror in 1994.