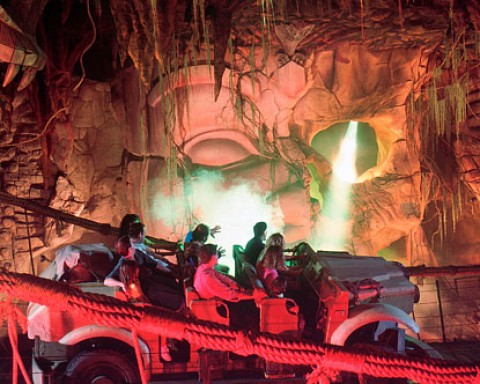 Michael Eisner proudly proclaimed the 1990s as the Disney Decade. His early tenure as CEO and Chairman of The Walt Disney Company had gone so swimmingly that he possessed total confidence in the theme park division.

While the decade started with grand ambitions, it ended with little fanfare as the bloom fell of Eisner’s rose. Still, Disney built some attractions that most would agree are triumphs. Let’s examine the best Disney rides of the 1990s.

At the end of the 1980s, Disney struck gold with a shocking box office blockbuster. Who Framed Roger Rabbit became the second-biggest film of 1988, and Disney wanted to base a ride off the concept. However, the movie had taken seven years to produce, and the attraction worked similarly.

Roger Rabbit’s Car Toon Spin wouldn’t open until 1994, almost six years after the movie. By this point, the Disney Renaissance was in full swing, and the theme had lost some of its mojo. Even so, the ride has proven durable and satisfying for a quarter-century now. It’s one of Disneyland’s most child-friendly attractions. Since I expect Disney to reboot the franchise at some point, I also believe that it’ll get plussed again at some point in the 2020s.

Since this gamified ride debuted in 1998, Disney’s recreated it in every theme park around the world. Hong Kong Disneyland has since reskinned it with an Ant-Man and the Wasp theme, but the ride architecture remains the same under the hood.

On this attraction, guests aim laser pistols at targets. Ostensibly, people want to hit batteries to reclaim them before the evil Emperor Zurg uses them for his intergalactic space fleet. In truth, the specifics don't matter, though.

All variations of Buzz Lightyear are target shooting games, the same kind that Disneyland operated in the 1950s. Back then, Imagineers themed the concept to Davy Crockett. In the modern era, it’s Mr. To Infinity and Beyond, but the idea remains the same. You try to beat your friend by outscoring them. It's addictive and thoroughly entertaining.

The construction of Disney’s Animal Kingdom stands out as Eisner’s most significant achievement of the Disney Decade. He built the proverbial fourth gate at Walt Disney World. Simultaneously, he accomplished something that Walt Disney had wanted to do but couldn’t. Eisner’s team created a combination zoo/theme park.

Kali River Rapids wasn’t an opening day attraction at the park. It missed by 11 months, but it still debuted during the 1990s. Barely. Disney introduced it to the public in March of 1999. The ambitious attraction came with an essential environmental message about the dangers of illegal logging.

Unfortunately, to most guests, it’s just a wet ride on a hot day at what feels like the most scorching of all American theme parks. So, Kali River Rapids comes with plenty of positives, but it’s just a wet respite for a lot of uncomfortably warm park visitors.