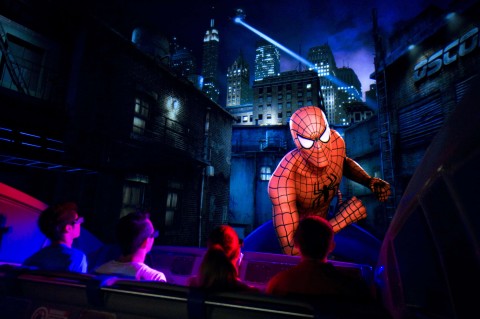 I recently discussed the Mount Rushmore of Walt Disney World attractions. That debate requires numerous ride exclusions due to the sheer volume of iconic Disney attractions. But how would we evaluate the other beloved theme park that competes with Disney? Here’s what I would place on Mount Rushmore for Universal Studios.

When deciding which attractions are worthy of nomination, I need some rules. For starters, the ride must remain in operation somewhere in the United States. As long as it’s still in operation at Orlando or Hollywood, I’ll allow it.

Also, I'm only considering rides here. That's a more significant factor at Disney, but it does rule out Waterworld: A Live Sea War Spectacular and Shrek 4-D, among others. Thankfully, it doesn’t eliminate a legitimate classic, the Studio Tour, which is both a ride and still working today, albeit only at Universal Studios Hollywood.

Potential candidates at Islands of Adventure

Out of the potential Mount Rushmore attractions, I’ve shortlisted Harry Potter and the Forbidden Journey and The Amazing Adventures of Spider-Man. They were no-brainers.

In the process, I chose to eliminate a few other noteworthy attractions. For example, I didn’t shortlist Jurassic Park: The Ride since Universal’s dramatically overhauled it in at least one place. That’s not a sign of greatness.

The Incredible Hulk Coaster isn’t as good as Revenge of the Mummy, in my opinion, and so I dropped it. And I feel strongly that Hagrid’s Magical Creatures Motorbike Adventure suffers from recency bias. I can’t rightfully nominate it for at least five years.

Now, the discussion takes a turn toward the contentious. Everyone will have different opinions about which Universal Studios Florida attractions merit shortlisting.

Personally, I favor rides with some gravitas and history behind them over the hot new thing. It’s the same logic employed for Hagrid’s Motorbike Adventure, which I have to leave out. It hasn’t earned a spot on Mount Rushmore…yet.

Under these guidelines, a great ride like Despicable Me Minion Mayhem doesn’t quite have the track record to qualify. Also, I’ve mentioned that The Simpsons Ride is the one that I love the best. Still, I accept that this is a minority opinion.

Harry Potter and the Escape from Gringotts teeters on the brink, but I’m shortlisting it anyway. It’s too good to discard at this juncture. However, I’m taking Hogwarts Express out of the discussion even though it’s one of the best overall Universal rides. A form of transportation is just too weird as an inclusion.

In deference to my wife, I’m shortlisting one of her favorite rides, Men in Black: Alien Attack, which undoubtedly qualifies as significant to the park’s history. And then there’s Hollywood Rip Ride Rockit, which I think is the most overrated ride in Orlando. So, it’s out. I’m also tossing out Race Through New York Starring Jimmy Fallon due to recency.

I already mentioned that I like Revenge of the Mummy better than The Incredible Hulk Coaster, which gave away that it’s on the shortlist. Finally, I’d have you come at me with torches and pitchforks if I didn’t include E.T. Adventure. And so would my editor.

This park requires no effort or debate. Virtually everything here was available for consideration at the previous two parks. If I didn’t mention it by now, it doesn’t deserve a nomination. The one unique attraction here that matters is the Studio Tour, the oldest one under discussion. It’s anchored this park for 55+ years, which means it’s a definite possibility.