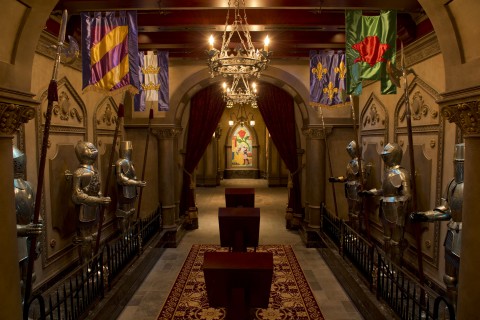 It is a good time to be Disney.

Despite some rocky seasons for attendance and media coverage, Disney is entering something of a banner season. They successfully launched Disney+, introduced a whole new transportation method to Epcot and Disney’s Hollywood Studios in the Skyliner, and after a bumpy summer for Galaxy’s Edge, Star Wars: Rise of the Resistance has proved an attraction so successful that it keeps reaching capacity before the park even opens.

These successes aren’t to say that Disney doesn’t have some foibles to work through. One area where the company has come under strong scrutiny in recent years is dining. After the Eisner-era, quality waned at many Disney dining establishments, especially after the arrival of the Disney dining plan. Restaurants that once served world class food just didn’t seem to hold the same sparkle. Considering these disappointing shifts, it would be easy to say Disney no longer has a strong stake in the theme park dining game… until you take a moment and compare them with the competition.

For all of Disney’s ups and downs, they still have other US theme parks completely trounced in the area of dining.

During our recent exploration of World-Showcase-style dining at other US theme parks, we quickly realized that Disney truly is in a league of their own when it comes to food. Despite the best efforts of parks like Universal Studios, Busch Gardens, Knott’s Berry Farms, and Sea World, they all seem to fall into the same traps: inconsistency, lack of healthy options, and lack of variety. Indeed, most theme parks seem to settle for filling park menus with burgers, fries, American comfort food, and maybe a little family Italian for good measure. Universal Studios has made a laudable effort to break this pattern, but even their best in-park restaurant, Mythos at Islands of Adventure, suffers from consistency problems despite its excellent theming and sometimes-excellent food. The only area of dining other parks seem to have Disney soundly beat at is prices, but at what cost? Even with Disney’s own issues with consistency and occasionally messing with restaurants that should be left alone, they still come out on top.

What is it that sets Disney dining so far apart from the competition in the states? Here’s what we found that makes all the difference.

Most people get the same picture when we think of theme park food—burgers, hot dogs, fried chicken, funnel cakes, spaghetti dinners, and maybe some BBQ. While Disney does a great deal to cater to demographics who prefer these options (especially kids), which is great, they don’t fall into the trap of American fare being the only type of food available. Indeed, there is so much variety for dining at Walt Disney World that if you don’t have a few meals there, you will definitely be missing out.

Even removing Disney’s outstanding dining options at resorts and Disney Springs from the equation, Disney’s parks alone burst with variety for dining. At Magic Kingdom alone, you can enjoy French fare at Be Our Guest, taste the tropics at the Jungle Navigation Co. Skipper Canteen, and enjoy family Italian at Tony’s Town Square Restaurant as a few examples. Disney’s Animal Kingdom has some of the best food in the entire resort, with a wide range of international options like an African buffet at Tusker House, South Asian quick fare at Yak and Yeti, tasty BBQ at Flame Tree, and fine dining at Tiffin’s. Epcot has World Showcase—enough said. Even Disney’s Hollywood Studios has finally improved their dining game with the addition of Docking Bay 7 and Ronto Roasters on top of their popular American food options.

In short, let it never be said that someone couldn’t find anything to eat at Walt Disney World. On a related note, Disney does a better job than just about any park we’ve seen with guests who have special diets or allergies, ensuring they have the best experience possible. Some of their recent additions for vegan diners are especially tasty! It is also much easier to eat healthy and still enjoy delicious food at Disney parks than any other theme park we’ve seen.