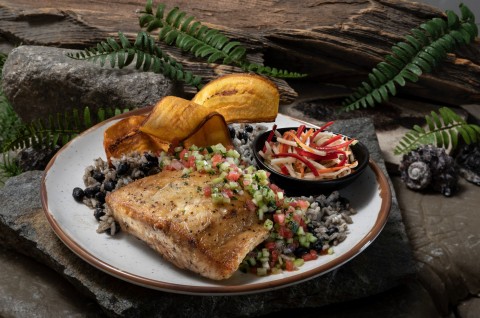 There’s no question that Disney is in something of a league of their own when it comes to theme park dining. The vast majority of theme park restaurants across the US fit a familiar mold offering safe classics likely to please families and picky eaters. Even at some of the top parks in the country, it can prove a serious chore to find dining options beyond burgers, hot dogs, fried chicken, pizza, and maybe a little family Italian for variety.

Epcot’s World Showcase remains something of a gold standard when it comes to theme park dining, giving guests the chance not only to explore idealized portraits of eleven countries but to taste those nations’ cuisine—indeed, during the Epcot Food and Wine fest, the whole park fills with eclectic dining pavilions from around the world. Disney’s Animal Kingdom offers similar excellence in presenting African and Asian flavors, and across the country, Disneyland and Disney’s California Adventure put up an excellent show with options like Cocina Cucamonga, Lucky Fortune Cookery, Alfresco Tasting Terrace, and the French Market.

If you love World Showcase or any of Disney’s international dining options, other theme park restaurants might feel painfully boring in comparison. However, that isn’t to say Disney has a monopoly on world cuisine. Indeed, that’s what makes these eight US theme park restaurants outside “The Disney Bubble” stand out so much…

We’ve not exactly pulled punches in the past pointing out that Universal Orlando Resort’s park food choices aren’t great, especially when compared with Disney. While searching for variety in the food inside Universal Studios Orlando might seem a daunting task, but there is at least one gem in that park that manages to deliver a commendable option bringing to mind World Showcase’s UK pavilion.

Finnegan’s Bar & Grill is easy to miss on a busy day, but this comfortable pub stands apart from the rest of the offerings at Universal Orlando thanks to its Irish comfort food menu. There’s nothing sadder than an “Irish” pub that only serves loaded nachos and pizza, but Finnegan’s manages to not fall into this trap.

Finnegan’s menu contains a great range of UK pub fare like Scotch eggs, potato and leek soup, fish n’ chips, bangers n’ mash, and shepherd’s pie. The selection is so surprisingly good that we can forgive them for having a fruit plate with the oh-how-my-Irish-soul-cringes name of “The Leprechaun’s Rainbow”. Finnegan’s even offers a few vegetarian dishes, a huge find for this particular park. If you’re looking for a sit-down experiences at Universal Studios Orlando, this Irish pub is a sound choice.

When we think of theme parks, we tend to think of the major players in the business—Disney, Universal, Busch Gardens, Knott’s Berry Farm, and even Sea World. However, if you’ll be visiting Holland, Michigan anytime in the future, you may come across a park that largely flies under the radar compared to its bigger cousins.

Nelis’ Dutch Village could almost be described as a lost Dutch World Showcase pavilion hidden on the other side of the country. The quaint park is a local favorite that celebrates Dutch culture through food, historical recreations, children’s rides, and learning experiences (including authentic cheese making—yum!). A beloved stop within the village is The Hungry Dutchman Café, a quick service restaurant serving authentic Dutch cuisine like kroketten, Erwtensoep soup, and metworst sausage. While the café does serve a number of more familiar dishes for picky eaters, those looking to try Dutch flavors for the first time won’t be disappointed—indeed, some experts actually name The Hungry Dutchman as one of the best theme park cafes in the country, placing it in the same category as many Disney favorites!

Don’t confuse Jurassic Café with its Florida counterpart, the basic BBQ stop Thunder Falls Terrace. Indeed, don’t even confuse it with the restaurant’s previous iteration which offered painfully homogenous pizza and chicken dishes. Jurassic Café has a whole new face, and wow—Universal seriously “spared no expense” to upgrade their foodie scene with this one.

To pair with the land’s renovation from Jurassic Park to Jurassic World, Jurassic Café’ has an entirely new menu serving tasty Costa Rican cuisine. The new restaurant couldn’t be more different than its previous version and is a case study in how to renovate a theme park restaurant right. The menu has been completely transformed to serve a rich array of mouth-watering dishes like slow roasted mojo pork and jackfruit, citrus glazed chicken, gallo pinto, plantain chips, and roasted mahi mahi.

Reading the reviews for the café from its previous version to the new iteration is like hearing people describe two completely different restaurants. People seem to love the new Jurassic Café, to the point that some said they couldn’t believe they were eating theme park food. Needless to say, this is a serious upgrade for a location that used to be known for terrible burgers! Clearly this experiment worked in Hollywood, so we only have one thing to say, Universal: Get into the game, Florida!