Behind the Ride: Mad Tea Party

Quick! Name an attraction that everyone knows but not everyone wants to ride. Out of all theme park options in the entire world, a singular name should spring to mind. Mad Tea Party somehow claims the sort of branding that corporations spend millions of dollars trying to earn.

Yet, despite the fact that everyone can recognize Mad Tea Party at first sight or by name, far fewer people are bold enough to ride it. People know that Mad Tea Party is synonymous with vomit comet. It’s an attraction that you should never ride after lunch lest ye fall victim to the dreaded protein spill. Despite its nauseous reputation, this ride maintains an elevated status in theme park industry. Let’s go behind the ride to learn what makes Mad Tea Party spin tick.

The experience: Spinning in circles for no good reason Image: DisneyUnless you fought in the Great War, Mad Tea Party is older than you. When Disneyland opened for the first time in 1955, this attraction was one of the nine opening day rides that remain in operation today.

The masterminds at WED Enterprises somehow designed this many original ride concepts that have stood the test of time. Arguably none of them is quite as influential as Mad Tea Party, although it’s a cheat to reference it that way.

In truth, this ride steals from one of the most familiar ride concepts in the world. It’s a glorified carnival attraction akin to the Tilt-A-Whirl and other spinner rides that you know from your childhood. 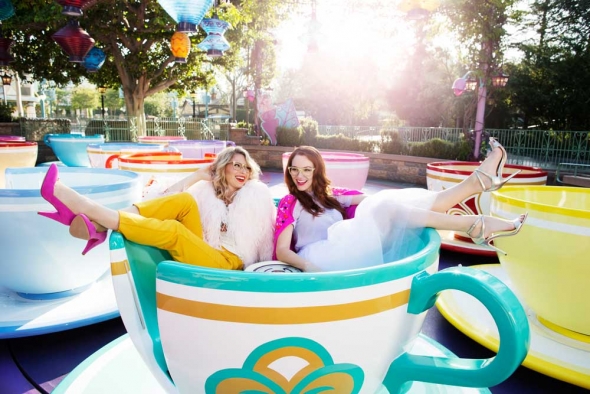 Image: DisneyOn the Tilt-A-Whirl, one flat surface operates as the base for a series of free-spinning ride carts. The base doesn’t move, but the elements surrounding it can have any range of movement needed. Generally, they spin in a circle around the base.

With Mad Tea Party, the ride carts are thematic Tea Cups that spin twice at once. Yes, Imagineers doubled down on the concept. The ground of the attraction works as the base, while each Tea Cup spins around it in a counter-clockwise formation.

The experience: Spinning in a circle within the circle for no good reason

The trick: Hiding an integral ride mechanic directly on the ride cart 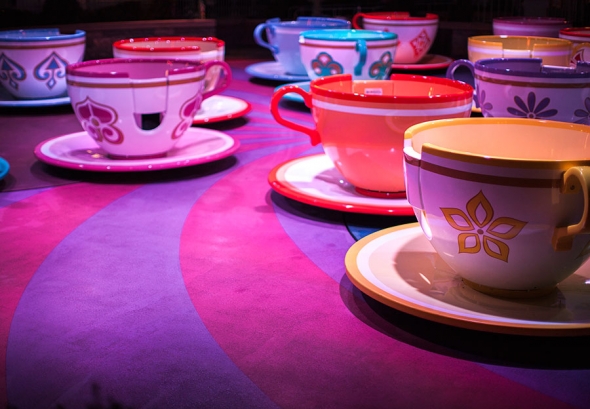 Image: DisneyWhat has differentiated Disney’s version from day one is that it features a second kind of motion. The Tea Cups claim their own independent movements, which go clockwise. In a perfectly fitting way for an Alice in Wonderland-themed attraction, you sometimes go clockwise and counter-clockwise at the same time!

The technology seemed truly remarkable for the era. Imagineers constructed the ground as a primary turntable. It’s the base that forces the counter-clockwise movement. On a regular Tilt-A-Whirl attraction, the Tea Cups would spin on this turntable, and that would be enough. From the earliest days, Walt Disney expected more of his Imagineers, though.

In a sense, the attraction works as a Matryoshka nesting doll set. Three turntables stack on top of the main one. That’s a total of four turntables, three of which are hidden in plain sight. The ride structure is eerily similar to Alien Swirling Saucers, but the additional turntables are more apparent on that one because they sometimes detach. 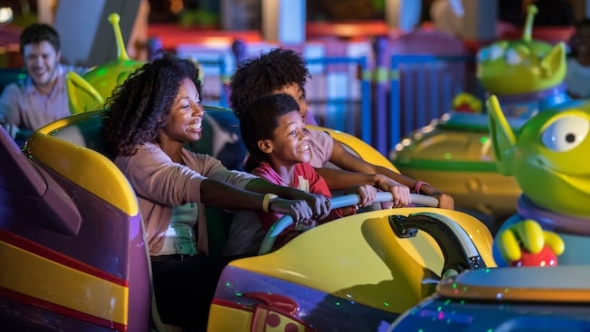 Image: DisneyEach of the inner, smaller turntables on Mad Tea Party spins clockwise. However, there’s even more motion involved. These turntables connect six Tea Cups. Each of these ride carts comes with its own motion, which the guest controls.

That freedom of motion is entirely dependent on the rides, which explains why you never want an enemy onboard your Tea Cup. They’ll spin you into oblivion, and you won’t keep any food down for the next three days. Guests choose which way to turn the wheel and thereby decide the traffic. It’s three-tiered motion, the kind of madcap nonsense one would expect to experience in Wonderland.