Showdown: The World of Pandora vs. Star Wars: Galaxy's Edge 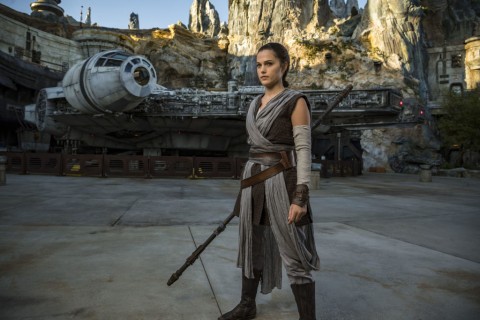 Things are about to get real for some Disney fans…

We are entering a very exciting time to be a Disney parks fan. While immersion has always been a prized value in Disney parks design, the House of Mouse took this concept to new heights with the launch of The World of Pandora at Disney’s Animal Kingdom and, more recently, Star Wars: Galaxy’s Edge at Disney’s Hollywood Studios and Disneyland.

The World of Pandora opened in May of 2017 and seemed like Disney’s strangest gamble to date. Why would Disney choose James Cameron’s Avatar—a film that was certainly a huge financial success but never really left a strong footprint—for a themed land? Largely, it’s speculated that Disney snatched up the rights to Avatar in response to Universal’s wildly successful Wizarding World of Harry Potter. Indeed, Disney originally had the rights to Harry Potter, but they let the deal fall through only for Universal to snatch up the chance.

Disney wasn’t about to make the same mistake again, and it seemed like a logical choice to choose Avatar since James Cameron was insistent on potential dates for sequels coinciding with the land’s opening. That didn’t necessarily happen (supposedly the first of the Avatar sequels will finally arrive near the end of 2021) , but despite all odds, The World of Pandora somehow proved an unmitigated success. Attendance at Disney’s Animal Kingdom skyrocketed, and guests lined up in droves, particularly for the land’s main attraction, Avatar: Flight of Passage. In a strange way, the World of Pandora did actually manage to revitalize Disney’s Animal Kingdom, drawing new fans to the park not because of its namesake film but because guests grew genuinely curious to experience the overall excellence of the land.

It’s no secret, however, that The World of Pandora was likely a test run for a much bigger venture. 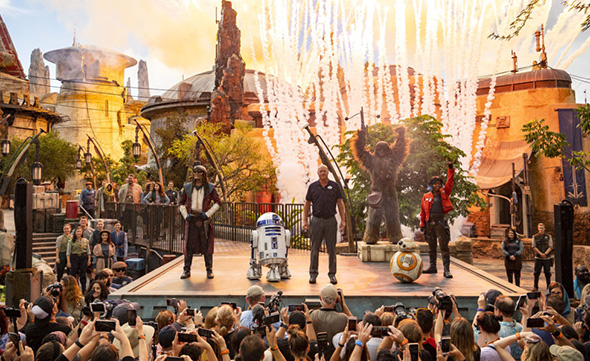 When Disney announced “Star Wars Land” in 2015, the buzz was far, far higher than any of the publicity leading up to the World of Pandora. Star Wars is one of the most beloved film franchises in existence, to the point it’s been dogged by controversy every time new films have been introduced. By the time opening dates in 2019 were announced for Star Wars: Galaxy’s Edge in Disneyland and Disney’s Hollywood Studios, expectations were through the roof.

Ironically, despite being a far more popular property, Star Wars: Galaxy’s Edge ran into way more problems surrounding its opening than Pandora did. Staunch fans of the classic trilogy were upset the land wasn’t based in the world of the original films. Others criticized the notion the land was opening with only one attraction, Millennium Falcon: Smuggler’s Run. People were extremely nervous about the crowds the land would draw, and its suspected many held off on trips, waiting things out until crowds dispersed and the land’s second attraction, Rise of the Resistance, opened. To make matters worse, while the land had a very good turnout for opening day in Disneyland, Disney parks suffered a drop in attendance before the opening of its Walt Disney World counterpart. The land was a little too good at crowd control, and the media and influencers were quick to cry failure at the appearance of an empty park.

Despite a bumpy start, Galaxy’s Edge was well-received by those who visited who praised its insane detail, immersiveness, and intriguing story elements. The Walt Disney World opening drew such insane crowds that the Disney overlords ended up opening the park early, and after an expected lull in September, attendance has steadily increased. The land remains a huge point of buzz on social media and is quickly building an extremely loyal fanbase of both Disney and Star Wars fans. 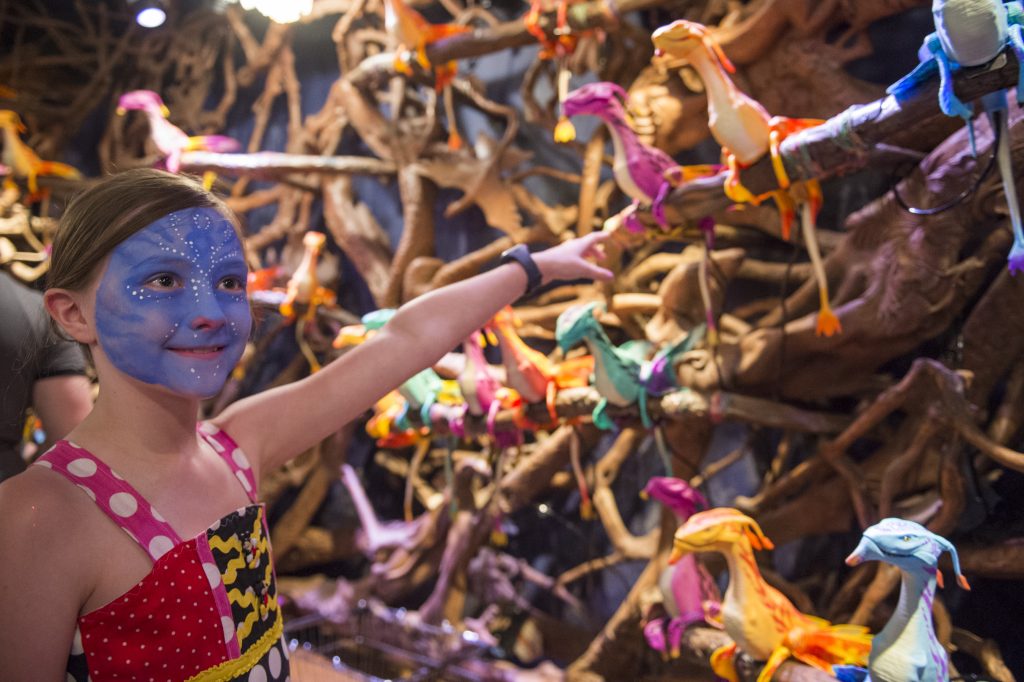 So, which one is better?

It is near impossible not to draw comparisons between Pandora and Batuu (the Star Wars world Galaxy’s Edge is set on). Fans of Pandora may find themselves judging Galaxy’s Edge through that familiar lens and vice versa. There’s no easy answer to this question, so we decided to take a closer look at specific elements in both of these incredible lands to see which comes out stronger. Which side are you on? 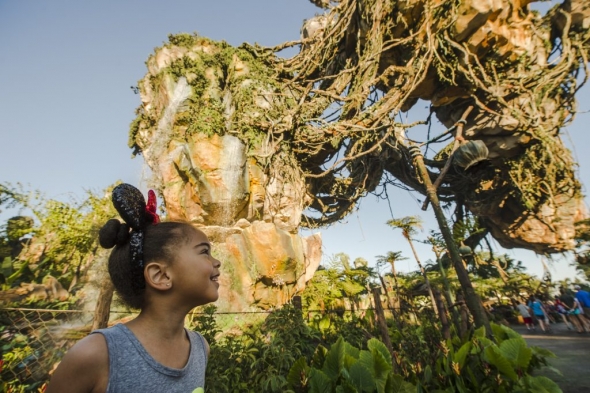 One of the biggest draws to The World of Pandora was, ironically, the land itself. Even when lines for Flight of Passage were so long that no one would dare join them, curious guests within Disney’s Animal Kingdom detoured to explore the wonders of Pandora. The land is inescapably beautiful and otherworldly with plenty of mysterious corners to explore. One friend described it as stepping into the Garden of Eden. Pandora also has a strong appeal for science fiction fans since you don’t have to know a thing about Avatar to get the references and understand the general vibe of the outpost. I know that we made mental connections to a dozen science fiction properties when we visited, from Brandon Sanderson’s cosmere books all the way to Star Wars: Clone Wars.

Galaxy’s Edge, on the other hand, holds a different appeal. We still hold to the idea that Disney made the right call setting Star Wars Land on a new planet, Batuu, because they were able to pull elements from across the Star Wars saga and knit them together into a coherent experience. The Black Spire Outpost feels like something straight out of Star Wars, with familiar influences from Tatooine, Yavin IV, Jedha, Ahch-to, and even the Old Republic. There is so much to explore within Galaxy’s Edge that it is very easy to forget that you’re in Disney’s Hollywood Studios. It also helps that it is MASSIVE, with sections dedicated to The Resistance, The First Order, a sprawling marketplace, and Ohnaka Shipping Solutions, the current resting place for The Millennium Falcon. 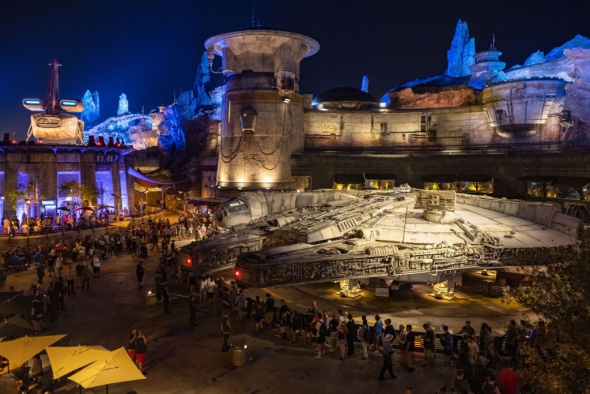 You could spend hours just uncovering the Black Spire Outpost’s mysteries, a point Disney took advantage of by making elements throughout the land interactive. Indeed, there’s even an app to encourage exploration (a concept they test drove in Pandora, ironically). The Star Wars Datapad game in the Play Disney app turns your phone into an in-world device that can tune into frequencies, translate Aurebesh, scan crates, and “slice” terminals, droids, and ships. Many of these elements actually respond to you with lights, sounds, and other effects. You can even participate in jobs to help the Resistance, First Order, or just make credits for yourself.

Overall, both The World of Pandora and Batuu bring a lot to the table. Pandora wins for overall beauty, splendor, and inspiring wonder. It will also be the preferred location for guests looking for a more relaxing vacation experience where you can just take in the spectacle of a magnificent world. For immersiveness, interactivity, and for adventurous souls, we have to give it to Batuu. There is just so much more to experience in Galaxy’s Edge even if you are doing nothing more than exploring the land. 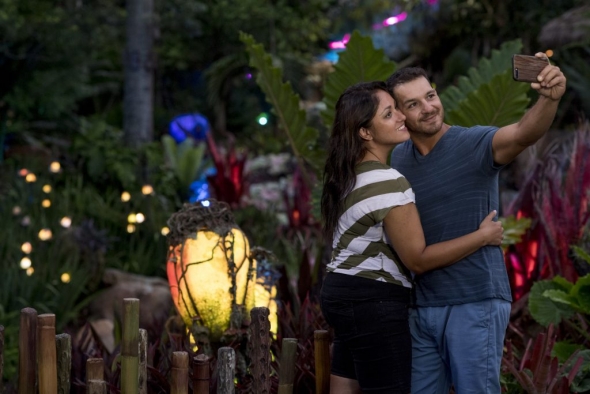 We could write an entire article about demographic appeal in both Pandora and Galaxy’s Edge, but to keep things brief, this is another area where both lands thrive.

Springboarding off our exploration of the land itself, Pandora has great all-ages appeal. From small children to older seniors, there’s no age limit on being amazed by beauty and wonder. If comparing both Pandora and Batuu, it seems likely that older audiences as well as small children who don’t really have any attachments to Star Wars will probably like Pandora more. Adults who prefer a more relaxing vacation will also probably prefer Pandora. While we’ll dive into attractions shortly, it’s safe to say that Avatar: Flight of Passage holds a wider appeal for age ranges than the jostling, video-game like Millennium Falcon Smuggler’s Run, and Navi River Journey definitely will hold the most appeal for adults.

Galaxy’s Edge comes with the weight of a broad and ever-fluctuating base of Star Wars fans. Elementary school-aged kids are probably familiar with Star Wars: Resistance and Star Wars: Rebels. Many teens grew up with Star Wars: Clone Wars as well as the prequel trilogy. Adults tend to trend most loyal to the original trilogy, and they also tend to prove to be the most fickle audience. The key connective tissue is that kids, teens, and adults who love adventurous settings, exploration, and action will likely prefer Galaxy’s Edge. The land also has huge appeal to kids in its build-a-droid merch option (more on that later), and both teen and adult audiences who appreciate video games (especially MMORPG’s) will also definitely find much to love in Galaxy’s Edge… Also, needless to say, die hard Star Wars fans will love it, precluding any strong aversions to the new trilogy.