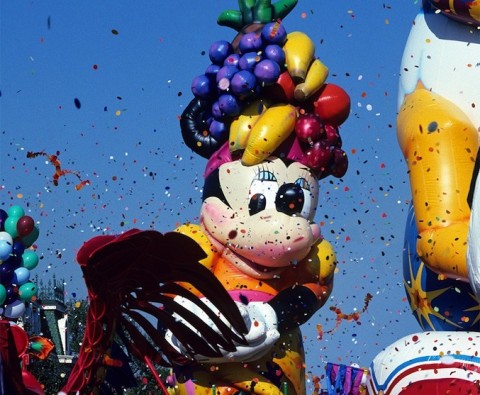 What does it take to build a Disney park? These days, it’s some combination of state-of-the-art engineering, precious IP, pixie dust… and an almost overwhelming amount of nostalgia-based marketing. Disney doesn’t just dabble in nostalgia, they use it as a cornerstone for some of their most famous lands. Frontierland, for example, calls to mind society’s long-past obsession with the Wild West, while Main Street, U.S.A. plays on idealized concepts of turn-of-the-century small-town America.

Disney knows how to mine nostalgia for its own properties, too, as evidenced by the recent resurgence of 1990s-style merchandise based around the films and characters they produced during their illustrious Renaissance period. As far as attractions and entertainment is concerned, they elected to revive Soarin’ Over California in hopes of drawing more guests to Disney California Adventure this summer, while Disneyland saw a second limited-time return of the 1972 Main Street Electrical Parade, currently scheduled to run through the end of September 2019.

It’s not as if there isn’t a market for it. Judging by the overwhelmingly positive response on social media and elsewhere throughout the parks, fans are eating up every VHS-shaped Lion King clutch, live-action film remake (whether or not they’re favorably-reviewed, they get butts into the seats), and revived attraction. Although nostalgia-driven promotions and park elements have traditionally been big money-makers for the company, there are certainly some parts of Disney’s past that don’t deserve reconsideration -- from failed attractions to short-lived parades and shows. Let’s take a look at some of the things Disney would be better off leaving in their past.

These days, you’d be hard-pressed to find face characters emulating “real” people at the Disney Parks. Aside from characters like Rey and Vi Moradi, both of whom roam Star Wars: Galaxy’s Edge on a frequent basis, other characters who might pose copyright problems -- think Giselle from 2007’s Enchanted (played by Amy Adams) -- are nowhere to be seen.

That wasn’t the case in 1995, when Disney’s Hollywood Studios played host to a stunt show based on the 1995 sequel Ace Ventura: When Nature Calls. The quirky (and often politically incorrect) detective was made famous by Jim Carrey in the early 1990s, but such star talent was far out of Disney’s reach for the park’s short-lived show.

Calling it a “stunt show” might be a little generous. Over on the Streets of America, an emcee guided Ace Ventura (portrayed not by Carrey, but a stunt actor) through ten minutes of ill-timed gags and gimmicks as he chased after a large spider puppet. Ventura scaled the rooftops over the New York Backlot, ziplined between buildings, wrestled with the spider puppet (or, in some cases, an albino bat fashioned after the one he seeks in the film), and finished his performance by falling through a roof, sparking a small poof of smoke and confetti. Following the show, he feigned reluctance as he was pressured into meeting with guests for photos and autographs.

Several decades later, the Ace Ventura films have not, let’s say, aged very gracefully. Aside from issues with the source material, however, the stunt show itself was neither particularly funny nor particularly impressive. It doesn’t appear to have survived longer than 1996 -- and, while Hollywood Studios may not have much in the way of live street entertainment these days, it feels almost certain that, if need be, Disney could devise an alternative at least slightly more entertaining.

The parade followed the closure of the Disney Character Hit Parade, an ambitious endeavor that showcased 11 floats, characters from at least nine feature-length animated films, and over eight dozen performers. It reportedly broke some notable ground as the first parade to prominently feature characters from the then- newly-released The Little Mermaid, and managed to tie together very disparate characters, songs, and moments with a rousing theme of “Zip-a-Dee-Doo-Dah” for its grand finale.

With its beautifully-sculpted floats and interesting, if not mesmerizing performances, the Disney Character Hit Parade held a two-year engagement in Walt Disney World. When it was finally replaced, something much bigger, brighter, and entirely more garish appeared. The 20th Anniversary Surprise Celebration Parade borrowed liberally from Disneyland’s 1990 Party Gras Parade, with floats so exaggerated and enormous that they nearly reached the tops of Main Street’s full-sized shops and restaurants.

The disconnect, perhaps, came from the fact that the 20th Anniversary parade was not intended as a celebration of Mardi Gras, a pre-Lenten Carnival tradition dating back to the 17th century (if not much earlier). Stripped of any relevant tie-in to the holiday, the recycled floats and oversized heads of Roger Rabbit, Minnie, Donald, Pluto, Goofy, and Mickey simply overwhelmed the delicate architecture of Main Street, both a little obscene and frightening as they took over the park in explosive color.