Behind the Ride: Alien Swirling Saucers 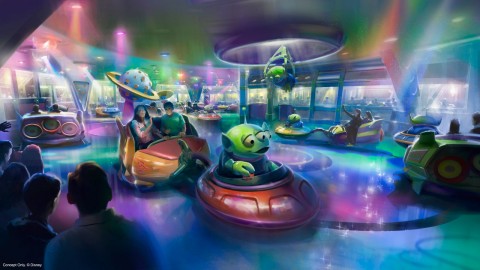 One of the most memorable scenes from Toy Story takes place at Pizza Planet. The arcade here is where Buzz Lightyear naively believes that he can board a spaceship and take an intergalactic journey home. Instead, he discovers a series of adorable zealots, squeaky toys with three eyes.

Sometimes called the Little Green Men, these aliens won over the hearts of movie viewers due to their love of The Claw, the entity that carries them into the great beyond. At Toy Story Land, Imagineers have recreated the premise with an attraction that delights children and parents alike. Let’s go behind the ride to learn why Alien Swirling Saucers is so much fun.

The Experience: Entering a toy playset come to life

The Trick: Shrinking guests down to toy size…figuratively

Image: DisneyHave you ever been to a planet called Pepperonia? Those of you who have ridden Alien Swirling Saucers can answer yes. The premise of this attraction is that Andy, the owner of all the items that populate Toy Story Land, has won a prize.

The last time that he visited Pizza Planet, Andy picked up a playset featuring the Little Green Men and their overlord, The Claw. This toy set spins the Three-Eyed Aliens around in a swirling motion, almost as if they're pilots of colorful spaceships. And color is vital to this premise, as you'll see.

When Andy returns from Pizza Planet, he sticks his new playset in the backyard beside his other prize, the half-assembled roller coaster, Slinky Dog Dash. Due to his size, Andy could never fit in one of these vehicles. But that’s the genius of Toy Story Land.

When you enter this themed land, you shrink down in size to become a toy. As a miniature version of yourself, you're able to fit in the backseat of one of these intergalactic vessels, although it's not entirely clear how you're able to breathe. I guess toys don't need air.

The Experience: Bringing elements of Pizza Planet to life

The Trick: Building a line queue that immerses you in Andy’s fictional world From the moment you prepare to enter the line queue, you’re already swept into a fully realized world. The guards “blocking” your path are Pizza warriors, planetary guards whose chests look like pizza pans. Their weapons of choice are pepperoni slices. These creatures are lifted directly from the film.

Standing to their left is the renowned toy explorer who discovered Pizza Planet, Buzz Lightyear. You haven’t even entered the line yet, and Alien Swirling Saucers is already telling a story. Early in the queue, the colors on the lamps and fences are Buzz Lightyear’s blues and greens. The images on the roofs are all from the Toy Story universe, too.

On one side of the first roof, a Buzz Lightyear “spacecraft” seems ready for launch. Upon closer inspection, you’ll notice that it’s the packaging for the Buzz Lightyear toy. On the other side, an easy-to-miss Toy Soldier is standing sentry beneath a satellite dish. In the middle, Buzz mans the helm. And you might not have noticed anything else. An essential rule at Disney theme parks is to remember to look up from time to time!