The Best Walkthrough Attractions at Disney and Universal Parks 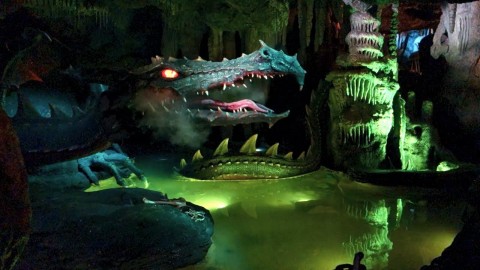 From gliding through the skies to churning beneath the waves; off-roading troop transports to effortless Doom Buggies; spinning SCOOPS to flying benches... we celebrated the most spectacular ride systems ever developed in our special Seven Modern Wonders of the Theme Park World feature...

But in all the decades of innovation that have created new ways to whisk guests away into haunted mansions, ancient temples, comic book cityscapes, and underwater caves, there are still spectacular attractions scattered around Disney and Universal parks using a much simpler mode of transportation: your own two feet.

Walkthrough attractions have been around for more than a century, from early laff-in-the-dark Bill Tracy Whacky Shacks to esteemed and historic Noah's Arks. In fact, Walt originally envisioned both Pirates of the Caribbean and the Haunted Mansion as walkthrough experiences until emerging ride technologies offered higher-capacity ways to cycle guests through experiences. Still, walkthroughs remain across Disney and Universal parks, from sweet asides to special effects spectaculars. Here are some of our favorites... 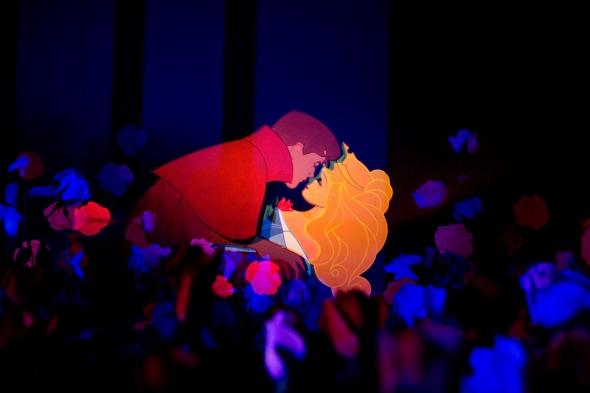 Sleeping Beauty Castle has been the icon of Disneyland since 1955 – four years before Sleeping Beauty would debut in theaters! Still, the castle was one of the first areas where Walt himself saw lost potential. A smaller upper level inside the petite, forced-perspective castle had been used as storage when Walt challenged his designers to find a better use for the space. Before the park's second birthday, a walkthrough opened there, inviting guests to step through highly artistic dioramas retelling the tale of Sleeping Beauty in a style reflecting that of the film's production designer, Eyvind Earle.

The dioramas were redesigned in 1977 (though fans criticized the '77 move away from Earle's style and toward dioramas better fit for the windows of the Emporium), but the entire display closed on October 1, 2001 – some said, as a precautionary measure after the attacks on New York a month earlier. In truth, a mix of safety, operations costs, and accessibility issues probably played a role. In a surprise to fans, the walkthrough re-opened in 2008, with entirely new displays again reflecting Earle's style, but infused with 21st century technology. The walkthrough remains a charming "hidden gem" of Disneyland. 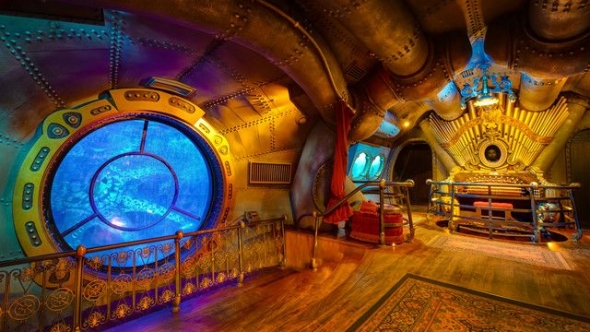 Given that a stark white Tomorrowland echoing the American Space Age would be of little interest to Europeans, designers of Disneyland Paris went back to basics... literally. There, Discoveryland is a golden sea-and-space port inspired by classic 19th century literature. With a Victorian steampunk style reflecting the future as envisioned from the past, the land includes multiple allusions to Jules Verne (once including the Lost Legend: Space Mountain - De la Terre a la Lune). In the bubbling geothermal lagoon outside Space Mountain is docked the Nautilus, Nemo's fabled ship from 20,000 Leagues Under the Sea.

Descending down a spiral staircase, guests appear to cross under the lagoon and into the Nautilus, open for a full walk-through tour that includes the Ballasts Compartment, the Charts Room, the Diving Chamber, the Engine Room, and - most legendary of all - the Grand Salon where a massive shutter porthole opens occasionally to reveal an attack by an Audio-Animatronic giant squid, repelled at the last moment by an electrical charge. 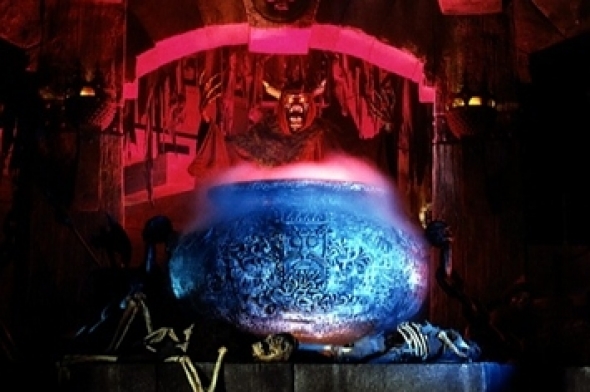 There's perhaps no stranger Disney Parks attraction to have ever been built than Cinderella Castle Mystery Tour, located in Tokyo Disneyland's copy of Magic Kingdom's iconic castle. A guided walkthrough led by a Cast Member, the tour initially promised views into the castle's ballrooms, towers, and galleries until a villanous interruption by the Magic Mirror leads to a spooky descent into the castle's dark corridors and dungeons.

Guests are guided through the Wicked Witch's dark magic laboratory, past shivering suits of armor and ancient torture devices, reanimated skeletons, ghouls from Maleficent's army, and - oddest of all - a finale built around 1985's The Black Cauldron (the film now synonymous with almost killing Disney animation entirely) and its absolutely terrifying villain, the Horned King. The whole experience was expertly chronicled by our friends at Defunctland.

The Mystery Tour was replaced by the much more sedate Cinderella's Fairytale Hall walkthrough, melding dioramas, interactive props, and photo opportunities somewhat like Disneyland's Sleeping Beauty version. However, Tokyo's benefits from taking place in and around the grand space in the castle where Florida guests would expect Cinderella's Royal Table restaurant to be. 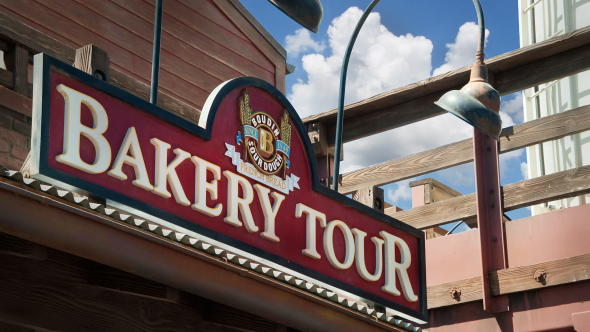 When the Declassified Disaster: Disney California Adventure opened in 2001, executives hoped to position the park as the "grown-up" alternative to Disneyland, keeping the park low on rides and Disney characters, and instead emphasizing pop culture, food, wine, and beer. Take the Pacific Wharf area, themed after San Fransisco's Fisherman's Wharf and Cannery Row. From day one, the park offered a a replica of Boudin's sourdough bread factory (as well as a Mission Tortilla Factory tour) inviting guests to literally step along the factory process from mother dough to finished product. The real, actual bread is then used in bread bowls and sandwiches at the Pacific Wharf Cafe!

The Bakery Tour survived California Adventure's 2012 reopening, and even managed to keep its most beloved feature: free samples on sourdough bread for each guest as they enter! Another holdover from two decades ago? The tour is "hosted" by Colin Mochre and Rosie O'Donnell - C-list stars on ABC at the time the park opened.