11 Disney Parks Music Loops That Will INSTANTLY Bring Back Memories 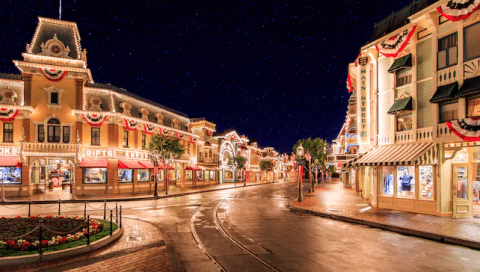 Great care was taken by Disney Imagineers in ensuring that guests stepping into the parks would feel as if they'd been transported. Disney's parks and the themed lands within are cinematic and immersive, meant to make you feel like the star of a story. One of the most exceptional – and underappreciated – details in making those worlds come alive is the music that underscores the experience.

If all the music disappeared from Disney Parks, a day at the park would feel incomplete... like a cake without frosting. Below, we've collected some of our favorite music loops from Disney Parks – the ever-present but almost-subliminal scores that bring lands to life. Take a listen and put these mixes on your playlists for studying, hiking, writing, and daydreaming.

At Disneyland and Magic Kingdom, the promise of leaving our world behind leads to Main Street, U.S.A. – a nostalgic streetscape representing a turn-of-the-century American town. Simplicity is the name of the game here, with ragtime music filling the air.

One listen to this score and you'll imagine eating ice cream cones sitting on the curb, the flashing incandescent bulbs dancing by night, horse-drawn carriages and the honking of 1900s automobiles, and the overwhelming feeling of having arrived back at the happiest place on Earth. That's the transformative power of Disney Parks background music...

Like many towns along Route 66, Radiator Springs developed in the age of the cross-country family road trip, when sedans set out for the West Coast. And like so many towns along "America's Mother Road," it was cut off by the interstate that sliced its way through the country. Of course, by the end of Disney-Pixar's Cars, the town has returned to its mid-century glory with neon signs along its electric streetscape and a fresh stripe of paint down the relaid backtop.

Cars Land is the one place in a Disney Park where you'd expect to hear music from the not-too-distant past. Almost like a jukebox, the land's background loop will leave you "twisting and shouting," believing "it's in his kiss," and "getting your kicks on Route 66." The rock 'n' roll influenced soundtrack that would feel awkward elsewhere instead keeps traffic moving down the street as guests shimmy along.

Still, the land's most spectacular musical moment is a mini-show you won't find in the Times Guide... Each evening precisely at sunset, The Chords' "Sh-Boom" plays throughout the land as its neon lights sizzle to life one-by-one in a mini, orchestrated moment that will send chills down your spine and earns applause from the amazed crowd.

"There's a great, big, beautiful tomorrow shining at the end of every day." That's the promise once made by Tomorrowland, an area seemingly under perpetual transformation. From early days of authentically trying to keep up with American innovation and optimism to today's "Pixarification," it may be true that Tomorrowland's intellectual origins have faded.

But the land's music – zippy, beeping, booping, and bright – will instantly carry you away to a world of swirling rockets, gliding Peoplemovers, sputtering speedway engines, revolving theaters, and more. And yes, you are hearing teases of the familiar (and not-so-familiar) music behind Alien Encounter, Carousel of Progress, If You Had Wings, Timekeeper, and more all wrapped into the score.

There's nothing inherently scary about the slow, jazzy songs that linger across the Hollywood Tower Hotel – songs that might've once drawn couples to the dance floor at the Tip Top Club. But in the shadow of the crackling neon sign and occasional screams, this music loop literally serves to create the perfect atmosphere – mysterious, haunting, and eerie...

Located at Disney California Adventure park, Grizzly Peak is perhaps one of Disney's most beautiful stateside lands. After the unfortunate original "extreme sports in a rundown park" theme from opening day was painted over in 2012, Grizzly Peak emerged as a 1950s National Park of towering evergreens, fire watchtowers, ranger outposts, geysers, flickering lanterns, and misty rivers. It even expanded in 2015 to overtake the formerly military, desert-themed Condor Flats, transforming it (and the Lost Legend: Soarin' Over California) into a High Sierras redtop runway.

Fittingly, the land's score is mellow and natural, yet grand and spectacular. It's cinematic and dramatic, with sweeping strings and flutes that carry guests through the majesty of nature in the shadow of the snow-capped Grizzly Peak itself. Brilliantly, its songs also capture (and in places, interpolate) cues from Soarin's legendary score by Jerry Goldsmith, feeling lighter than air.

The adventurous scores continue on the next page...

How do I add these to my iTunes playlist ?

These are terrific! Thank you very much. I was wondering if happen to have the song from Carousel of Progress. My wife loves that ride and insists on it every time we visit the Magic Kingdom.