Showdown: Why is Disneyland's Fantasmic! So Much Better Than Walt Disney World's? 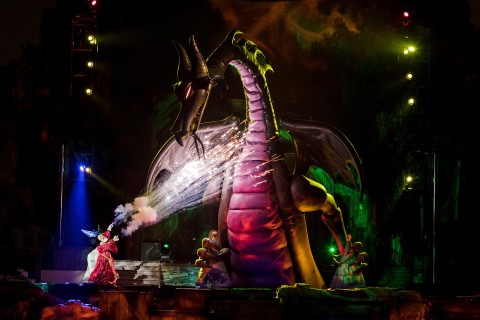 There is something utterly disarming about the beginning of Disney’s Fantasmic. When those lights rise, the chorus sings that familiar word, and Mickey Mouse appears in a fan of light, the world we know melts away. Every child’s eyes widen, and every adult is invited to dream like a child again. Some audiences erupt in cheers while others fall into mesmerized silence, and you can’t help but smile during Mickey’s beautiful and perilous journey into the world of imagination.

Fantasmic first premiered at Disneyland in 1992, a marvel of cutting-edge special effects and entertainment storytelling that solved a significant problem by utilizing the space of the Rivers of America. To this date, it might be one of the best nighttime spectaculars in Disney history, even beating out many of their more resplendent fireworks shows over the years. In 1998, the show was adapted for a specially built arena at Disney’s Hollywood Studios, with a third version premiering at Tokyo DisneySea in 2011 that utilized huge floats and a large version of Mickey’s hat for many of the projections. Finally, in 2017, the Disneyland version was given a complete overhaul with dazzling new effects perfected in the World of Color show, as well as a number of new scenes. Disneyland fans sometimes refer to this version as Fantasmic 2.0, and it’s hard not to say it’s the best one to date. 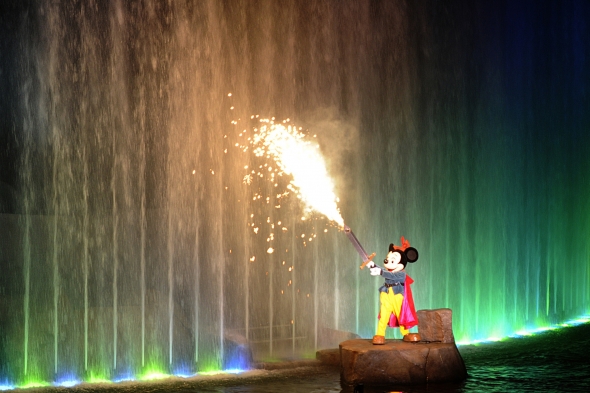 I love all of Disney’s parks, but when it comes to most things Disney, I usually fall firmly in the Walt-Disney-World-is-better camp-- unless we’re talking about The Indiana Jones Adventure or Fantasmic. All versions of the show are excellent in their own right, but despite having the advantages of a custom built stadium, greater freedom for pyrotechnics use, and the considerable resources of Walt Disney World at their disposal, it’s hard not to feel like Walt Disney World's Fantasmic falls a little short of its California counterpart. Bigger is not always better, and while Walt Disney World’s Fantasmic is undeniably grand in scale, there are just a lot of areas where Disneyland seems to have them beat. From crisper choreography to a story that makes more sense, Disneyland’s version edges out Walt Disney World's in almost every way.

We dipped a toe into exploring the differences between Disneyland and Walt Disney World's versions of Fantasmic in our exploration of common misconceptions about Disney’s Hollywood Studios, there is a lot to unpack when you get into the details comparing the shows. For the sake of simplicity, we will leave Tokyo DisneySea’s version out of the discussion since it is significantly different but for some key plot similarities. We’ll also focus most of our analysis on the 2.0 version of Disneyland’s show, with some consideration for its predecessor as well.

What is it about Disneyland’s Fantasmic that edges out it’s Walt Disney World cousin? Let’s take a look at some specific elements to see which show is stronger.

1. The Rivers of America vs. Fantasmic arena

The first key difference between Fantasmic at Disneyland and Walt Disney World is location within the parks. Fantasmic was originally designed for the Rivers of America at Disneyland, and that specificity is obvious whenever the show has been adapted. There may have been logistical issues with trying to bring Fantasmic to the Rivers of America at Disney’s Magic Kingdom— its connection to Florida’s natural waterways would be one problem (a flaming river would probably mean a lot of dead anahingas and gators), and capacity might have been another issue. Whatever the reasons, Disney opted to move Fantasmic to its own private arena at Disney’s Hollywood Studios.

The Walt Disney World version holds two advantages: the stadium setting means that viewers can sit, a major advantage over Disneyland. Also, while the river and space itself may be smaller in the Walt Disney World stadium, the overall scale of the show seems larger, particularly in regards to stunts and fireworks displays.

Despite the stadium advantage, there’s something utterly mesmerizing about the original Rivers of America setting at Disneyland. The use of the Rivers and Tom Sawyer Island as a setting gives the show a distinctly organic feel—like when Mickey Mouse dreams, his dreams take place at Disneyland. While Walt Disney World's version utilizes its mountain stage heavily, in the Disneyland version, the Rivers and the island almost become characters unto themselves, perfectly integrated into the fabric of the show. The Rivers give the show its massive feel, and this becomes especially important since the show utilizes both of the park’s signature boats—the Mark Twain and the sailing ship Columbia—for key scenes.

It’s hard to say which version of the show has the biggest effects. Compared to the original Disneyland version of Fantasmic, the water projections and fireworks in Walt Disney World's version are absolutely massive in comparison. However, Fantasmic 2.0 increased the scale of the show enough that it negates some of the difference.

It cannot be understated what an incredible job Disney did with the new effects for Fantasmic 2.0. The show was already eye-dazzling, but the new effects don’t just add spectacle—they improve the story overall. In the Walt Disney World version, the effects feel like the central focus of much of the show, even if the story doesn’t make as much sense. Part of this discrepancy has to do with the fact that Walt Disney World’s Fantasmic is still an adaptation of the original Disneyland version—there hasn’t been an attempt to update the show yet, which leaves it lagging behind it’s Disneyland cousin. While Walt Disney World's Fantasmic fireworks might be bigger and bolder, the more targeted effects at Disneyland still come out stronger.

Amazing article! In general, I've always preferred the original Disneyland version, although I love some of the upgrades done in the 2.0 version, like the Jungle Book/Lion King merger for the jungle sequence and the new Aladdin scenes (I do miss Peter Pan, though; much more fitting than PoC, plus it's my favorite Disney animated film). The only thing that I think WDW does improve upon is the addition of more classic villains (although I can do without the whole Cave of Wonders sequence). My ideal version of the show would be the original Disneyland version (with Peter Pan), plus the new jungle and Aladdin sequences from 2.0 and the villains montage from WDW.