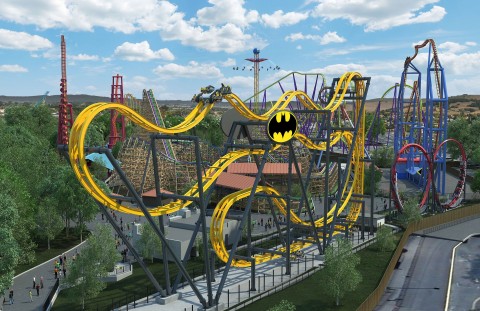 Summer has just begun, and for the thrill junkies among us, there’s no better place for a summer adventure than a theme park. So, whether you’re in search of man-eating dinosaurs, a heart-pounding ride through a dark and foreboding forest, or just looking for enough twists, turns, and drops to make you question your life choices, we have something to make your next summer getaway utterly unforgettable. 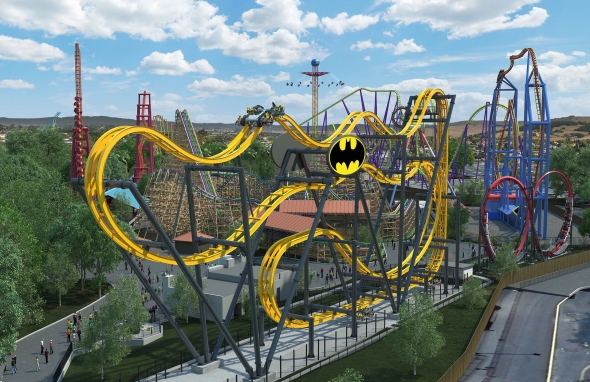 Other than the name, a bright yellow-and-black logo affixed to the side of the track, and a very basic queue building, there’s not much to recommend the theming of Six Flags Discovery Kingdom’s brand-new BATMAN: The Ride. But here, riders will spend too much time spinning backwards, forwards, and upside down to worry whether the landscape flashing before their eyes looks more like Gotham City or Vallejo, California.

There’s no doubt BATMAN packs a punch in its 35-second runtime. After ascending a 120-foot, 90-degree lift hill, the wing vehicles tumble along an I-box track frame that brings its riders closer and closer to the ground. In other words: it’s the kind of thing that needs to be seen to be believed.

Though it bears the same name as the nine other Batman rides scattered around Six Flags’ various theme parks, Discovery Kingdom’s version takes the attraction to new heights (pardon the pun). It’s only the second to be developed as a 4D free-fly coaster since Six Flags Over Texas premiered the ride in 2015, and its face-off seating means that half of all riders will tumble head-over-heels backwards along each raven drop.

At this point, the only thing that might make BATMAN: The Ride even more thrilling—and something we wholeheartedly do not recommend—is chowing down on a Paddle Handle corn dog before you embark on your flight.

Bigger and better things are headed to both Universal Studios Orlando and Hollywood this summer, perhaps none more impressive than the reimagined Jurassic Park water ride currently in development in Los Angeles, California. Fans of the original Jurassic Park: The Ride will remember its slow buildup to a terrifying climax: the lunge of a ravenous Tyrannosaurus rex toward a raftful of riders about to plunge down an 85-foot drop.

Though no opening date has been officially released just yet, Jurassic World: The Ride promises to take that experience to the next level. Instead of one escaped T-rex, riders will have to contend with the fearsome Indominus rex, as well as the aquatic Mosasaurus and Owen Grady’s favorite raptor, Blue.

During a behind-the-scenes peek at the animatronics for the ride, Senior Director and Executive Producer Jon Corfino revealed an intriguing detail:

“We’ve actually created the world’s largest aquarium, where we will see the Mosasaurus up close and personal,” Corfino told Jurassic Outpost. “She’s pretty busy, so we might actually get a little wet in there.”

It's not yet clear how the Mosasaurus will be incorporated in the ride, and the overall format and track layout doesn't seem likely to change very much, but riders should still expect a spine-tingling set of psychological thrills in addition to its infamous drop. And those who may feel nostalgic for the 1990s charm and characters of the original Jurassic Park can head out toward Universal Studios Orlando, where no changes are currently rumored for the classic ride.