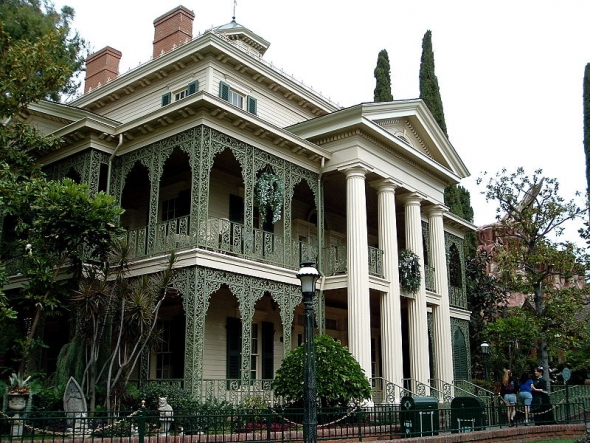 Every Imagineer left their mark on the Disney Parks in some shape or form, and for Toombs, that opportunity arose with the development of the Haunted Mansion in the late 1960s. The attraction was unlike anything else Imagineers had created for Disneyland: a spooky, chill-filled dark ride through an antebellum-era mansion, where guests came face-to-face with all manner of ghostly apparitions and optical illusions en route to their eventual escape. In the séance room, Imagineers envisioned a disembodied medium speaking to riders from within a crystal ball, someone to “call in the spirits” and receive messages from “somewhere beyond.”

Of course, it would take a special sort of person to channel the character of the blue-haired medium, and Disney had just the talent in mind. They turned to the first woman who step into the Imagineering department—Harriet Burns, already well-known for her work on Great Moments with Mr. Lincoln and the Enchanted Tiki Room, among other attractions.

“They had me in a brace,” Burns told Jay Meyer (a model for one of the mansion’s singing graveyard busts). “I was going to be Madame Leota!”

Had it gone off without a hitch, guests might be singing the praises of ‘Madame Harriet’ today. But Burns’ features were too small to work for the floating head, and Imagineer Yale Gracey pivoted to Toombs instead.

“Blaine [Gibson] made a life mask of her face and Yale [Gracey], Wathel [Rogers] and the rest of the team filmed her, crazy makeup and all,” Irvine explained to D23. She was just 15 years old when her mother began the three-day rehearsal process prior to the recording, practicing widening her eyes and enunciating every word of Madame Leota’s spine-tingling script.

When it came time to record the audio for the spirit-like Leota, however, Toombs’ voice was deemed too high-pitched. Instead, the team brought in Eleanor Audley—familiar to Disney fans as Lady Tremaine (Cinderella) and Maleficent (Sleeping Beauty)—to lend her deep, throaty voice to the séance scene. Toombs’ girl-like voice was reserved for the miniature Ghost Hostess who dismissed guests at the end of the ride. To this day, her small, sweet entreaties to “Hurry back!” can still be heard reverberating through the mansion’s final corridor.

Thank you for writing this article, Ashley. Lee Toombs
was my next door neighbor when I was a young girl growing up in the hills of Glendale, California. I have many fond memories of Lee and her daughters.
I remember her telling us about the projects she was working on at Disney. We were so excited when we went to Disneyland, knowing she had helped create some of the characters on the rides. We will always remember the kind and creative person she was. Thank you for keeping her memory alive.