4 Attractions Disney Didn’t Care Enough About to Save 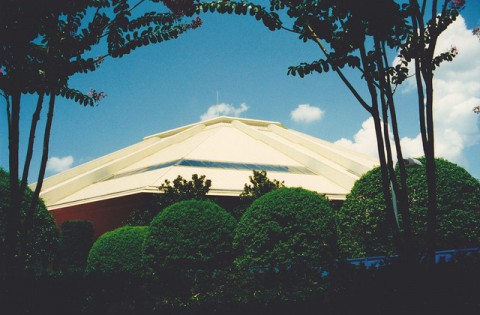 It’s not always clear why Disney decides to move on from certain attractions. Conventional wisdom goes a little like this: XYZ attraction is popular/hailed as a classic/something Walt once touched, looked at, or breathed on, so therefore it should remain a hallmark of the park. When Disney then decides to excise it from the landscape, we can’t help but feel a little betrayed.

Couldn’t Disney see how much we loved Maelstrom? How integral the Great Movie Ride was to the identity of Disney’s Hollywood Studios? How moved we were by the first cheerful refrain of the Sherman Brothers’ beloved ditty, “There’s a Great Big Beautiful Tomorrow”?

The answer is both simpler and more frustrating than we want to hear. At the end of the day, Disney is going to make whatever decision they feel is best for the company. Sometimes, it’s a branding move. Sometimes, it’s because they have something new and shiny up their sleeves. (Sometimes, we can’t help but think, it’s to throw a little chaos into the mix.) 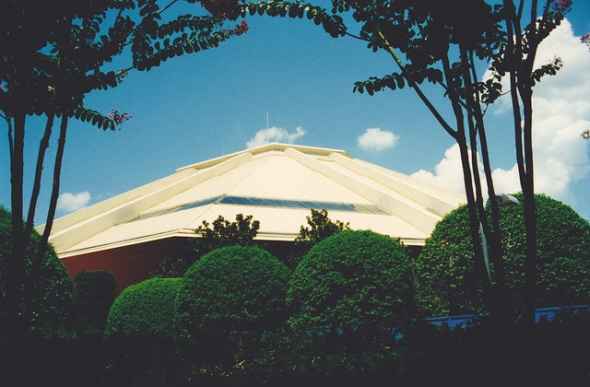 Ask a Disney Parks fan to list their most-missed attractions, and there’s a good chance you’ll find Horizons at the top of it. After all, how many rides truly put Disney’s “If you can dream it, you can do it” ethos to the test?

When it first opened in 1983, exactly one year after EPCOT’s own premiere, Horizons offered guests a satisfying sequel to the already-beloved Carousel of Progress in Magic Kingdom. Visionaries who stepped aboard the Omnimover vehicles were transported to an as-yet unrealized version of the future, in which desert farms, floating underwater cities, and space colonies were not only possible, but common. It was a fascinating blend of cutting-edge technology and innovative edutainment, something that couldn’t have more perfectly summed up the essence of the park’s Future World pavilion.

Ten years later, Horizons’ sponsor declined to renew their contract with Disney. General Electric had poured a decade of funding into the project, and while the ride had established a fanbase and reputation within the park, the company didn’t feel an impetus to extend their sponsorship for another long-term deal. 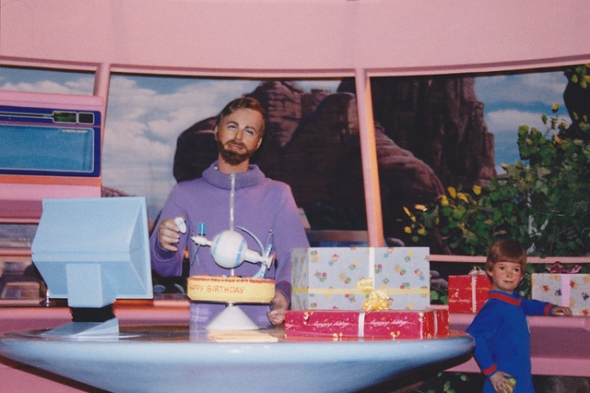 It was bad timing for Disney; in 1995, they were planning to shut down Universe of Energy and World of Motion for much-needed refurbishments. They decided to keep Horizons running—albeit sponsor-less—through the winter of 1999, when it was shuttered and razed to make way for a new space-themed attraction called Mission: SPACE.

Unlike the other attractions on this list, Horizons wasn’t shut down because Disney didn’t recognize its potential or popularity. In addition to the lack of sponsorship, the building reportedly suffered from a plethora of structural problems and was later seemed unsafe for the thousands of guests pouring through Epcot’s entrance. It may have had something to do with a weak foundation, an issue with the soil under the building, roof issues… or even a sinkhole. Whatever the case, its fate was the same. And, while Mission: SPACE has proved a polarizing and thrilling addition to Future World, Disney hasn’t attempted anything close to the more imaginative, elegant Horizons in the two decades since its unfortunate demise. 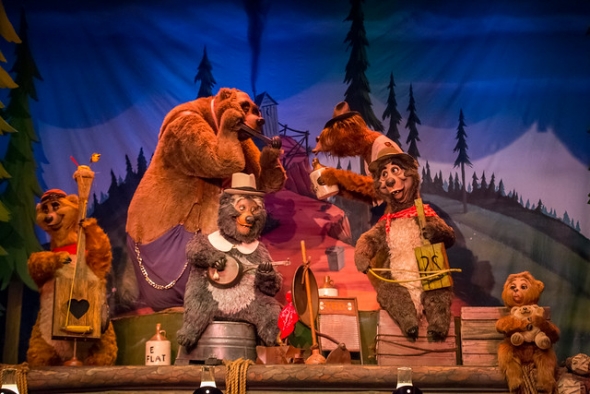 Replaced by: The Many Adventures of Winnie the Pooh

From the moment Henry introduced the dishpan-tapping, mouthharp-playing Five Bear Rugs in 1971, the Country Bear Jamboree appealed to the hearts and imaginations of even the most steel-hearted cynic in the Magic Kingdom. While the 18-critter cast has been a mainstay in Walt Disney World for nearly five decades now, it proved far less popular over its 29-year run in Disneyland.

Exactly what Californian crowds didn’t “get” about the bears isn’t quite clear. Its dwindling popularity may have been directly linked to Disney’s high expectations for the show; over in Orlando, the jamboree was squeezed into a single staging area, but when the attraction was revised and moved out West, the Audio-Animatronics were doubled to fill two separate theaters. With twice the capacity and twice the daily performances, Disney figured they would have no problem keeping up with demand. And they were right… for exactly the wrong reasons.

The twin theaters certainly provided ample room for guests, but the show failed to attract the same crowd-pleasing status it was enjoying in Walt Disney World. The final nail in the coffin was the result of still more creative measures by Disney. In 1986, 15 years after the “E” ticket opened to the public, Disneyland’s original Country Bear Jamboree was replaced by a tackier revue called, at different points, the Country Bear Theater Vacation Jamboree, the Country Bear Vacation Hoe-Down, and the Country Bear Playhouse. 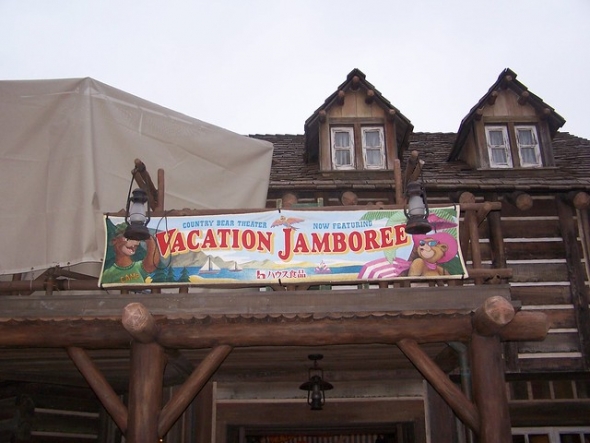 The basic premise was the same, except that the bears now wore bikinis and tacky t-shirts and sang parodies of hits like “California Girls” and “Thank God I’m a Country Boy.” (During the holiday season, their warm-weather attire was swapped for scarves, sweaters, and bedazzled Elvis suits for the Country Bear Christmas Special.) Like any Disney attraction, the new show had its own share of enthusiasts, but there was no denying that the decision to axe the original had been a misstep on Disney’s part.

Over in Walt Disney World, the Vacation Hoe-Down lasted six short years before it permanently closed in 1992 in order to revert to the original Jamboree lineup. Disneyland, meanwhile, kept the show running for another 15 years before closing the entire operation down in the fall of 2001. In its place was another Magic Kingdom staple and more widely-known crowd-pleaser: The Many Adventure of Winnie the Pooh.

Disney may not have been able or willing to keep the Country Bears’ musical dreams alive in California, but that didn’t mean the public had completely given up on the show. Within a year of its closure, Disney debuted the poorly-received The Country Bears (2002), while the original bears continued to charm audiences in Florida and all three iterations of the show lived on in Tokyo Disneyland.