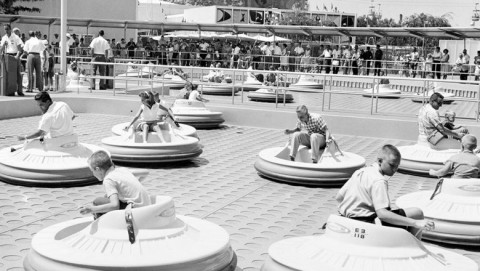 To paraphrase a famous quote, the 1960s were the best of times and the worst of times for The Walt Disney Company. The technology wizards at WED Enterprises earned global acclaim for their work at the 1964 New York World’s Fair. Then, they watched helplessly as their leader, Walt Disney, quickly succumbed to cancer in 1966.

In a span of two years, the original Imagineers reached the pinnacle of their profession, only to see the heart of the company get ripped apart. The work that they did during this era has proven timeless; it genuinely altered the course of theme park history. Let’s take a look back at what WED Enterprises accomplished during this era. Here are the best attractions of the 1960s.

Anyone with any awareness of Disney history knows what the top two attractions will be on this list. A reasonable argument could be made for any of third through sixth entrants to deserve a place on the podium alongside those two iconic attractions.

I’ve chosen to include shows this time in addition to attractions for a couple of reasons. The presentations are unforgettable and influential. Also, Disney built less than 10 true rides during this decade. The list would be thin without them.

Two of the rides built during the 1960s were disappointing. Flying Saucers deserves credit for its ambition, though. Disney tried to construct a giant ride platform scaled up from the same scientific principle as the air hockey table. Cast members have always loved the idea, which is why Disney tried it again roughly 50 years later with Luigi’s Flying Tires.

Both versions failed mightily. Weight distribution issues derailed the underlying mechanics of “floating” ride carts. Some guests were too heavy and negated the floating element, while others were too light to move the cart.

The other failed but somehow still seminal attraction from the 1960s had a lasting impact for different reasons. Adventures Thru Inner Space also explored concepts of scale, only it went the opposite direction. It turned riders into insignificant specks, reducing them in size to microscopic levels. Snowflakes became giant structural bodies relative to the shrunken adventurers. And no one cared. The ride never proved popular and closed after 18 years in operation.

The legacy of Adventures Thru Inner Space is a much different story. This attraction employed a historic ride system, one that’s still popular today. Yes, this ride was the first true Omnimover at Disneyland. Its dedicated transport system guaranteed steady throughput all day. The Omnimover was a byproduct of the 1964 New York World’s Fair, one that was better utilized on an attraction that came a couple of years later.

The recurring theme throughout this list is that Disney’s diligent work in preparation for the World’s Fair paid dividends for many years afterward. At first, Great Moments with Mr. Lincoln was the centerpiece of the State of Illinois Pavilion at the exhibition. As part of the agreement, Disney would later have the attraction transferred to Disneyland, where it’s remained since July of 1965.

This attraction became the talk of the World’s Fair due to its groundbreaking technology. Audio-Animatronics (AA) were an unknown technology at the time. To gullible onlookers, it appeared as if Abraham Lincoln had come back to life. Sure, that seems like an exaggeration now, but the hyper-realistic movements of the Lincoln AA seemed like wizardry to people in the early 1960s.

Half a century later, it’s Lincoln’s words that resonate with modern audiences. In an age of true robotics, his gestures seem a bit quaint.