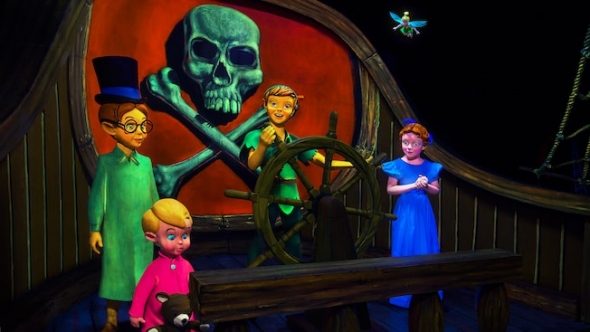 It’s rare to find an attraction at Walt Disney World that feels like it was plucked straight from Disneyland circa 1955. Most try to do something more bold, taking full opportunity of the space afforded to the Orlando park and the updated technology present in the 1970s and beyond that was unheard of when Disneyland first opened. Peter Pan’s Flight is, in a way, a throwback – a kind of homage to how attractions used to be.

Walt Disney World doesn’t have too many attractions with that same simple aesthetic. The flying ships that act as vehicles, the simple lighting effects to simulate the streets of London in tiny form down below, the brilliant overhead track that’s concealed enough to make you feel like you’re just in the smallest bit of danger – the ride is simple thrills that delight all ages.

It is the perfect bridge between Disneyland and Walt Disney World – a handing-of-the-baton from one style of Imagineering to another. It’s rare to find someone who doesn’t love Peter Pan’s Flight, even if they can’t stand the hour-long wait for it. It’s not a headliner in the same way Pirates of the Caribbean or the Haunted Mansion are, but it’s not a tertiary attraction either. It’s the rare must-do attraction that doesn’t have anything particularly special about it, and which you can find a handful of approximations of at Disneyland, but you can’t picture Walt Disney World without it.

Why does the Riverboat exist? It doesn’t go anywhere in particular. It doesn’t have a particularly interesting show to put on for you. There aren’t any must-see effects, and there isn’t a story being told. Yet, it’s hard to picture the Rivers of America without that large steamship making its voyage.

When you experience the Liberty Square Riverboat for the first time, it almost feels like you’ve discovered a secret. The way the ride ventures back behind Big Thunder Mountain Railroad and even beyond the back end of Tom Sawyer Island gives you a sense of real exploration – like it’s a real steamship navigating a real river, with the real Samuel Clemens shouting out instructions.

It takes up an awful lot of space for an attraction that has no story and exists primarily to offer incredible photo opportunities of other rides. And yet, it’s one of those attractions that Disney needs to operate in order to give guests a balanced experience in the parks. It’s not enough to ride thrill ride after thrill ride. Sometimes, you need something more leisurely.

Yes, it takes up a lot of space, but it’s space that’s well-used. You can’t picture Disney closing down the Riverboat permanently, but if they did, it’s cause for protest.

I'm a Disneyland person and not a Disney World person so I don't know some of those attractions but for me a list like that would probably be longer than 5 and would have to include Space Mountain, It's A Small World, Pirates Of The Caribbean and The Haunted Mansion.