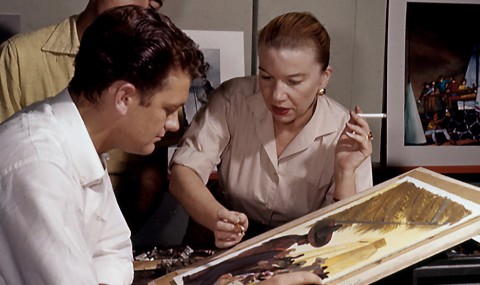 It’s easy to talk in superlatives about the incredible women who conceived, developed, and breathed life into the Disney Parks, but we do so for good reason. Artists, designers, costumers, and Imagineers like Mary Blair, Harriet Burns, Leota Thomas Toombs, and Alice Davis (among many others) not only helped define some of the parks’ classic attractions, but pioneered new art styles and technologies in their quest to help Walt realize his dream of creating the ‘Happiest Place on Earth.’

Another such figure in Disney history is production designer and artist Dorothea Holt Redmond. You may recognize her work in Walt Disney World’s Cinderella Castle and Disneyland’s Plaza Inn, but the projects that she is perhaps best-known for are those that are least accessible to the general public today. Described by Imagineer Marty Sklar as a “brilliant watercolorist” whose work was so immersive that “we immediately believed we had already visited these magic places,” here’s the story of how she rose to prominence in the motion-picture and theme park industries during her decorated 36-year career.

Nearly 30 years before Dorothea Redmond (née Holt) brought her lush conceptual illustrations to the Disney Parks, she gained a considerable amount of notoriety as the first woman to work in motion-picture production design. At 28 years old, Redmond had already completed her Bachelor of Fine Arts at the University of Southern California and a supplemental Illustration degree from the Art Center School in downtown Los Angeles. She was well-versed in architecture and interior design and had an eye for scene-setting that rivaled that of anyone in the business.

When she was brought on board by Selznick International Production in 1938, however, her male coworkers found it difficult to appreciate her exceptional education and natural talent. According to comments that Redmond’s daughter, Lynne Jackson, gave the Los Angeles Times in 2009, those colleagues were so incensed by her presence in the studio that they soon insisted she separate herself from them in a walled-off work space.

“It was really difficult when she started out in motion pictures,” Redmond’s son, Lee Redmond, added, “but my mother didn’t take crap from anybody. She’d walk into male-dominated places and deal with all these snide comments because she was better than anyone else in the room.”

Despite the undeniable challenge of dealing with workplace discrimination, Redmond delivered on her immense potential. She worked in tandem with director Alfred Hitchcock and his art director and cameraman to create scenes that properly conveyed the German Expressionist aesthetic Hitchcock wanted to depict on-screen. Specifically, Lee said, she used the contrast of light and shadow to heighten the mood of a scene—something that appealed to Hitchcock’s own dramatic style.

5 Ghoulish Disney Ghost Stories You May Wish You Didn't Know!