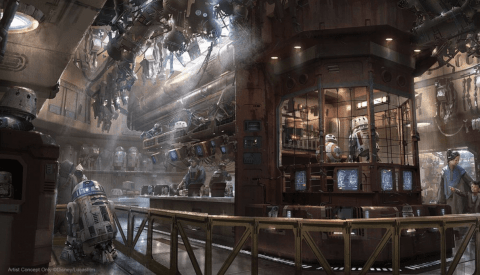 There’s no doubt that Star Wars: Galaxy’s Edge is one of the most exciting developments the Disney Parks have seen over the last decade-plus. Its bicoastal opening this spring and fall is expected to draw record crowds, both to indulge in a hearty dose of science fiction nostalgia and to marvel over the latest technological advances implemented in the park’s various retail outlets, food stalls, and attractions.

The opening of Galaxy’s Edge feels long overdue for the company. Black Spire Outpost, as the Batuu-based alien hideout has been named, is far from the first fully-immersive theme park area to welcome visitors. (It’s not even the first “alien planet” to do so, for that matter.) That particular bridge was crossed nearly ten years ago when Universal Orlando Resort admitted its first batch of aspiring witches and wizards-in-training to the intricately-replicated Hogsmeade Village and Hogwarts Castle, both of which were neatly tucked into the topmost corner of Islands of Adventure in 2010.

Since then, the Potterhead-tailored sections of Universal’s three parks in Florida, California, and Japan have only continued to expand, most notably with the addition of Diagon Alley in Orlando during the summer of 2014. With dynamic shopping experiences, live entertainment, responsive Audio-Animatronics, immensely popular confections (as any employee serving up a frothy cup of Butterbeer can attest), and blending 2D and 3D attractions, Universal all but left Disney in the dust—pear-sweetened Night Blossoms and floating Pandoran mountains notwithstanding.

That may change when Black Spire Outpost embraces its first Earth-based travelers this summer. While Disney missed the boat with J.K. Rowling’s beloved series, they have the opportunity to set themselves apart once more with a veritable galaxy of characters and stories both familiar and brand-new. They’ve also had nine years to observe the growth and success of the Wizarding World of Harry Potter, right down to the tech-enhanced steam engines and goblin-managed currency. What else might they borrow from Universal in hopes of pulling ahead of the competition? Let’s take a closer look. 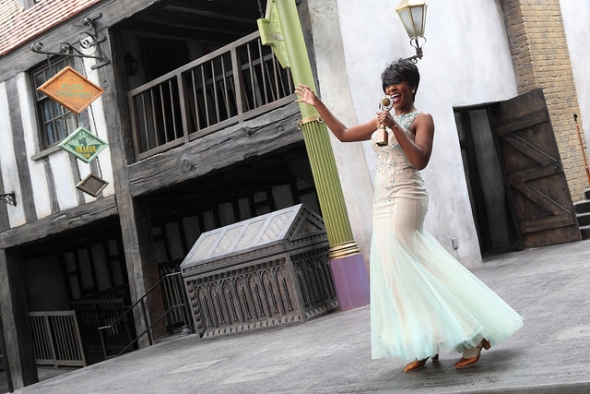 Imagine stepping through the portal into Diagon Alley and coming face-to-face with Hagrid and Harry as they tick items off of Hogwarts’ recommended school supplies list. Or entering Hogwarts Castle to have a friendly chat with Albus Dumbledore. Or knocking on the door of 12 Grimmauld Place and being greeted by Sirius Black or another member of the Order of the Phoenix.

There are several reasons why the Wizarding World of Harry Potter doesn’t offer the standard face character meet-and-greets that can be found in almost every other corner of Universal Studios. The first and most pertinent reason is that J.K. Rowling allegedly refused to give Universal full rights to the most iconic characters in her invented universe—a logical decision, especially given that the eight-part film series had not yet reached its conclusion when the park first opened.

The second, perhaps more intriguing reason, is that stationary meet-and-greets take something away from the immersive nature of Universal’s carefully-crafted landscape. Whether this was a deliberate choice is unclear, and there’s no doubt that the Wizarding World caters to fans. But it does less to service those fans as mindless, merch-grabbing consumers and more to make them feel as though they’re part of Harry’s story. Instead of lining up to greet Harry, Hermione, and Ron, guests are invited to have a casual chat with Ernie Prang (the daring driver of the Express), exchange dollars for Galleons under the watchful gaze of a responsive goblin animatronic, and most exciting of all, enjoy a lengthy wand-picking ceremony with the thoughtful Garrick Ollivander. 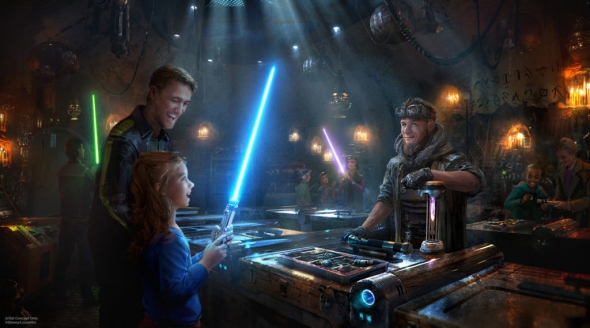 With regard to the development of Galaxy’s Edge, there have been some hints that Disney may adopt a similar strategy for future character interactions. Up until now, both in Disneyland’s Tomorrowland and Walt Disney World’s Hollywood Studios, visitors have been limited to fairly standard, fixed-point interactions with Darth Vader, Chewbacca, Boba Fett, Kylo Ren, Rey, and BB-8. (A noted exception is Captain Phasma and the Stormtroopers, both of whom frequently roam the parks.) Recent reports have indicated that this will not be the case in Black Spire Outpost, where more obscure characters will make up the bulk of character interactions with curious guests.

The current lineup includes Audio-Animatronic black-market trader Dok-Ondar, bounty hunter Harkos, and anonymous Resistance fighters and First Order sympathizers… all of whom promise varied and interesting engagements as parkgoers are invited to not only immerse themselves in Star Wars lore, but actively participate in a dynamic and still-unfinished story.