Davis goes to work for Walt 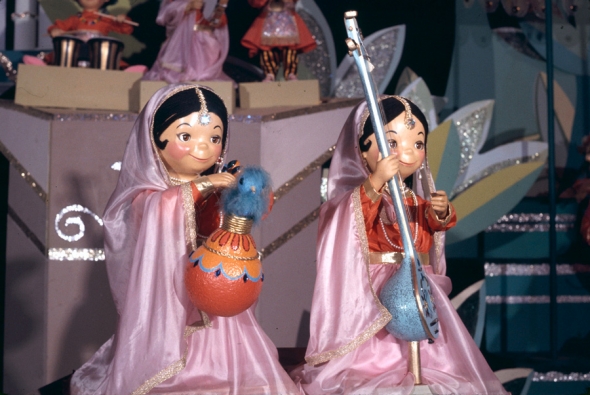 The dolls for “it’s a small world” may have been far smaller in scale than the full-sized Aurora costume Davis created for Stanley, but the project proved far more complex and time-consuming. At the rate of $25 a day (half of what the employees under Davis were already making), she was given just one year to research, design, and test the costume pieces for roughly 300 dolls.

The premise of the ride—then slated for a run at the 1964-65 New York World’s Fair before it eventually received a permanent installation at Disneyland—was that of a musical melting pot. Miniature dolls were to depict children from around the globe, each outfitted in the costumes of their own countries and singing a song of universal friendliness and harmony. It was an ambitious goal, to be sure, and one that had already hit a few snags.

At the outset of the job, Davis told The “E” Ticket, no one had approached Walt to discuss the ethnicities of the dolls. “All you have to do is look at a picture of people from that country and make the skin that color,” Davis said. In addition to providing appropriately-shaded swatches for the dolls’ skin, she also assisted a team of four women in putting together costume patterns for the 26 countries represented in the attraction. 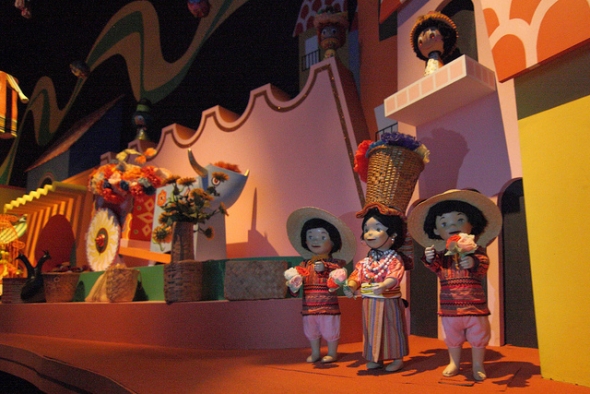 While Davis was later assigned a crew of quality control checkers for her animatronic creations in “it’s a small world” and Pirates of the Caribbean at Disneyland, she was forced to jump through a few hoops after taking her dolls to New York for a pre-World’s Fair test.

“The Union would not allow me to touch any of the costumes—no fabric of anything,” she recalled. “I just had to stand there and tell people how to do things but I couldn’t touch anything. Some of them would purposely not get the job done to see if I would break and touch the fabric. […] I’d wait till they left and I’d take the things home that needed to be done that I knew they wouldn’t do. I’d stay up all night working on the costumes and I’d have them finished and on the hangers by morning. They never figured out how so much got done.”

Davis didn’t just have her eye on a successful run at the World’s Fair, however. Like Walt, she was also thinking about the future of the Disney Parks and the enormous challenge of keeping its signature attractions looking fresh and new. To this end, she told Disney that they would need to consider keeping duplicate costumes on-hand for their animatronics; the constant repeated motions often accelerated the deterioration of the fabric, and it would take too long to make repairs or, worse, temporarily shut down the rides in order to find archived patterns and pull the materials to make entirely new sets of clothes. 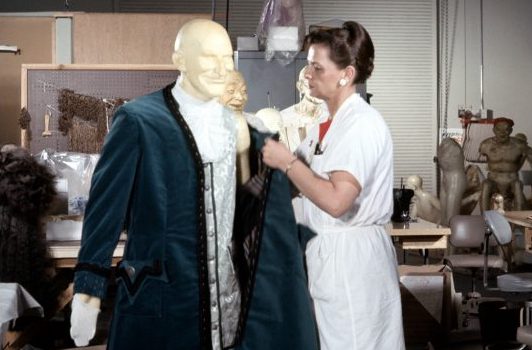 Davis wouldn’t get the opportunity to prove her point until she accepted her second assignment from Disney: outfitting the swashbuckling pirates, terrified townspeople, and slap-happy animatronic drunks that populated an upcoming attraction called Pirates of the Caribbean. It was the biggest undertaking of Davis’ career to date.

As with “it’s a small world,” Pirates of the Caribbean took its passengers on an elaborate cruise, albeit one somewhat removed from the smiling, singing dolls and colorful landscapes featured in “the Happiest cruise that ever sailed ‘round the world.” Initially designed as a walkthrough museum of wax figures, the final form of the Pirates attraction introduced Disneyland guests to an eclectic crew of cursed, violent thieves who attacked a fort, pillaged and burned a seaside port, and made off with a king’s ransom of gold and jewels.

By the time it debuted in March 1967 (a mere three months following Walt’s death in 1966), theme park visitors had already glimpsed the wonders of Audio-Animatronics in the stately Abraham Lincoln and charming Tiki birds, but never before had they seen such a wide range of moving characters. The pirates that populated the shores of the Caribbean city were by turns humorous and menacing: waving their swords, chasing after villagers, toasting their compatriots, napping with farm animals, blasting cannons and firing pistols, pulling faces behind the bars of the local jail, and debating prices during a rather questionable auction for young, scared brides.

Although Pirates of the Caribbean only featured 70-odd Audio-Animatronics to the ~300 moving figures of “it’s a small world,” Davis’ job was complicated by the figures’ life-sized frames—frames with all kinds of pipes, wires, and tubes protruding in a most un-humanlike fashion. Davis couldn’t make “normal” costumes for the figures, that is, costumes that any living person would be able to button, snap, or pull over their heads. Instead, she was forced to adapt each 17th- and 18th-century pattern to fit the action that the Audio-Animatronic needed to repeat: a corset to fit the pipe that comprised the Redhead’s torso, double-lined coats to prevent the pirates from wearing out their clothes quickly, a “onesie” garment to disguise the fact that the pirate seen hugging the cannon had no visible chest.