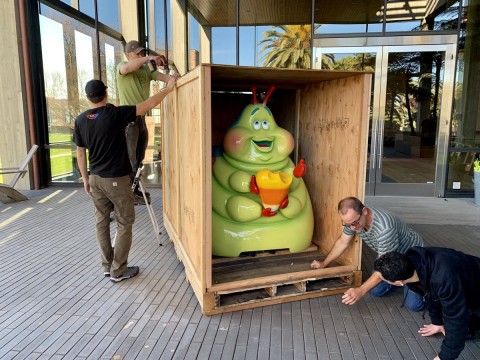 Ever wonder what happens to the discarded ride vehicles and Audio-Animatronics of defunct theme park attractions? Some may find a home in the recycling bin, while more iconic pieces might be sold to collectors or shipped off to the studio’s archives for cataloguing and preservation. Still others, like the unfortunate Audio-Animatronics of America Sings, are stripped down to their nuts and bolts in order to be repurposed for current or future attractions.

Relatively few pieces of theme park history ever make it beyond the berms of Disneyland and Walt Disney World, but there are a few remote places where you can find genuine articles from days gone by. How many of these have you spotted so far? 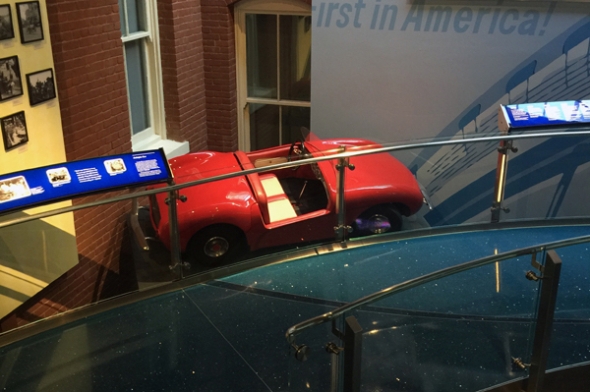 For those of us who weren’t around when Walt’s original park opened to the public in the summer of 1955, it’s a rare and special treat to see some of the retired attractions up close. Although you can find a few fascinating bits of Disney Parks history at the Disney Gallery on Main Street, U.S.A., a far richer history awaits those who make the trek to the Walt Disney Family Museum in the Presidio of San Francisco.

The museum, founded in 2009 by Walt’s daughter, Diane Disney Miller, is unparalleled in its trove of artifacts from Walt’s life and career. Perhaps one of the coolest parts of the museum’s permanent galleries is the room devoted to the development of Disneyland, including a working Audio-Animatronic bird from the Enchanted Tiki Room and an intricate, 14-foot diameter model of Disneyland’s most iconic attractions.

As museum guests make their way from Walt’s miniatures display to the Griffith Park Carousel bench to the model of Disneyland, they’ll also find a vintage Autopia ride vehicle among the park memorabilia. Painted cherry-red and in pristine, if not perfect condition, the ride vehicle was donated to the Walt Disney Family Museum by Christopher Disney Miller and dates back to Disneyland’s Opening Day. Although Autopia has since undergone many tweaks and revisions in order to make it a safer and more enjoyable experience for underage and licensed drivers alike, it’s fantastic to get a peek at the beautiful models Disney used in the park’s early days. 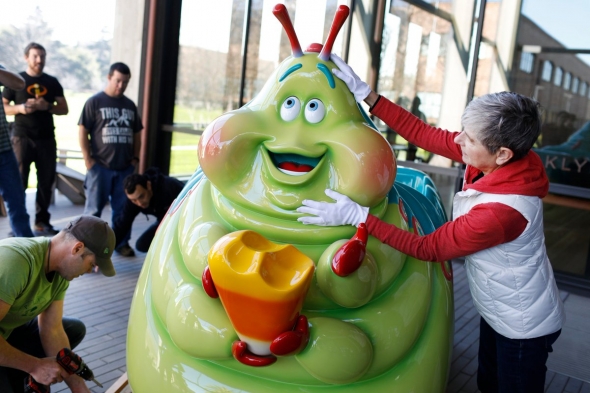 In September 2018, Disney California Adventure’s “a bug’s land” permanently shuttered to make way for an Avengers-themed land. During its 16-year lifespan at the Disneyland Resort, the area predominately catered to young children with water-based play areas and a variety of slow, kid-friendly attractions like Francis’ Ladybug Boogie, Tuck and Roll’s Drive ‘Em Buggies, and Flik’s Flyers.

When Disney began tearing down “a bug’s land” last year, it wasn’t immediately clear where the rides would end up. There don’t appear to be any immediate plans for Francis’ ladybug spinners, nor Tuck and Roll’s pill bug bumper vehicles, but recent rumors have pointed toward a possible retheming for Flik’s airborne flyers as the suspiciously similar Inside Out Emotional Whirlwind attraction is scheduled to debut sometime in 2019.

As for Heimlich’s Chew Chew Train—a slow-moving train ride through Heimlich’s various oversized snacks—part of the attraction made its way north to the Brooklyn Building of Pixar Studios’ campus in Emeryville, Calif. While visitors can no longer journey with the caterpillar as he samples an array of candy, cookies, fruits, and vegetables, they can still snap a photo with the candy corn-munching bug in his new (and permanent) home.