Behind the Ride: Pooh's Hunny Hunt 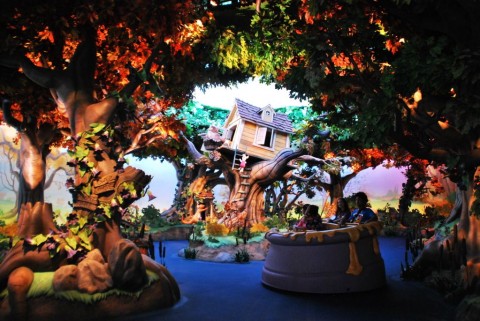 A visit to Hundred Acre Wood appeals to children of all ages. Riding one of the many Winnie the Pooh attractions in the world is something that appeals more to the kids, though. Don't get me wrong. The characters of Pooh Corner are wonderful, and the various Disney recreations of A.A. Milne's realm are lovely. They just aren't very modern. One colossal exception exists, though. Let's go behind the ride to learn about Pooh’s Hunny Hunt, one of the most innovative and expensive attractions ever made. 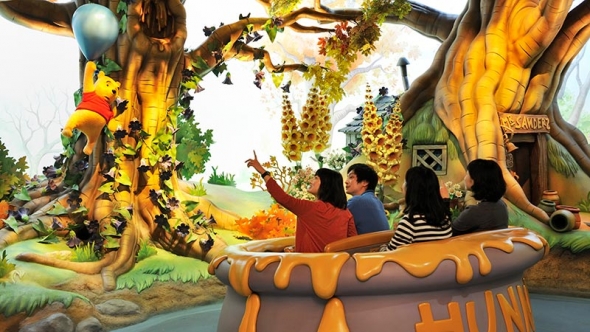 Image: DisneyWalt Disney commemorated the opening of Fantasyland with this proclamation:

“Here is a land of imagination, hopes and dreams. In this timeless land of enchantment the age of chivalry, magic and make-believe are reborn and fairy tales come true.”

At Tokyo Disneyland’s version of Fantasyland, Imagineers constructed a ride that featured not one but two of the most remarkable innovations in theme park history. One of them was so far ahead of its time that Walt Disney World didn’t get the same technology until 20 years later!

I’m speaking of the trackless dark ride system. In North America, your only familiarity with this sort of ride stems from Disney California Adventure. That park hosts Luigi’s Rollickin’ Roadsters, where adorable vehicles styled like Cars “dance” in a designated area. Since that attraction was a reboot of a prior one, it’s only a modest example of the premise.

Since 2000, Pooh’s Hunny Hunt has stood apart as the originator of the trackless ride. Imagineers wanted to build an E-ticket attraction that would signify the park’s transition into the 21st century. Their idea revolutionized the industry.

Image: DisneyWhen Disneyland debuted in 1955, Walt Disney and his Imagineers designed rides the same way that they produced movies. They built set pieces where guests would “enter” the film’s story. Ride carts provided the means of transporting them from set to set. Even then, the world’s first theme park developers understood that theirs was an imperfect solution. Let’s use a real-world example to demonstrate.

Please think about the attic sequence on Haunted Mansion. How often do you spin your head around to catch as many details as possible during your brief journey through this section? What do you lack? The answer is a close-up view of every element.

Cast members take pride in the special touches that they add to the attractions even though many of them go largely unseen. Standard ride tracks are immutable. They can only follow a set path from start to finish. As such, they provided a limited view of an attraction’s various sets.

Image: DisneyWith Pooh’s Hunny Hunt, Imagineers opened a 360-degree perspective. For the first time ever, a ride vehicle could travel anywhere on the ride set. They accomplished this feat by taking the track system of the past and modernizing it.

Trackless rides throw out conventional theme park design. Most of the rides that you know are wired. A pathway in the ground tells the vehicle which way it needs to go. Whether the system physically pulls the ride cart or the vehicle powers itself, it still follows that distinct wired path.

A trackless system has no such path. Don't get me wrong. It still has a predictable pattern of movement. The permutations of travel paths are exponentially larger, though. Pooh’s Hunny Hunt was built using WiFi technology to control its direction. It even throws in some RFID recognition. You don’t need to understand how these systems work, though. The outcome is the only thing that matters. 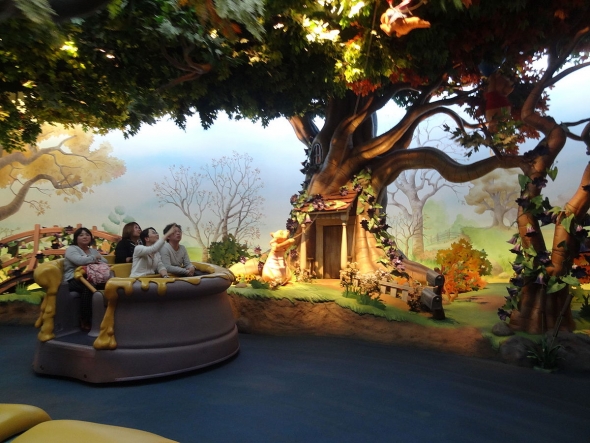 Image: DisneyThe ride carts are smart on trackless attractions. They communicate back and forth with a series of computers to identify a path. It’s akin to how Space Mountain employs sensors to recognize where coaster carts are on the track.  The difference is that Space Mountain remains on that single path.

Trackless rides have extreme maneuverability. They’re capable of going anywhere that’s deemed “inbounds” by the system. Obviously, you won’t crash into a wall or anything, but when you see something on a set on Pooh’s Hunny Hunt, you may move straight toward it.

Each five-seat honey pot is capable of independent movement. Going back to Haunted Mansion, your Doom Buggy will go to the same place. On Pooh’s Hunny Hunt, three different honey pots leave at once. Each of them will take a different path to explore the magical realm of Hundred Acre Wood.

Since this is first generation technology, the total number of different ride experiences on Pooh’s Hunny Hunt is just a handful, arguably as few as three. But the genius of the design opened limitless possibilities in ride design, something we’re only exploring fully today.

TAKE 2: These Projects Got Downgraded In Development. Do You Prefer the "Before" or "After"?