Like most tourist attractions, Gatorland was hit hard by the introduction of the interstate that began slicing its way through the country in the late 1960s. True to the depiction of the mid-century phenomena shown in Cars, the new route through the U.S. essentially cut roadside attractions off from the bulk of travelers. While restaurants and gas stations moved to new, interstate-adjacent off-ramps, attractions were now off-the-beaten-path, requiring a shift in marketing.

Believe it or not, the opening of Walt Disney World in 1971 wasn't a painful blow to Gatorland. In fact, the opening of Magic Kingdom lead to a massive spike in Floridian tourism across the board. The real killer? 1973's SeaWorld – a well marketed animal-park with the clout to recieve direct exit ramps from the interstate, and whose focus was on more than just displaying animals. Following SeaWorld's lead, Gatorland pivoted to refocus on entertainment – a move that differentiated it from Florida's countless "Springs" and wildlife parks.

Click and expand for a larger and more detailed view. Image: Gatorland

Under the leadership of Owen Godwin's son Frank, Gatorland doubled in size though the '70s, '80s, and '90s.

Today under the care of his son-in-law, Mark McHugh, Gatorland isn't just a theme park – it's a family business. Kept alive in trying times by smart strategy and some real luck, the park has evolved and changed with the times into a professional theme park of its own... and a one-of-a-kind one.

Today, a visit to Gatorland involves countless, up-close animal interactions with skinks, snakes, and gators; feeding birds in the Very Merry Aviary; watching gators hatch in the Nursury, or grow up in the Breeding Marsh. There are exhibits of snakes, tortoises, tropical birds, crocodiles, even emus; trains to ride, splash pads, and more. But if you've taken a family trip to Florida in the last sixty years, it's probably one of these seven signature Gatorland experiences you just can't forget... 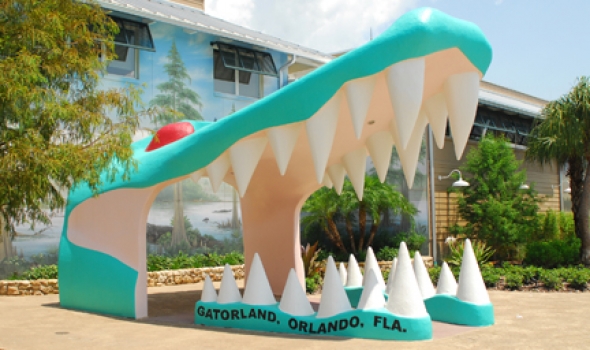 When you're ready to face the fearsome, Floridian wildlife, there's still just one way to get to them... by walking directly into an alligator's mouth.

A devastating fire in 2006 leveled Gatorland's entry building (including its gift shop and administrative offices). Though the fire did claim the lives of two crocodiles and an exotic snake penned near the gift shop, no humans were hurt. The park closed for three weeks to assess the damage, then re-opened to the public. An entirely new entrance building now greets guests, so '90s visitors may have a bit of disorientation upon entry... But the fifteen-foot alligator jaws continue to be an architectural icon, photo opportunity, and grand entrance experience few parks can beat. 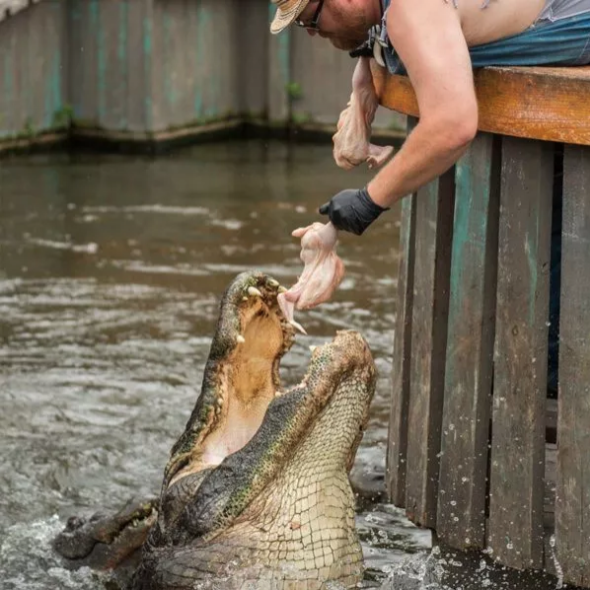 Perhaps the most famous "show" at Gatorland is the daily feeding of the gators in the park's central enclosure. Handled via adventurous employees, this captivating experience involved enormous alligators leaping up to four feet out of the water to snatch (store-bought) chickens from the hands of feeders and – for the big jumps – from wires suspended over the lagoon.

Like all of Gatorland's shows, what started as pure roadside kitsch has evolved into a showcase and explanation of the power of these creatures and their incredible survival skills.

Gatorland's Swamp Walk  originally opened in 1978, preserving some of the "real" Florida in the increasingly sheltered Orlando area. In fact, the half-mile trek through the swamp might be the closest most tourists get to seeing the true untamed wilderness of the state. Despite the "luxuries" of an elevated wooden boardwalk and (distinctly un-Disney) minimal wooden guard rails, you're literally walking into the wilderness...

Headwaters for the Florida Everglades, the marshes that guests pass through don't just contained real, actual, wild animals in their native  habitat; guests are also passing through acres of magnolia trees and cypress trees – some over 200 years older than the United States.