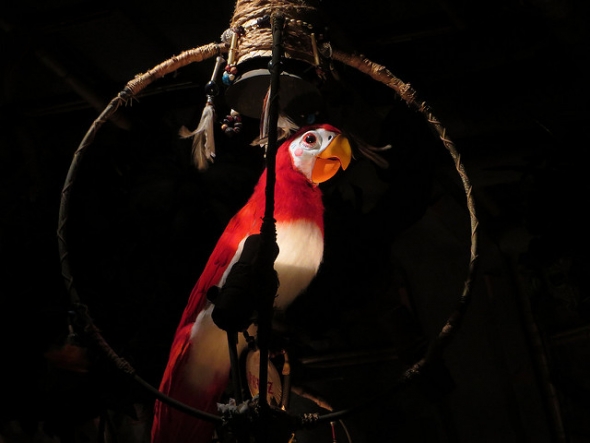 By the 1960s, there were far more exciting projects in the works at Disneyland. A new strain of robotics, termed “Audio-Animatronics,” was finally nearing completion, and it had huge ramifications for the future of the company’s films and attractions.

As with everything he did, Walt had grand visions for the new technology. He fantasized about an early version of the Hall of Presidents and commissioned an early working model of Abraham Lincoln’s head. The Imagineers, meanwhile, kept more modest goals in mind. Well before a full-bodied version of Lincoln would debut at the World’s Fair or receive a permanent installation in Disneyland’s Town Square, Magic Kingdom’s Town Square, and Magic Kingdom’s Liberty Square, Disney’s team came up with the idea of an Audio-Animatronic populated restaurant.

Birds would sway and sing as guests relaxed in the tropical ambience of the “Enchanted Tiki and Bird Room featuring Disney’s Legends of the Enchanted Tiki Show”… but it quickly became apparent that both the name of the restaurant and the concept itself were far too complicated to work as smoothly as Walt would have liked.

The idea gradually took shape as a 16-minute show adjacent to the Tahitian Terrace, where a witty foursome of internationally-based macaws would introduce the audience to a wider cast of animated characters. It was easier said than done. Among the many problems the avian Audio-Animatronics ran into—staying cool in the Anaheim heat and syncing up with the lyrics to the Sherman Brothers’ “The Tiki Tiki Tiki Room,” for instance—was the issue of their plumage.

The problem in a nutshell: Although the animatronics were programmed to replicate the natural inhalation and exhalation patterns of live birds, the synthetic feathers began to crumple against their frames every time they took a breath.

This is where Burns came in. As a figure finisher, she gathered inspiration from the materials around her (including Walt’s own brushed wool sweater) and played around with various dyes until she found something that looked natural and long-lasting—and not, in her words, “like mange.” Her successful fixes for the birds led to work on Mary Poppins (1964), where she helped engineer the tiny robin that perched on Julie Andrews’ finger during “A Spoonful of Sugar.” The creation of this animatronic proved far more difficult than simply sourcing synthetic material, as Burns ended up having to comp some Disneyland tickets in exchange for rare 71-year-old, arsenic-preserved robin feathers from the Natural History Museum.

Animating the first president of Disneyland 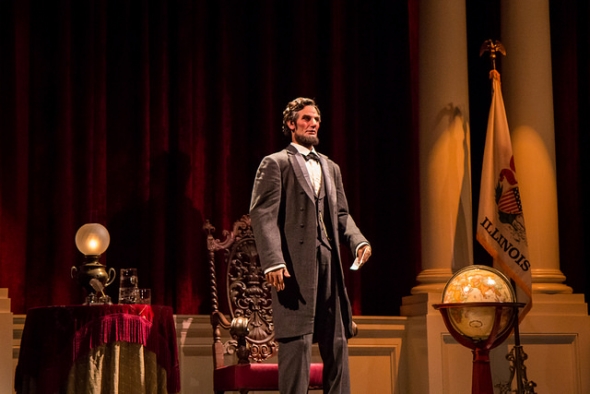 Walt’s dream of seeing the U.S. presidents come to life began to take a more concrete shape in the mid-60s. A full year before it was replicated and installed in its semi-permanent station in Disneyland’s Opera House, a life-size Audio-Animatronic of president Abraham Lincoln was created for the 1964-65 New York World’s Fair as part of a show called Great Moments with Mr. Lincoln. The crowds had never seen its equal.

The reasons for developing an animatronic president were trifold. First, Walt claimed there was not enough depth and authenticity in paintings and speeches, no matter how famous or well-executed. A living, speaking sculpture could pay more accurate homage than a stationary piece of art. Second, it was a far more convincing medium to express some of Lincoln’s lofty ideas and historical messages. Reading (silently) a transcript of the Gettysburg Address would pale in comparison to hearing it from the lips of Honest Abe himself—that is, as close an approximation to Abe as you could reasonably get. And third, as Imagineers Marty Sklar and John Hench put it, a robot could provide a more consistent portrayal day-to-day than any living actor.

Figuring out how to construct such a convincing, human-like Audio-Animatronic was a challenge that none of the Imagineers had quite faced before. Certainly, it would take more labor and creativity than had been required to populate the whole of the Jungle Cruise and the Enchanted Tiki Room combined. A human animatronic would need to have more fluid movements than a singing macaw and a wider range of motion than the hippos that wagged their ears as they bobbed up and down the river. It would need to not only evoke the image of the person it was patterned after, but bring that person to life—similar to the famous wax figures of Madame Tussauds, only far more animated.

As Gibson sculpted a model of Lincoln’s head from the former president’s life mask, Rogers recorded complex movements via the control harness, Bob Gurr and Roger Broggie fine-tuned the mechanisms inside the animatronic, and Marc Davis helped flesh out the attraction, Burr was saddled with the responsibility of figuring out the skin. Like the birds’ feathers in the Enchanted Tiki Room, she needed a synthetic material that wouldn’t look unrealistic or rapidly decay with frequent, repeated movement. In an interview with Scott Wolf of Mouse Clubhouse, Burns admitted that she got pretty creative as she tried to develop a working skin for the president, experimenting with everything from fiberglass to latex and even resorting to using a home fryer, in which she would play around with various mixtures. In the end, she helped devise a vinyl plastisol-based substance called “Duraflex,” something close enough to real human skin that it could both flex and compress without cracking and, in doing so, channel Lincoln’s expansive range of emotion.